When it comes to progress in the science and technology sector, how wide is the gap between Istanbul and the rest of Turkey? A new report considers economic and social regional disparities and the concentration of economic activity.

How do refugees affect social life in host communities? A new paper on Congolese refugees in Rwanda compares feelings of safety, social networks and trust at varying distances from a refugee camp.

Could there be a silver lining to the weakening of social and welfare policies worldwide? A new article pioneers an integrated perspective for understanding and measuring social innovation ecosystems.

These are just a few of the questions tackled by our researchers in October 2019 — in six journal articles, six working papers and two policy briefs, among many others. Click here for the full list of our most recent publications.

‘How do refugees affect social life in host communities? The case of Congolese refugees in Rwanda‘ investigates how social dimensions of life in local communities are affected by the long-term presence of Congolese refugees in Rwanda, paying particular attention to feelings of safety, social networks and trust. To gauge whether increased probability of interaction with refugees reduces cohesion, this paper compares these outcomes across local households at varying distances from a refugee camp. The quantitative analysis shows no statistically significant differences between host communities with the exception of informal social networks, which are higher in communities closer to refugee camps. However, qualitative evidence illustrates how greater (economic) interaction between the two populations helps increase trust between refugees and host communities over time. Moreover, locals argue that economic and social support given to refugees plays a key role in reducing and preventing conflict between the two groups. These findings map the experiences and give voice to host communities’ perspectives on social life in their community. By Veronika Fajth, Dr. Özge Bilgili, Dr. Craig Loschmann, Prof. Melissa Siegel.

‘Manufacturing growth accelerations in developing countries‘ investigates the factors driving manufacturing growth accelerations in a sample of 134 developing countries over the period 1970 to 2014. The article shows that human capital and institutions represent contextual factors that favour the growth of manufacturing, together with macroeconomic policies related to investment, and openness to foreign trade and capital. It also finds that most of these factors not only foster episodic accelerations of industry, but that they contribute as well to a sustained process of industrialisation that characterised the process of economic growth of a few successful countries over the period 1970 to 2014. By Dr. Bruno Martorano et al.

‘The effect of past health events on intentions to purchase insurance: Evidence from 11 countries‘ investigates whether past negative health experiences are positively associated with intentions to purchase insurance to mitigate the risks of income losses due to illnesses and disabilities. The article shows that agents who have personally experienced a negative health event in the past are 25 per cent more likely to state the intention to purchase income protection insurance than those who have not had such an experience. Moreover, personally knowing someone who suffered from ill health increases intentions by 40 per cent. Insurance ownership increases by 23 per cent due to personal experience and by 31 percent because of vicarious experience. By Dr. Stefania Innocenti et al.

‘Smuggling, trafficking, and extortion: New conceptual and policy challenges on the Libyan Route to Europe‘ offers a conceptual and empirical reflection on the relationship between human smuggling, trafficking and kidnapping, and extortion in Libya. It is based on qualitative interview data with Eritrean asylum seekers in Italy. Different tribal regimes control separate territories in Libya, which leads to different experiences for migrants depending on which territory they enter, such as Eritreans entering in the southeast Toubou controlled territory. The study puts forth that the kidnapping and extortion experienced by Eritreans in Libya is neither trafficking, nor smuggling, but a crime against humanity orchestrated by an organised criminal network. The paper details this argument and discusses the implications. The study is also illustrated with a video (below). By Dr. Katherine Kuschminder et al.

‘Improving access to labour markets for refugees: Evidence from Uganda’ studies the constraints incurred by refugees in a country that is characterised by an open policy towards displaced people. Indeed, the Ugandan policy grants complete freedom of movement and full rights to work. The study finds however that even with open refugee policies, there are obstacles that prevent refugees entering the labour market in Uganda, the third largest refugee hosting country in the world. These obstacles affect both the demand and supply side of labour markets. The findings suggest the main obstacles on the labour demand side are that Ugandan firms discriminate against refugee job seekers and have either unclear incorrect information regarding the legal status of refugees in the country. The researchers also find that refugees in urban areas tend to be less trusting of Ugandans and that refugees in rural areas would be willing to migrate to cities if they thought they were likely to get a job and (relatedly) if they had personal connections in the city. By PhD fellow Mariajose Silva Vargas et al.

‘A summary of selected innovation-related indicators for Turkey‘ focuses on one dimension of economic activity, the R&D and Innovation-related sectors, as major drivers of regional economic growth, and hence, powerful causes and consequences of spatial agglomeration and concentration. The indicators summarised in this report represent outcomes regarding the science and technology sector and the technical progress related determinants of the regions of Turkey. A wide gap between Istanbul and the rest of the country is visible for almost all variables. This observation is in parallel with the existing economic and social regional disparities in Turkey. The report also illustrates the evident issue of insufficient spatial data for Turkey and notes that it is particularly essential that indicators should be reported in the provincial level as well. It argues that regional groupings and the lack of industry specific classifications create a substantial challenge for researchers and policymakers – particularly when the goal is to provide policy-related findings regarding the concentration of economic activity over space in Turkey. By Dr. Mehmet Guney Celbis.

‘Analysis of patents, publications and new organisations from FP7-ICT and CIP-ICT projects’ provides an in-depth examination of the publications and patents reported through the yearly survey waves undertaken by DG CNECT in the years 2008-2017. It is also the culmination of two consecutive ex-post research evaluations, of which the first exercise starting in 2012 and the second in 2016. The results of both these research assessments, SMART 2011/0039 and SMART 2015/0078, are created in this report. The report covers the entirety of the FP7 projects launched during the years 2007 to 2013, for their productive years from 2007 to 2016, More information By Ad Notten, Dr. Jojo Jacob, Dr. Bulat Sanditov et al. 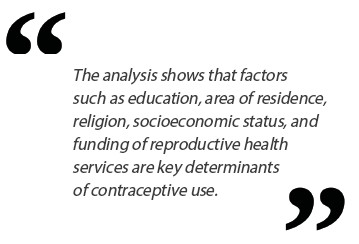 ‘Women’s political and reproductive health empowerment in Africa: A literature review‘ examines recent literature on the determinants of women’s political and reproductive health empowerment in Africa and tracks the progress that has been made during the Millennium Development Goals period and onwards. The analysis shows that factors such as education, area of residence, religion, socioeconomic status, and funding of reproductive health services are key determinants of contraceptive use. It has several implications for SDG 5 on gender equality and women’s empowerment, more specifically targets 5.4 and 5.6.  By Dr. Maty Konte, PhD fellows Victor Osei Kwadwo and Tatenda Zinyemba.

‘Remittances and bribery in Africa‘ examines the effects of remittances on bribe payments to public officials to access public goods and services in Africa. We argue that migrant remittances may affect bribery among remittance recipients through the income and norm channels. Using Afrobarometer surveys administered in thirty-six African countries between 2004 and 2016, the paper finds that remittance receivers are more prone to bribe payment than non-receivers. More importantly, it finds that individuals who live in countries with higher levels of remittances as a share of gross domestic product (GDP) are more likely to pay bribes than individuals from countries with lower remittances as a share of GDP, which supports the income channel. However, the positive link between remittances and bribery diminishes in countries with a high level of control over corruption. When looking at the stock of migrants living abroad, the paper finds that citizens from African countries that record a high stock of migrants living in OECD countries are less likely to pay bribe than citizens from African countries with lower level of stock of migrants in OECD countries. This finding is in line with the norm channel, but more data are needed for a better understanding of this mechanism. By Dr. Maty Konte and Dr. Gideon Ndubuisi.

‘Corruption and tax morale in Africa‘ analyses the effect of the quality of governance (proxied by perceived corruption) on attitude towards paying tax. Using the Afrobarometer surveys from 36 African countries over the period 2011–2015, the paper finds low perception of corruption of different levels of the Executive branch (President Office, Government Officials or Tax Authorities) has a significant and positive impact on tax morale. To account for possible reverse causality between a citizen’s perception of governance quality and attitude towards tax payment, the authors also propose an IV approach, using the ethnicity of the country’s leader as instrument for perceived level of corruption. The IV results confirm that an individual’s positive perception of governance has a positive impact on its willingness to pay tax. By Dr. Maty Konte et al.

‘Mining and quality of public services: The role of local governance and decentralisation‘ investigates the effects of mining on the quality of public services – as reported by the citizens – and on people’s optimism about their future living conditions. More particularly, the paper examines how the quality of local governance and the level of decentralisation may shape the proximity to mine effects. By Dr. Maty Konte and PhD fellow Rose Vincent.

‘Empirical assessments of the development impacts of migration’ reviews key concepts and methodological approaches to date and provides suggestions for future research. The paper argues that investigating the development impacts of migration using a holistic, multi-dimensional approach would add value to existing evidence. It suggest that without experimental data, researchers can include design features such as retrospective data and collection of complementary community-level data to reduce estimation bias due to self-selection. It advises future research to fill an important gap by collecting and analysing data related to the development impacts of involuntary immobility. By Dr. Lisa Andersson and Prof. Melissa Siegel.

‘Socioeconomic inequality and student outcomes: Cross-national trends, policies, and practices’ provides a cross-national analysis of policy approaches designed to address socioeconomic inequality. The book examines socioeconomic inequality and student outcomes across various Western industrialised nations and the varying success they have had in addressing achievement gaps in lower socioeconomic status student populations. It presents the national profiles of countries with notable achievement gaps within the respective school-aged student populations, explains the trajectory of achievement results in relation to both national and international large-scale assessment measures, and discusses how relevant education policies have evolved within their national contexts. Most importantly, the national profiles investigate the effectiveness of policy responses that have been adopted to close the achievement gap in lower socioeconomic status student populations. Edited by Prof. Louis Volante et al.

‘New mindsets to innovate activation‘ rethinks activation policy by moving away from a narrow focus on individual responsibility, and by re-embedding economic actions into a social context. This thesis looks at the design of the Dutch social assistance scheme and activation policy (governed by the 2015 Participation Act), mainly from the point of view of the lived experiences of recipients and with particular emphasis on their relative position in society. The thesis concludes that the terms activation and responsibility and their uses need to be critically rethought, as they are loaded with assumptions about behaviour that not only lead to inefficient policies, but can indeed create “potential longer term, more insidious, ‘side-effects’”. By Dr. Mira Bierbaum.