Can we have growth when population is stagnant? A new working paper gives up common simplifying assumptions — and finds long-run economic growth can remain positive even if population growth levels off. What’s more, long-run results are internationally connected.

These are just two of the questions tackled by our researchers in June 2019 — in six journal articles, three working papers and two book chapters, among many others. Click here for the full list of our most recent publications.

‘Sectoral cognitive skills, R&D, and productivity: A cross-country cross-sector analysis’ focuses on human capital measured by skills and analyses its relationship with R&D investments and productivity across 12 OECD economies and 17 industries. The article computes a measure of sectoral human capital defined as the average cognitive skills of the workforce in each country-sector combination. The variation in labour productivity that can be explained by human capital is remarkably large when measured by the sectoral skills, whereas it appears statistically insignificant when measured by the sectoral school attainment. This suggests that using measures of sectoral cognitive skills can represent a major step forward in any future sectoral growth accounting exercise. By Dr. Simone Sasso and Prof. Jo Ritzen.

‘Knowledge flows from public science to industrial technologies’ investigates what types of scientific research can help improve the quality of technologies. This study uses backward and forward citation analysis, extracted from the Derwent World Patents Index. Non-patent citations from each patent are further connected with records indexed in Web of Science, and the forward citations for the cited articles are collected. On the one hand, the results confirm that there is an important contribution from science to technology. High-quality academic research has significantly contributed to the development of high-quality patents. On the other hand, this study also reveals the heterogeneous pattern of patents citing scientific publications, depending on the organizational type, country, and knowledge origin. Compared to those in the U.S., patents developed by Chinese inventors tend to reply on more recent science but with a narrower scientific scope. By Dr. Lili Wang et al.

‘Effects of health insurance on labour supply: Evidence from the Health Care Fund for the Poor in Vietnam’ examines the labour supply effects of the Health Care Fund for the Poor (HCFP) in Vietnam by looking at the monthly number of work hours and the probability of employment. The article shows that HCFP, which aims to provide poor people and disadvantaged minority groups with free health insurance, has a positive labour supply effect in the short run. However, in the longer run, the net effect becomes negative due to the income effect. This is manifested in both average work hours per month and the probability of employment, albeit the effect on the latter is statistically insignificant. Interestingly, the finding of the income effect is mainly driven by the non-poor recipients living in rural areas. This raises the question of targeting strategy of the programme to avoid unintended labour supply distortion. By PhD fellow Nga Le, Prof. Wim Groot, Dr. Sonila Tomini et al.

‘Self-efficacy beliefs and imitation: a two armed bandit experiment.’ investigates the extent to which self-efficacy beliefs affect agents’ propensities to imitate others. It is generally believed that individuals imitate others to gain status, minimise regret or simply ameliorate their performance. Psychology provides a complementary explanation: imitation becomes appealing when agents have little faith in their abilities. The article finds that, in stable environments, a 1% increase in individual self-efficacy reduces the propensity to imitate others by 3%. By Dr. Stefania Innocenti and Prof. Robin Cowan. 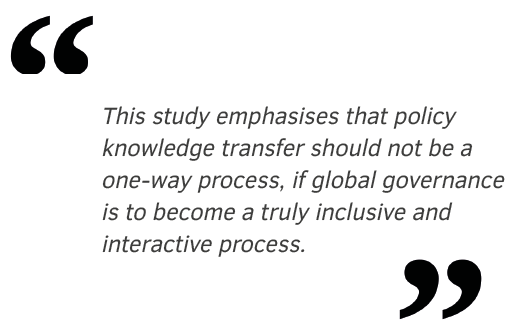 ‘Multiplex learning: An evidence-based approach to design policy learning networks in sub-Saharan Africa for the SDGs.’ This study emphasises that policy knowledge transfer should not be a one-way process, if global governance is to become a truly inclusive and interactive process. One fundamental problem to this end is the design of such multiplex policy learning networks. Using quantitative analysis, the authors identify performance-based clusters of status leaders, intermediates and followers in sub-Saharan Africa with respect to the constituents of indicator-based performances on each SDG, and offer a detailed contextualisation for multiplex policy learning in sub-Saharan Africa with a prospective design of an international conference agenda for SDGs. By Dr. Serdar Turkeli, Dr. Pui-hang Wong and Dr. Eleni Abraham Yitbarek.

‘Can we have growth when population is stagnant? Testing linear growth rate formulas and their cross-unit cointegration of non-scale endogenous growth models’ classifies fully and semi-endogenous growth models in six categories according to the slopes and intercepts of the linear relation between income and population growth. The crucial step for the empirical work is to give up the simplifying assumption of growth models that population growth is exogenous and test it instead. Results favour fully over semi-endogenous growth with and without slope homogeneity and allow for growth rate policies. The more frequent case is that long-run growth can remain positive if population stops growing. Analysis of cross-unit cointegration suggests that long-run results are internationally connected. By Dr. Thomas Ziesemer.

‘Embodied and disembodied technological change: the sectoral patterns of job-creation and job-destruction’ addresses, both theoretically and empirically, the sectoral patterns of job creation and job destruction in order to distinguish the alternative effects of embodied vs disembodied technological change operating into a vertically connected economy. The study shows that disembodied technological change turns out to positively affect employment dynamics in the “upstream’’ sectors, while expansionary investment does so in the “downstream’’ industries. Conversely, the replacement of obsolete capital vintages tends to exert a negative impact on labour demand, although this effect turns out to be statistically less robust. By Prof. Marco Vivarelli et al.

‘Institutional isomorphism and policy transfer in public management reforms: Three stories about public procurement agencification in Latin America’ uses theoretical literature on new public management, institutional isomorphism and policy transfer combined with empirical work to elaborate on a qualitative comparative review of three case studies: Paraguay, Panama and Colombia. It also expands on the discussion about the influences that have enabled a phenomenon that in the dissertation has been called agencification in public procurement. The empirical results, combined with the theoretical implications, indicate that  although it is assumed that these agencies were the result of  the idea of achieving more efficiency in public procurement in reality the phenomenon is heavily influenced by the institutional isomorphic pressures that countries faced, the evolution of public procurement as a field as well as the environmental interpretation that diverse actors derived when deciding and establishing these entities. It also confirms that International Organisations act as enablers of isomorphism and play a critical role in spreading the idea of agencification, as they do with other elements when public management reforms are implemented through policy transfer processes. By Dr. Ana Cristina Calderon Ramirez.