Many institutions play a vital role in sub-Saharan aid effectiveness — but how important is donor specialisation? Foreign-owned firms are more likely to cooperate with foreign universities — but is this true across Europe? And when it comes to regulating the digital economy, are we moving towards a ‘win-win’ or a ‘lose-lose’ scenario in WTO policymaking? These are just a few of the questions tackled by our researchers in January 2018 — in two policy briefs, four journal articles, and six working papers, among many others. Click here for the full list of our most recent publications.

‘Nonfarm enterprises in rural Africa’ is a chapter in the book ‘Agriculture in Africa – Telling Myths from Facts‘. The study uses newly gathered, nationally representative, geo-referenced information at the household and plot level from six African countries to bring a more refined, empirically grounded understanding of the complex reality of African agriculture. It examines every aspect of farming and non-farming life —from the plots farmers cultivate, the crops they grow, the harvest that is achieved, and the inputs they use, to all the other sources of income they rely on and the risks they face. The chapter shows that nonfarm enterprises will benefit from policies that improve the business environment and assist rural households to manage and cope with risk. By Dr. Paula Nagler and Prof. Wim Naudé.

‘Does integrating AIDS treatment with food assistance affect labor supply? Evidence from Zambia’ uses primary data to examine the short-term impact of a food assistance program on labour supply as measured by the hours worked, labour market participation rates and transitions to employment within HIV/AIDS affected households in Zambia. The study finds that food assistance is generally a labour supply disincentive to HIV-infected patients receiving treatment as it reduced their hours worked by up to 54%, transitions to employment by up to 70% and also reduced the labour market participation rates of male patients by 72%. These findings suggest that food assistance can inadvertently reduce the labour supply of HIV-infected individuals, but this is compensated for by the increased labour supply among other family members. By Dr. Nyasha Tirivayi et al. 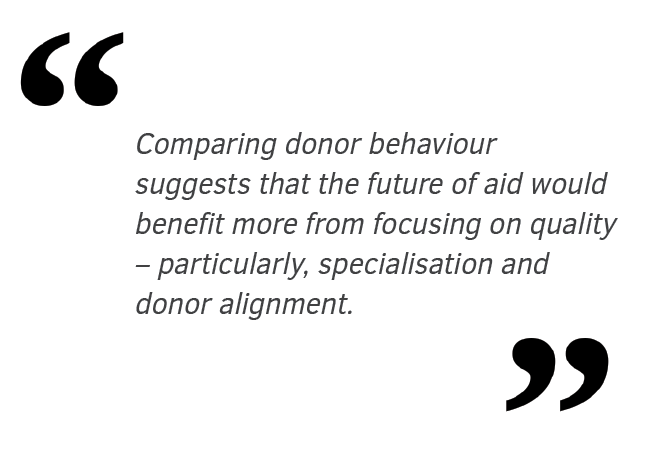 ‘Aid, institutions and economic growth in sub-Saharan Africa: Heterogeneous donors and heterogeneous responses‘ contributes to the aid-effectiveness debate using panel data from 43 sub-Saharan African countries over the period 1980–2013. The study‘s novelty lies in assessing the intermediary role of institutions and the importance of recipient and donor heterogeneity. Comparing donor behaviour suggests that the future of aid would benefit more from focusing on quality – particularly, specialisation and donor alignment. By PhD fellow Hassen Wako.

‘Rates of return to social protection: Social cash transfers in Uganda‘ is part of a wider research project entitled ‘Building the Economic Case for Investments in Social Protection’, which aims at demonstrating the potential impacts of social protection on inclusive growth. This policy brief simulates the rates of return to a country-wide rollout of Uganda’s Social Assistance Grants for Empowerment (SAGE) programmes. By Dr. Stephan Dietrich and Prof. Franziska Gassmann.

‘The economic impacts of social cash transfers in integrated and remote Areas in Uganda‘ is a policy brief that analyses the differences in the economic impacts of social cash transfers (SCTs) between more remote and more integrated areas. Like the brief above, it is part of a wider research project entitled ‘Building the Economic Case for Investments in Social Protection’, which aims at demonstrating the potential impacts of social protection on inclusive growth. By PhD fellow Maria Klara Kuss and Prof. Franziska Gassmann.

‘The economic impacts of a social pension on recipient households with unequal access to markets in Uganda‘ analyses the differences in the economic impacts of social cash transfers (SCT) on recipients in remote and integrated areas. Using a mixed methods-research design and the case of Uganda’s Senior Citizens Grant (SCG), this paper confirms that structural circumstances (such as market access) shape the economic outcomes of cash transfers for recipients. By PhD fellow Maria Klara Kuss, researcher Patrick Llewellin and Prof. Franziska Gassmann.

‘Regulating the digital economy: Are we moving towards a ‘win-win’ or a ‘lose-lose’?’  focuses on the challenges in regulating the digital economy, with a particular focus on development, and offers a discussion of the interdependency between the economic, social, personal and developmental aspects of digital trade for developing countries. The incoherence between digital realities and the policy debates at the WTO are presented in this paper to show how the institution is losing effectiveness in the war between countries to legitimise national policies on a universal level in this important area of policymaking. By Padmashree Gehl Sampath.

‘The relevance of local structures for economic multiplier effects of social pensions in Uganda’ provides insights into the differences in economic multiplier effects of Social Cash Transfers in unequal structural settings. This paper confirms that there are considerable differences in the scope of economic multipliers between structurally integrated and remote areas. Integrated communities are in a better position to access the secondary benefits of the SCG since they are better able to respond to the increased demand by recipients with higher value and more lucrative investments. Moreover, community members in integrated areas are also more likely to benefit from improvements of already existing infrastructures and services than community members in remote areas where at times growth-enhancing structures and services remain entirely absent. The paper concludes that the expansion of SCTs in low-income countries should be accompanied by measures that reduce pre-existing structural inequalities across areas. By PhD fellow Maria Klara Kuss, researcher Firminus Mugumya and Prof. Franziska Gassmann.

‘Instability constraints and development traps: An empirical analysis of growth cycles and economic volatility in Latin America’ consists of empirically testing Latin America’s volatility characteristics in terms of cycles. The main conclusions of this paper point that in the majority of Latin American countries the relative dominance of the long-run economic cycles explain the overall volatility. Exceptions are Mexico, Colombia and Chile, where the short-run cycle shows a higher relative importance. Data shows that LAC is not the most volatile region of the world, but it has some characteristics as a region in terms of the origin of their volatility. By PhD fellow Danilo Sartorello Spinola. 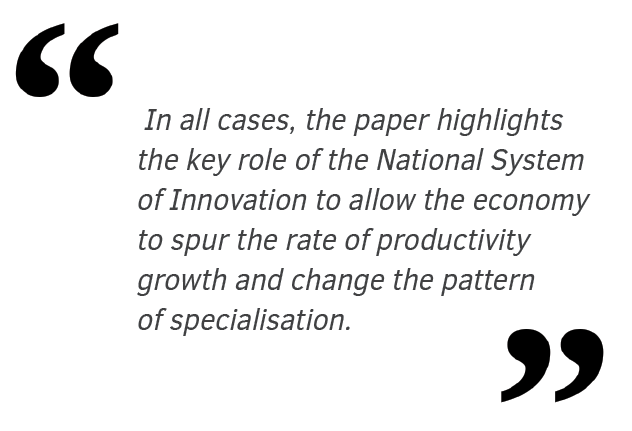 ‘Natural, effective and BOP-constrained rates of growth: Adjustment mechanisms and closure equations’ discusses different adjustment mechanisms to ensure the convergence of the effective rate of growth, the natural rate of growth and BOP-constrained rate of growth. In all cases, the paper highlights the key role of the National System of Innovation to allow the economy to spur the rate of productivity growth and change the pattern of specialisation. It also stresses that structural change policies aimed at boosting aggregate effective demand (moving towards sectors with higher income elasticity of exports) are crucial to sustain rapid productivity growth without compromising full employment. By PhD fellow Danilo Sartorello Spinola et al.