What precipitates protests in Latin America? Is it failing institutions, low standards of living, high levels of corruption — or a combination of factors? A new journal article explores the desire for redistribution linked to participation in protests.

Does it pay to be avant-garde and do “novel” science? A new study investigates selection patterns across Swiss research programmes — and finds that innovative scientists are more likely to apply for research funds but are less likely to win.

What shapes attitudes of gender equality and domestic violence across the Arab world? A new paper looks at the framing of questions, emphasis or “priming”, combined with the gender of interviewers and their perceived piety.

These are just a few of the questions tackled by our researchers in September 2019 — in five journal articles, 14 working papers and one PhD dissertation, among many others. Click here for the full list of our most recent publications.

‘Redistributive preferences and protests in Latin America‘ analyses the role of individual redistributive preferences on protest participation. The article focuses on Latin America, a region that has experienced substantial protests and demonstrations in the last decade. The results show evidence for an association between strong individual preferences for redistribution and participation in protests motivated by the low quality of services and institutions, failures to reduce corruption, and perceived lower standards of living. By Dr. Bruno Martorano et al.

‘Crop diversity, household welfare and consumption smoothing under risk: Evidence from rural Uganda‘ studies the welfare and risk coping effects of crop diversity in rural Uganda. The study finds that crop diversification increases household diet diversity and consumption and that the effect on consumption is higher for relatively poor households. Overall, the findings suggest that crop diversity reduces the need for informal insurance as risk coping strategy and that transforming agriculture towards a more diversified cropping system is a viable pathway for improving diets, welfare, risk management and the resilience of rural households. By Dr. Wondimagegn Tesfaye and Dr. Nyasha Tirivayi.

‘The effect of collaborations on scientific research output: the case of nanoscience in Chinese regions, Scientometrics‘ investigates the effect of various collaborations on regional scientific output. Results highlight the differences between collaboration effects across regions at various capability levels. Scientifically weak regions benefit from more concentrated collaboration, in particular with advanced domestic regions. However, scientifically strong regions can benefit from a centrally located position in a broader collaboration network. The findings indicate that international collaborations might not be beneficial a priori. Whether or not one region benefits from international collaborations depends on this region’s local capacity. Being embedded in a broad network structure can help increase one region’s publication output. However, such benefit is limited only to regions that have relatively higher research capacity. by Dr. Lili Wang et al. 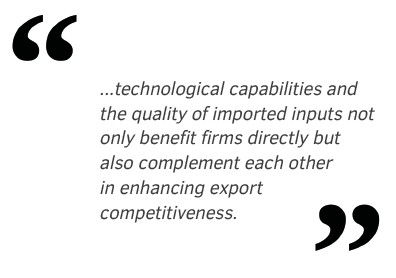 ‘Regulation and innovation under Industry 4.0: Case of medical/healthcare robot‘ studies the case of a successful medical/healthcare robotics company in Japan, Cyberdyne, to examine how products based on emerging technologies are commercialised, through the use of firm strategies and by overcoming existing regulatory barriers on safety. Cyberdyne developed and commercialised the world’s first product using cybernics in wearable medical/healthcare device. The case illustrates the increasing complexity of safety regulations and role of standards for firms to innovate applying emerging technologies. By Dr. Michiko Iizuka et al.

‘Does it pay to do novel science? The selectivity patterns in science funding‘ brings evidence that the funding process is not always awarding the most novel scientists. Exploiting rich data on all applications to a leading Swiss research funding programme, the study finds that novel scientists have a higher probability of applying for funds than non-novel scientists, but they get on average lower ratings by grant evaluators and have lower chances of being funded. By Dr. Fabiana Visentin et al.

‘The effects of R&D subsidies and publicly performed R&D on business R&D: A survey‘ shows that a majority of studies finds complementarity of R&D subsidies and tax credits with private R&D expenditures. A non‐negligible minority finds incomplete crowding out. Full crowding out is found only for small parts of the respective samples or small sub‐ sectors of the economy under consideration. Education R&D and publicly performed R&D stimulate private R&D according to a small literature. The article focuses on the exceptions from these dominant results. The controversies concern firm size, interaction of policy instruments, and effectiveness of parts of publicly performed R&D. There are important suggestions for future research derived from this literature review: (i) use of dynamic models with adequate time lags, (ii) explaining effects of country and firm heterogeneity. By Dr. Thomas Ziesemer.

‘A comment on the multifaceted relationship between multinational enterprises and within-country inequality‘ seeks to broaden the study of inequality beyond income levels, as this is just one aspect of inequality that shapes or impedes human development. The authors believe that it is necessary – for both MNEs and policymakers – to have a more nuanced understanding of how, and under what circumstances, the presence of MNEs affects inequality in host economies. By Prof. Rajneesh Narula et al.

‘Enforcing higher labour standards within developing country value chains: Consequences for MNEs and informal actors in a dual economy‘ examines the effects of higher labour standards in apparel global value chains (GVCs). Stakeholders now expect MNEs to take ‘full-chain’ responsibility. However, the increased monitoring and enforcement costs of a large network of suppliers have been non-trivial. By seeking to strictly enforce compliance, MNEs are attenuating some of the positive effects of MNE investment, particularly the prospects for employment creation (especially among women), and enterprise growth in the informal sector. The paper discusses how these observations might inform other cross-disciplinary work in development, ethics, and sociology. By Prof. Rajneesh Narula.

‘The Potential for innovation in mining value chains. Evidence from Latin America‘ tries to broaden the scope and understanding of innovation in the mining sector, with a focus on emerging countries based on the experience of Latin America. It discusses the innovation processes that are developing in the mining sector of emerging countries, and uses the global value chains (GVC) approach to analyse the potential available to local firms. The focus is on all forms of innovation, not only those eventually subject to patenting, to include innovations in products and processes, but also in business, marketing and organisational models and practices. The paper argues that there is a need to rethink and innovate policy approaches, if countries aim at scaling up and broadening the many good examples of innovative suppliers. By Dr. Michiko Iizuka, Prof. Carlo Pietrobelli and PhD fellow Fernando Vargas.

‘Testing the employment and skill impact of new technologies: A survey and some methodological issues‘ aims at providing an updated picture of main empirical evidence on the relationship between new technologies and employment both in terms of overall consequences on the number of employees, tasks required, and wage/inequality effect. A paper by Prof. Marco Vivarelli  et al.

‘Modern industrial policy in Latin America: Lessons from cluster development policies‘ examines how industrial clusters have developed in many regions and countries of Latin America, often with the active support of public policies at the national (federal) and local levels, and sometimes with the financial and technical assistance of international organisations. The study says that these experiences have been most remarkable, and share several elements of the ‘modern’ industrial policies that enjoy an increasing consensus in the literature. The vast experience of locally based forms of active policies that have proliferated in Latin America reflects a modern approach to industrial policies, and an example for other developing countries. Such approach has typically included clever interactions of private and government sectors, a process of search and discovery of the necessary public policy inputs, and an interactive design and implementation of these policies. By Prof. Carlo Pietrobelli.

‘The decline in entrepreneurship in the West: Is complexity ossifying the economy?‘ seeks to understand why entrepreneurship in most advanced economies is in decline, in contradiction to what many scholars had expected. The paper first documents the extent of the decline in terms of entrepreneurial entry rates; the share of young and small firms; and in terms of labour market mobility and in innovativeness, and then critically discusses the explanations that have been offered in the literature. The author argues that we need to consider the potential of negative scale effects and evolutionary pressures from rising complexity, as well as long-run changes in aggregate demand and energy costs. By Prof. Wim Naudé.

‘Japan’s productivity and GDP growth: The role of GBAORD, public and foreign R&D‘ analyses the dynamic interaction of Japan’s total factor productivity (TFP), GDP, domestic and foreign private and public R&D as well as mission-oriented R&D, GBAORD, in a cointegrated VAR for Japan with data from 1988-2014. Analysis of effects of permanent shocks shows that (i) public R&D, unlike GBAORD, encourages private R&D and TFP, and has high internal rates of return. (ii) Japan’s public and private R&D have a statistically significant positive effect on foreign private and public R&D stocks and vice versa. (iii) After transitory GDP shocks, public and private R&D are counter-cyclical and GBAORD is pro-cyclical in Japan. A paper by Dr. Thomas Ziesemer.

‘Characterizing growth instability: new evidence on unit roots and structural breaks in long run time series‘ investigates whether long run time series of income per capita are better described by a trend-stationary model with few structural changes or by unit root processes in which permanent stochastic shocks are responsible for the observed growth discontinuities. As compared to previous findings in the literature, the study finds less evidence against the unit root hypothesis. Failures to reject the I(1) null are particularly strong for a set of developing countries considered. Finally, even less rejections are found when relaxing the assumption of Gaussian shocks. By Dr. Neil Foster-McGregor, Prof. Bart Verspagen et al.

‘The Extent of GVC Engagement in Sub-Saharan Africa’ exploits information from two different datasets to provide a novel and multi-dimensional picture of the engagement of all sub-Saharan African countries in global value chains (GVCs). The study documents in detail the nature of the underlying data and the way it is used to construct several indicators of GVC engagement. Two patterns stand out. First, the level of GVC engagement of most countries in sub-Saharan Africa is rather low, especially for their manufacturing sectors. Second, while there is increased GVC engagement over time in some countries, this pattern is by no means universal. The average engagement for the region over the time period studied (1995–2018) is not even positive on average across countries for several indicators. By PhD fellow Emmanuel Mensa et al.