Why give social protection to protracted refugees? Time to refocus responsibilities and moral obligations

by UNU-MERIT
social protection, UNHCR, WFP
Comments are off

The paradigm of long-term delivery of short-term aid needs to be reconsidered — because the current system is barely functional or sustainable. This implies building a new bridge between humanitarian aid and long-term human development. But what exactly does that mean? A key part of the process is to examine the many complex factors at play, including the issue of responsibility. This post considers the moral nature of the so-called ‘duty bearer’ in more detail.

Of the world’s 68.5 million displaced persons, the majority are in a protracted refugee situation: more than five years into their plight, with no prospect of a solution, leaving them living in limbo often with the bare minimum of protection. Despite the wide ratification of the 1952 Convention on the Status of Refugees, most refugees are still reliant on politically fungible agreements, the generosity of (mostly neighbouring) host countries, and international bodies like the World Food Programme and UN High Commissioner for Refugees.

Humanitarian assistance afforded to refugees by non-state actors is meant to be short-term and is generally not accompanied by long-term benefits or rights which is often the case with state-backed social protection systems and instruments. This carries serious long-term implications for education, healthcare and pensions. Moreover, their agency is further restricted by the lack of mobility, refugees are restricted from employment access and market participation.  All of which is alas known and yet seemingly inescapable. Their omission from social protection system perpetuates a process of social exclusion to the detriment of persons; it is this process we seek to end.

Over the past decade, a shift has been taking place on both the side of the humanitarian response and social protection. On the former, the trend has been away from the language of resilience and ‘bouncing back’ to a position of ‘build back better’ embedding development rhetoric in the language of emergency response. On the latter, scholars have moved from the concept of social assistance to social risk management to transformative social protection. Moving away from preventative and promotive measures, which usually focus on safety-net style instruments, the new paradigm embraces social justice in a bid to reduce social exclusion and discrimination. The main problem now is to move beyond the conceptual, and ensuring the indivisibility of human rights, in particular in relation to non-citizens or citizens who find themselves displaced during conflict. 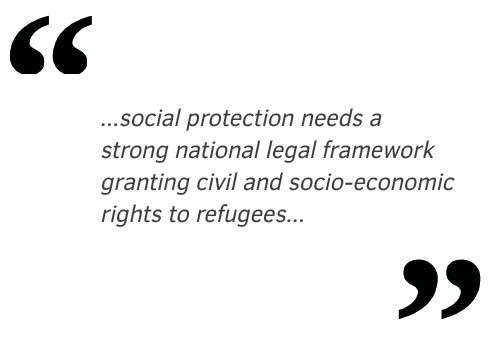 Combined with the general focus on social assistance via cash transfers, vouchers or in-kind aid, most programmes are aimed at alleviating poverty. As a result, tackling the root causes moves further down the priority list. The language of transformative measures however necessitates the inclusion of the various ethnic groups within a country, but social protection provisions remain within the citizenship realm. Social protection needs a strong national legal framework granting civil and socio-economic rights to refugees; a starting point can be improving the raft of social and labour rights, so that these vulnerabilities may be reduced. This requires action on the side of the government.

Within the social justice perspective, the question arises: who is the government accountable for? Looking at it from a political philosophy angle, John Rawls claims that in forming legitimate governing bodies, people will demand that these bodies deliver a form of justice that provides them a basic protection ‘floor’ against ill-treatment and hardship. Rawls explicitly rejects the extension of this duty of redistribution beyond the nation. On the other hand, as Charles Beitz points out, Rawls also holds positions that yield a reason why citizens in rich countries should support policies aimed at helping at least some poor societies. Beitz, in his works on cosmopolitanism, however, adds that a global distributive justice pertains not only to inter-country transfer payments (i.e. foreign aid), but also “the basic structure of international society – that is, the economic, political and legal institutions and practices that influence the global distribution of advantages”. This follows the conception of international human rights law, such as the International Covenant on Economic, Social and Cultural Rights (ICESCR), as also confirmed in Article 3 of the UN Refugee Convention.

Theorists including Thomas Pogge and David Miller have extended Rawls’ theory beyond national borders. Of key importance here is the notion of responsibility for actions that affect populations negatively. According to Pogge, it is extremely difficult for a major power to distance itself from responsibility for actions (often through ‘colonial relations’) which have worked against another nation. Therefore the international community has an obligation to the relief of the individual suffering and poverty. In this context, Miller goes as far as saying that States have a moral responsibility to alleviate the suffering of refugees if they fail to take sufficient remedial steps or acts in their immediate interest by contributing to the conflict either directly or indirectly.

While recognising the role of different actors, the government still holds a primary responsibility for all people residing within its territory from both a human rights and political philosophy perspective. Simultaneously, it ought to be recognised that governments cannot be held solely responsible and in case of situations with transnational implications, such as conflict, responsibility of the international community should also be upheld.

The puzzle on social protection delivery to displaced persons – albeit internally or internationally – is complicated, especially when considering the different stages alongside the displacement process. This however should not be a barrier in innovatively deliberating a rights-based policy framework that aims simultaneously at meeting basic needs while creating opportunities to ensure adequate and sustainable social protection.