by UNU-MERIT
Africa, alumni, peacekeeping
Comments are off 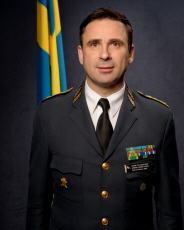 Lieutenant General Gyllensporre holds a Doctor of Philosophy degree from Maastricht University, gained in 2010 via our Dual Career Training Programme in Governance and Policy Analysis (GPAC²). His thesis focused on ‘Competing and Complementarity Perspectives on the EU as a Crisis Actor – Management Actor: An Examination of the Common Security and Defence Policy through the Lenses of Idealism and Realism’.

Gyllensporre is also an Associate Professor in Strategy and Political Science at the Swedish Defence University, a member of the Royal Swedish Academy of War Sciences and of the advisory council of the Swedish Civil Contingencies Agency, and a board member of the Anna Lindh Academy, Sweden.

As the Chief of the Swedish Defence Staff and Head of Special Forces since November 2014, Lieutenant General Gyllensporre has had a long and distinguished career since joining the Swedish Army in 1983.  Between 2008 and 2014, he served as Chief of Staff of the Supreme Commanders Staff, Head of the Force Development Department, as well as Head of the Plans and Policy Department in the Swedish Armed Forces Headquarters.  From 2001 to 2002, he commanded a battalion at the 19th Infantry Regiment.

He also has extensive international operational experience, notably as liaison officer in Bosnia Herzegovina during the NATO-led Stabilization Force operation in 1997‑1998, as Vice-Chairman and Chief Operations Officer at the Joint Military Commission, Nuba Mountains, Sudan, from 2002 to 2003, as head of Doctrine and Concepts Branch at the European Union Military Staff in Brussels, Belgium, from 2005 to 2008, and as the Chief of Staff in Regional Command North of the International Security Assistance Force, the NATO-led operation in Afghanistan in 2008.

See the infographic below for more details on the UN Multidimensional Integrated Stabilization Mission in Mali (MINUSMA).