by Elaine McGregor
migration, United Nations
Comments are off 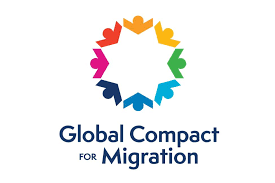 In April 2022, UNU joined other UN entities in endorsing a UN System pledge on the Global Compact for Safe, Orderly and Regular Migration (GCM). In this blog series, members of the United Nations University Migration Network (UNU-MN) and guest contributors reflect on the equitable and evidence-based implementation of the GCM in policy and practice. In this first blog of the series, Dr Elaine Lebon-McGregor (UNU-MERIT) reflects on what we can really say about progress in implementing the GCM.

Next week, States will gather at the United Nations Headquarters in New York for the first-ever International Migration Review Forum (IMRF). The IMRF was conceptualised in the Global Compact for Safe Orderly and Regular Migration (GCM) to allow States to reflect on progress made in implementing the commitments agreed upon by 152 states in the GCM in 2018.

The GCM is non-binding. If it was not, it is unlikely that it would even exist. This, however, means that, unlike international conventions, such as the, albeit poorly ratified, 1990 International Convention on the Protection of the Rights of All Migrant Workers and Members of their Families, no formal mechanism exists for its review. In other words, States are not obliged to report on GCM implementation. Yet, significantly, between 2020 and 2021, 86 States voluntarily submitted their first National Voluntary Reviews (NVRs) of their implementation of the commitments outlined in the GCM.

In a forthcoming study, Daniel Naujoks (Columbia SIPA), Niels Ike (UNU-MERIT) and I review the first 86 NVRs to compare the efforts of States to present their progress – and sometimes challenges – in implementing the commitments of the GCM.

The study has revealed a great deal of diversity in the ways States have approached the exercise. A small number of States have submitted reports to present input on each of the GCM’s 23  objectives. Some States have opted to select specific priority objectives and only report on these. Yet others provided updates on their work related to migration without specifically identifying any of the GCM objectives. Some States reflect on gaps and challenges; others do not. Some States have closely followed the templates provided by the UN Regional Commissions, while others have adopted a free form approach. Some provide concrete evidence to support their claims; others do not. The resulting cacophony is hard to decipher meaningfully.

While it is not possible to provide a concrete estimate of GCM implementation, we can say that certain objectives have been more represented. The most frequently mentioned objectives include data and evidence (objective 1), return, readmission, and reintegration (objective 21), trafficking (objective 10), vulnerabilities (objective 7), and recruitment and decent work (objective 6). Despite migrant deaths, primarily in the Mediterranean, the Andaman Sea, and in Central America being one of the drivers of the New York Declaration and subsequent negotiation of the GCM alongside the Global Compact on Refugees (GCR), it is noteworthy that one of the least represented objectives is number 8, ‘Save lives and establish coordinated international efforts on missing migrants’. Other less frequently discussed objectives include detention (objective 13), discrimination (objective 17), the portability of social security (objective 22) and remittances (20).

To a certain extent, these results are not surprising. The importance of data and evidence is universally relevant for the policy process, and the majority of migrants are labour migrants. Return is high on the agenda for many States, and, in the case of the EU, cooperation on return is often a condition of cooperation on policies to open legal pathways.

Yet, next to the risk that the current approach to assessing the implementation of the GCM may lead to the relegation of key issues to the side-lines, there is also a risk that issues that have not been well-reflected in the GCM but are central to achieving its objectives, are ignored.

It is significant that the challenges of monitoring the implementation of the GCM have become part of the discussion ahead of the first IMRF. In the Report of the Secretary-General on the GCM (A/76/642), the SG draws attention to the importance of measuring progress and monitoring GCM implementation and encourages States to

‘consider how to develop benchmarks and mechanisms to measure progress on, and monitor the implementation of, the commitments in the Compact, taking account of existing mechanisms, such as the Sustainable Development Goal indicator framework, where relevant’ (para 110).

This is mirrored back to the SG in a paragraph in the fourth and final revision of the Progress Declaration which is scheduled to be adopted at the IMRF next week:

‘We request the Secretary-General, in his next biennial report, to propose, for the consideration of Member States, a limited set of indicators, drawing on the global indicator framework for the Sustainable Development Goals and targets of the 2030 Agenda for Sustainable Development as contained in General Assembly resolution 71/313 of 6 July 2017 and other relevant frameworks, to assist Member States, upon their request, in conducting inclusive reviews of progress related to the implementation of the Global Compact…’ (para 70)

There seems to be an appetite amongst States to discuss concrete ways of measuring GCM implementation. However, beyond using a ‘limited set of indicators’, States should also consider ways to develop their own ‘benchmarks and mechanisms to measure progress’.

A small minority of States have already taken heed of calls in the GCM (para 53) to develop implementation plans. The Government of Portugal was one of the first States to develop a National Plan (only available in Portuguese) to implement the GCM. The plan specifies 97 actions clustered into five thematic areas with the responsible government actor identified and a timeline established for each.  The Portuguese plan was reportedly developed in consultation with stakeholders in line with the GCM crossing cutting principles: a whole-of-government and a whole-of-society approach. Portugal, along with other States who have developed National Implementation plans, may be in a good position to share lessons learnt.

Having almost completed the first four-year cycle of GCM implementation, it is significant that States are taking note of the need for better monitoring the implementation of the GCM. Taking stock of what has been achieved (or not) thus far, both substantively, but also in terms of the supporting infrastructure, will be of relevance as we move into the second four-year cycle.

About the Author
Elaine McGregor is a researcher at UNU-MERIT and the Maastricht Graduate School of Governance. She is also the assistant coordinator of the UNU Migration Network and contact for research on policy coherence and migration governance.
Share this page