by UNU-MERIT
economics, MPP, water
Comments are off

A post by Jessica Spaus, a graduate of our MSc. in Public Policy and Human Development. NB, the next deadline for applications to our UN-backed double-degree Master’s programme is 15 July 2020.

Water is not only critical for human life – it is also a precious economic, spiritual and cultural resource. In 2015, the UN General Assembly even recognised water as a human right.

This newly minted human right is, however, under threat from trade and investment agreements, including the Investor-State Dispute Settlement (ISDS). Now, wherever they operate, companies can sue governments for discrimination. This may sound reasonable, but there is already an overwhelming number of cases involving conflicts of interest, inconsistent decisions, and massive awards. In any case, should water be a tradeable commodity ‘owned’ by major corporations? If so, this is not only a risk to public health and food security but is against the spirit of the Sustainable Development Goals.

There is currently no international framework to regulate investments, so countries usually sign bilateral or regional investment treaties. In these agreements, there is always an ISDS mechanism – implemented in secret by trade lawyers and so lacking accountability and transparency for potential conflicts of interest.

Initially conceived as a tool to protect companies against politicised nationalisations and expropriations, ISDSs are now becoming instruments for corporations to sue governments, mainly in developing countries, in protracted and expensive cases. The most significant award to-date was ordered in 2012 by the International Centre for Settlement of Investment Disputes, when Ecuador had to pay $1.77 billion (later lowered to $1.1 billion) to Occidental Petroleum, a US company, for cancellation of a contract.

Several disputes on the privatisation of water have already featured, behind closed doors, in Bilateral Investment Treaties (BITs) across Latin America. A case involving Argentina is only one example where proceedings were partly made public – and here, investment protection trumped the public interest to clean drinking water. In many water privatisation contracts, investors are often in a superior position to their hosts because the latter depend on foreign direct investments and are sometimes restricted by the terms and conditions of investment treaties.

While this has chilling effects on public interest, BITs rarely include human rights provisions. For example, they do not provide a possibility for citizens to appeal to investment tribunals for compensation. Investment arbitration tribunals arguably “lack the jurisdiction to hold states liable for breach of their human rights obligations”. Thus, where an investor and a host state commit human rights violations, it is uncertain where such considerations could be addressed during BIT arbitrations.

Right to a fair hearing 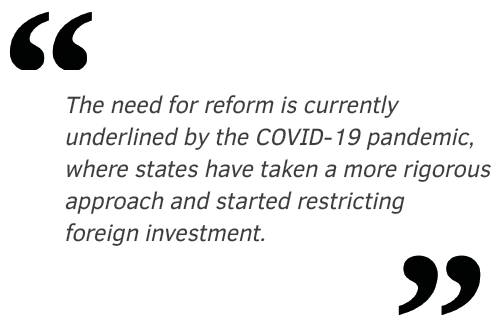 Although there have been attempts – by the European Union and the UN Conference on Trade and Development (UNCTAD) – to codify international investment law and regulate FDI flows into a single multilateral instrument, these rules form a cluttered collection of bilateral and regional investment treaties. With almost every country in the world adopting policies to attract more foreign direct investment, the international framework continues to rely on BITs.

Another solution would be to allow for adjudication in front of the International Court of Justice, which can take decisions based on equity. This would allow for more equitable and fair treatment of developing countries under threat by powerful multinational companies. Commitment to protect human rights could hence be enlarged to protect citizens where investors can be held accountable for violations in the host state’s jurisdiction.

Reforming ISDS is currently under discussion at the UN Commission of International Trade Law (UNCITRAL), where delegations from around 100 states have been negotiating a multilateral solution to reforming ISDS. However, as these discussions are likely to take years, it is now crucial to give developing countries the option of a fair hearing, via third-party funding transparency requirements or capacity-building. Another option would be the state right to invoke policies and trade barriers such as boycotts based on national security and the inter-connection between trade and national security. Finally, the creation of an ‘assistance mechanism’ for investment law, akin to the Advisory Centre on WTO Law, would allow states to manage their treaties and disputes more actively.

Increased transparency and accountability during arbitration proceedings and consideration of the balance of rights and obligations of states would improve ISDS processes. Ultimately, these adjudicators must strengthen the international rule of law, including human rights. Therefore, states must contribute to ensure that their domestic legislation, as well as their BITs protect human rights. Also, the right to water has to be reinforced as a guiding principle of international law, mainly because access to water is only going to increase in importance. Failing to consider human rights in investor-state disputes as a depoliticising strategy would be detrimental to people’s right to water and effective adjudication of future ISDS proceedings.

The need for reform is currently underlined by the COVID-19 pandemic, where states have taken a more rigorous approach and started restricting foreign investment. This removes the risk that opportunistic buyers could acquire or invest in weakened companies. Above all, these public order exceptions are likely to trigger investment disputes relating to the proportionality of needed public health measures. Those states hit hardest by the pandemic are also those most likely to suffer the worst from the current system.