by UNU-MERIT
climate change, policymaking, UNESCO
Comments are off 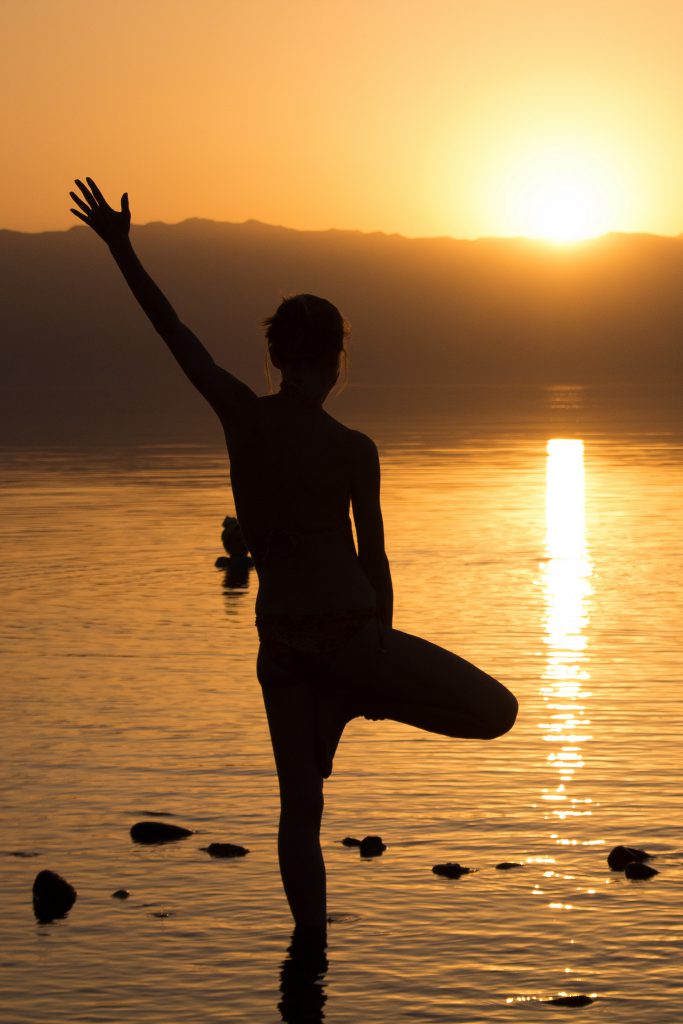 The Dead Sea, Jordan – the lowest point on Earth, where three thousand delegates at the World Science Forum are sharing the highest of aspirations: to make sure science brings ‘real change’, and perhaps even peace.

A gathering of researchers and policymakers under the patronage of Irina Bokova, Director-General of UNESCO and King Abdullah II of Jordan, this year’s forum coincides with the COP23 Climate Change Conference in Bonn as well as World Science Day for Peace and Development – a day for highlighting “the significant role of science in society and the need to engage the wider public in debates on emerging scientific issues.”

Now is a time for celebration, for coming together, but also to find new responses to critical challenges, including political attempts to sideline evidence-based research, most notably on climate change. For UNU delegates like Diego Salama and Prof. Jo Ritzen, it is self-evident that research – rather than base emotions or vested interests – should inform policymaking. So how and why has the landscape changed? The missing link appears to revolve around public trust, but trust in what exactly?

Trust is a short but important word for most people working in science, the media and government, a word that speaks to “the veracity, integrity, or other virtues of someone or something” and is a basic concept spanning generations. Yet, in 2017, public trust in core institutions is on the verge of crisis – a crisis of credibility.

First, there is a fundamental questioning of scientific ‘truths’. Who should define them, what methods should be used, what is the consensus on any given issue? Second, there is a crisis in the reporting of science. In short, are journalists still able to hold the powerful to account in this new media landscape? After the attempted sidelining of the Paris Accord on Climate Change, now is the time to take stock. A necessary first step is to consider the connections between public opinion, media reporting, and science policymaking – including gaps and feedback loops.

In the USA, “Americans are least confident in the news media, business leaders, and elected officials to act in the best interests of the public,” said a report from the Pew Research Center, October 2016. This survey of around 1500 US adults found just 27% had confidence in elected officials and barely 38% had confidence in the news media. Scientists, on the other hand, were trusted by 76% of respondents. Further south, the 2015 Latinobarómetro surveyed some 1000 adults in each of 18 countries. It found on average 33% trusted their national governments, while 44% trusted their national media. (No recent data was found for trust in professions across LAC).

Across the Atlantic, the 2014-15 Afrobarometer surveyed at least 1000 adults in each of 35 countries across Africa. It found on average that 48% of people trusted their national parliaments. Trust-in-media surveys were only available for the East African nations of Kenya and Uganda, which yielded 77% and 75% respectively. These figures were far higher than corresponding surveys in the US, UK and even the EU. (As for Latin America, no recent data was found for trust in professions across Africa.) 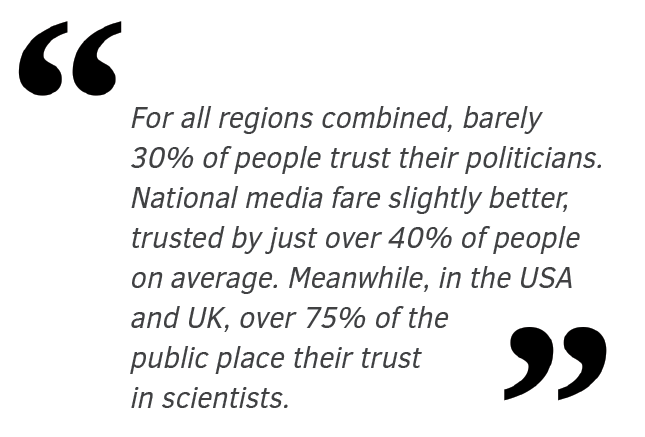 Results across Europe were roughly similar in 2016. Two Eurobarometer surveys of around 1000 people in each of the 28 EU Member States found just 28% on average trusted their national parliaments – but almost double that figure, 53%, trusted their national media. (No recent data was found for trust in professions across the EU.) In the UK, a 2016 Ipsos MORI poll of around 1000 adults found trust in politicians at the bottom of the scale: at just 21%, below government ministers at 22% and journalists at 25%. At the other end of the scale, scientists were trusted by 79% of respondents – showing even higher levels of trust than in the USA.

For all regions combined, barely 30% of people trust their politicians. National media fare slightly better, trusted by just over 40% of people on average. Meanwhile, in the USA and UK, over 75% of the public place their trust in scientists.

‘In every crisis, take the higher path…’

The implications are clear: this is mainly a political crisis of confidence, then a media problem, and last of all an issue for science per se. Yet, many crucial aspects of science, from funding to communications, are decided by policymakers and mediated by journalists, causing confusion and feedback loops in public opinion.

All parties suffer when a shared ecosystem becomes dysfunctional — especially when our caretakers, world leaders, make decisions based on emotions rather than evidence. Clearly, there is so much more to say and do on this particular challenge, which is why it has become a core theme in our global series of science reporting workshops.

A joint post by Howard Hudson and Diego Salama.