The secrets of immigrant student success

by UNU-MERIT
Canada, education, migration
Comments are off

Canada is consistently one of the top 10 destination countries for international migrants. More than 7.5 million foreign-born Canadians entered the country through the immigration process, according to 2016 Census data — representing more than one in five Canadians and more than one third of school-aged students.

Canada was also the first country in the world to adopt multiculturalism as an official policy. There are provisions within its Charter of Rights and Freedoms that protect the rights of minority groups. One might wonder — has Canada’s Multiculturalism Act had the desired effect of promoting positive outcomes for immigrants, particularly immigrant student groups?

One study, a large-scale review published in 2015, suggested that out of a group of 38 industrialised nations, Canada ranked first in the world for anti-discrimination policies for migrants. The same report also suggested Canada has favourable education policies in four key areas: Access, targeted needs, new opportunities and intercultural education for all. However, this report did not delve into education policies within specific provinces. Canada is rather unique in the Western world, in that it does not possess a federal department of education. Each province enacts its own education policy. 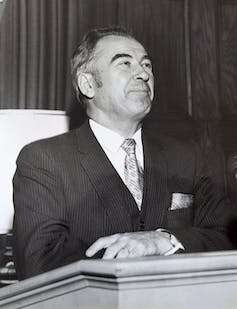 Senator Paul Yuzyk is seen in a copied photo. Yuzyk was a Canadian historian and Senator remembered as the ‘father of multiculturalism.’ (THE CANADIAN PRESS/Sean Kilpatrick)

Are there tangible examples that demonstrate the expression of ‘multicultural friendly’ education policies within provincial education systems?

Our own research, which has examined the relationship between provincial education policies and immigrant student achievement outcomes, suggests that the answer to this question is a resounding yes. Consider the largest province, Ontario, which provides policy guidelines to teachers regarding ‘Culturally Responsive Pedagogy’, ‘Antiracism and Ethnocultural Equity in School Boards’ and ‘Ontario’s Equity and Inclusive Education Strategy’.

Similarly, consider British Columbia, which developed a ‘Diversity in B.C. Schools’ framework to safeguard against discrimination, harassment and violence. Or Alberta, which provides a curriculum framework containing provisions for belonging and identity that underscore its efforts to promote diversity and inclusion in its multicultural and pluralistic society.

In which provinces do immigrant students thrive? Our research takes a longitudinal approach, which means we looked at student achievement outcomes over multiple years and based on various achievement tests. We have examined achievement results from the Organisation for Economic Cooperation and Development (OECD) Programme for International Student Assessment (PISA) — which is regularly used as a comparative measure of student achievement for 15-year-olds around the world in reading, mathematics and scientific literacy.

The most glaring results from PISA 2015 indicated that both first- and second-generation immigrants in British Columbia and Ontario outperformed their non-immigrant counterparts in science literacy — which was the major domain tested in the most recent survey. The available data suggested that other provinces such as Alberta, Saskatchewan, Nova Scotia and New Brunswick also displayed favourable results for first- or second-generation immigrant student groups when compared to their non-immigrant counterparts.

Collectively, Canadian findings are surprising — given that the vast majority of immigrant students around the world possess a significant performance disadvantage. Across OECD countries, this difference is approximately 33 points, which is equivalent to more than one year of formal schooling. It is worth noting that B.C. and Ontario have the highest proportion of first- and second-generation students within Canada, at 39.4 per cent and 37.1 per cent respectively — which suggests immigrant students can thrive in provinces with diverse student populations.

Of course, Canada’s strong performance may be partially attributed to its immigrant selection policies. For example, prospective immigrants receive points for job skills, education levels and proficiency in English or French — the two official languages. Overall, the Comprehensive Ranking System favours immigrants who are more likely to easily integrate into the Canadian economy.

Nevertheless, there are many instances around the world where immigrants who share the same cultural background and family characteristics do markedly better or worse in different national contexts. Research suggests that Canadian immigrants do particularly well even after controlling for the pronounced influence of socio-economic status.

In which schools do immigrants thrive?

Our research suggests that immigrant student outcomes are influenced by a complex array of factors and school system characteristics. For example, immigrants who are older than 12 tend to experience a “late arrival” penalty due to their language difficulties — underscoring the need for intensive language supports.

Lastly, immigrant students tend to perform well when they are provided appropriate school resources and accommodated, as much as possible, within mainstream educational settings — a result that underscores the importance of school inclusion practices.

Collectively, a broad scan of provincial education systems suggests a marked preference for culturally-sensitive integration approaches that preserve the cultural identities of diverse populations. This is in direct contrast to the assimilationist approach to immigration that existed in Canada before the 1960s.

In many respects, education policies tend to underscore a preference for fairly broad accommodations within provincial school systems. This approach is also reinforced by teacher education institutions across the country, which emphasise the importance of teaching practices (or pedagogy) and curricula that respect ethnic and cultural diversity.

Canada is best characterised as a culturally pluralistic society, in that minority groups are able to maintain their unique cultural identities and values within the dominant culture of non-immigrant Anglophones and Francophones. Although our non-immigrant population is fairly dispersed — particularly within Canadian urban centres — it would be naïve to suggest teachers’ pedagogical approaches are not geared towards this dominant group.

Indeed, the famous Russian cognitive psychologist Lev Vygotsky astutely noted almost 100 years ago that the practice of pedagogy has always adopted a particular social pattern in accordance with the dominant social class guiding its interests.

How teachers, school administrators and provincial education systems address the challenge of promoting culturally effective pedagogy, through the promotion of evidence-based policies and against the backdrop of international achievement standards — this remains a pressing challenge for our future.

This article was originally published on The Conversation.
Read the original article.