Smart robots are inevitable, the concentration of wealth is not

by Bart Verspagen
automation, economics, technological change
Comments are off

Artificial intelligence and machine learning are emerging technologies that many people are afraid of, including so-called ‘experts’ and policymakers. Perceived threats include the loss of millions of jobs, leading to mass unemployment and spiralling social and economic problems. One popular study by Frey and Osborne concludes that “47% of total US employment is in the high-risk category [above 70% risk], meaning that associated occupations are potentially automatable over some unspecified number of years, perhaps a decade or two”. In other words, around half of US jobs could be ‘taken over’ by robots within a generation.

This work has been followed up by an OECD study that estimates the automation probability of jobs in a wider sample of countries around the world. As they conclude that there is some variation between countries, the question therefore becomes: why the differences from one country to another? In a recent paper Neil Foster-McGregor, Önder Nomaler and I investigate how international trade affects the risk of automation across countries. Using information on the job structure of European countries, and applying the OECD estimation method, we calculate average risk of automation in various countries.

Trade has an impact on automation risk at the country level because it affects the national economic structure. Countries tend to specialise in sectors where they have a comparative advantage, and it happens that jobs in some sectors (like trade, transport and finance) have a much higher risk of automation than in other sectors (such as health, education and construction), simply because not all types of human labour are easily performed by smart technology. Put simply, if international trade pushes a country to specialise in many sectors with high (or low) automation risk, the country will tend to have a high (or low) average risk. 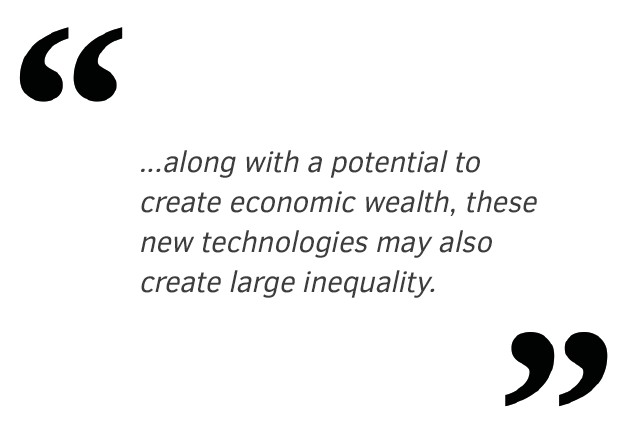 Perpetual growth: but for whom?

In a companion paper, Önder Nomaler and I investigate the implications of ‘smart robots’ (i.e., the combination of robotics, machine learning and artificial intelligence) for economic growth and the distribution of income. In a mathematical model of economic growth, we show that these technologies, when sufficiently developed, may lead us into a state of so-called perpetual growth. This represents a society in which economic wealth is growing, but without additional investments in new knowledge. The role of knowledge as a productivity enhancer, for example through Research and Development, is replaced by investment in smart robots. Installing more robots leads to an increasing wealth level, without human workers having to perform more work.

While the idea of perpetual growth admittedly ignores the problems of sustainability (e.g., climate change), it is a powerful metaphor for the economic potential of smart machines. In a world with dark and cold factories, smart robots can toil away while their human masters sit on beaches sipping cocktails. The model in our paper also shows, however, that with perpetual growth, the distribution of income becomes a real issue. Although human workers can keep working alongside smart robots, their relative wages will keep declining (i.e., compared to what the robots earn for their owners). Thus, along with a potential to create economic wealth, these new technologies may also create large inequality.

We also argue that it is very hard to re-distribute wealth from robot-owners to workers who solely depend on wages, because this will lower the incentive to invest in smart robots in the first place. Policies aimed at distributing the ownership of smart robots may be more effective in combatting the effects of smart robots on inequality. For this to happen, human workers must save part of their income and invest it in robot capital. This could be facilitated regulation and collective investment, much like pension systems work in a country such as the Netherlands.

The transition towards an economy in which smart robots have deeply transformed the workplace may well be on its way, already leading to a declining share of wages in total income. But our analysis suggests that this may take place at different speeds between countries, interwoven as it is with the process of globalisation (trade). But even if it goes at different speeds, this technological revolution will eventually have deep and lasting effects across the globe. Our thinking about globalisation and its economic and social effects must therefore be developed to include the technologies of smart robots as a topic for policy development. Put simply, we need to discuss possible regulations now – before the robot-owners take over.