Political empowerment of women in Africa: Influence or number?

by UNU-MERIT
Africa, gender, policymaking
Comments are off

In recent decades women’s political representation has significantly increased in Africa. From 2000 to 2018, the proportion of women parliamentarians almost doubled, and women’s representation in cabinet increased fivefold to 22% between 1980 and 2015. Unfortunately, the numbers do not necessarily imply influence.

Women’s political representation in Africa is more descriptive than substantive. Women represent almost half of the population in Africa, and yet they are the least likely to hold political positions and exercise authority across the continent. Often, female politicians in Africa overcome many barriers and constraints to access political positions. But once there, many of them have little decision-making power or are excluded from important government decisions on legislation, policies and budget allocation.

In this article we discuss the level of influence female politicians in Africa hold, and explore how beyond representation, female politicians’ access to political influence and leadership in social institutions reduces gender discrimination with respect to the rights of women in the family code, physical integrity, access to financial resources, and civil rights.

Systemic gender bias against female leadership, entrenched in socio-cultural and religious values, still persists in Africa. Rwanda, for instance, may have the highest proportion of women representation in parliament (61.3%) and South Africa may have the highest percentage of female ministers (44.7%) but can we say these numbers translate to actual influence?

Women’s representation in political parties, the legislative and executive arms of government, and at points of crisis matter, but what matters most is how these numbers translate into improving policy content and direction. Comparing women’s cabinet appointments to the percentage of budget managed, on average women with cabinet positions manage a relatively low proportion (18.9%) of budgets. This is evidence that strides made in increasing the number of women in politics in Africa is at best only symbolic and at worst, redundant. 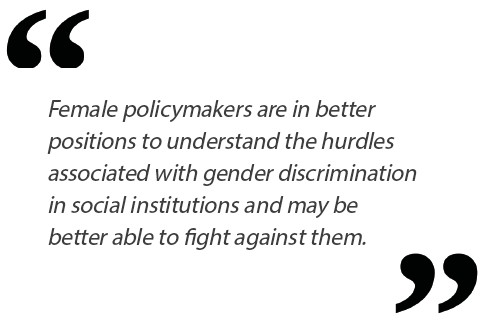 When female policymakers have influence, they positively impact the lives and well-being of women, girls, and society in general. One important factor that restricts the rights of women in parts of Africa is the entrenched nature of gender discrimination in social institutions. By social institutions we mean norms, traditions and codes of conduct that are rooted in culture, religion and customs. These institutions can be long-lasting and difficult to remove, yet it is their removal that will create more egalitarian societies in which women may have the freedom and resources to reach their full potential.

The second index is the Social Institutions and Gender Index (SIGI) taken from the OECD Gender, Institutions and Development Database. The index measures the extent to which women are discriminated against in terms of social institutions and norms. This index is an aggregate of these four sub-indexes: gender discrimination in the family code, restricted physical integrity, civil rights, and access to financial resources.

Figure 1: The Effects of Female Leadership on Gender Discrimination in Social Institutions 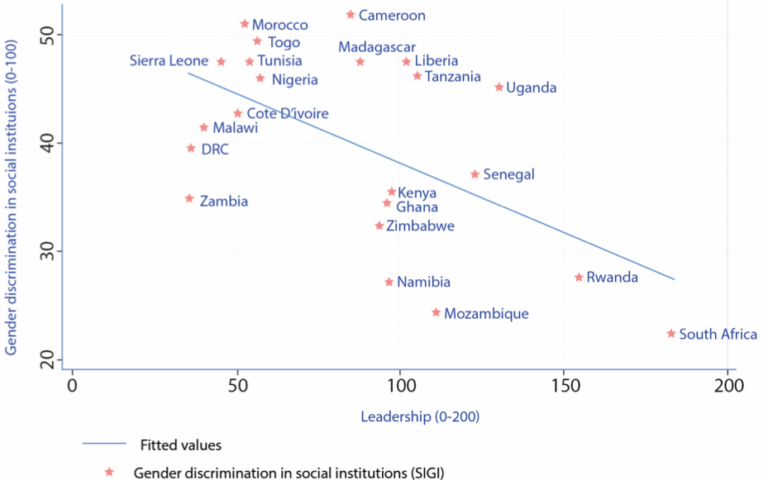 Figure 2 shows the relationship between female political leadership and gender discrimination in the family code, physical integrity, civil liberties and access to finance. The graphs highlight that when women have more political influence, there is less discrimination in the family code, and women and girls are less restricted in terms of physical integrity. Similarly, when there is more political influence for women, it decreases restricted civil rights and enhances access to assets and financial services. 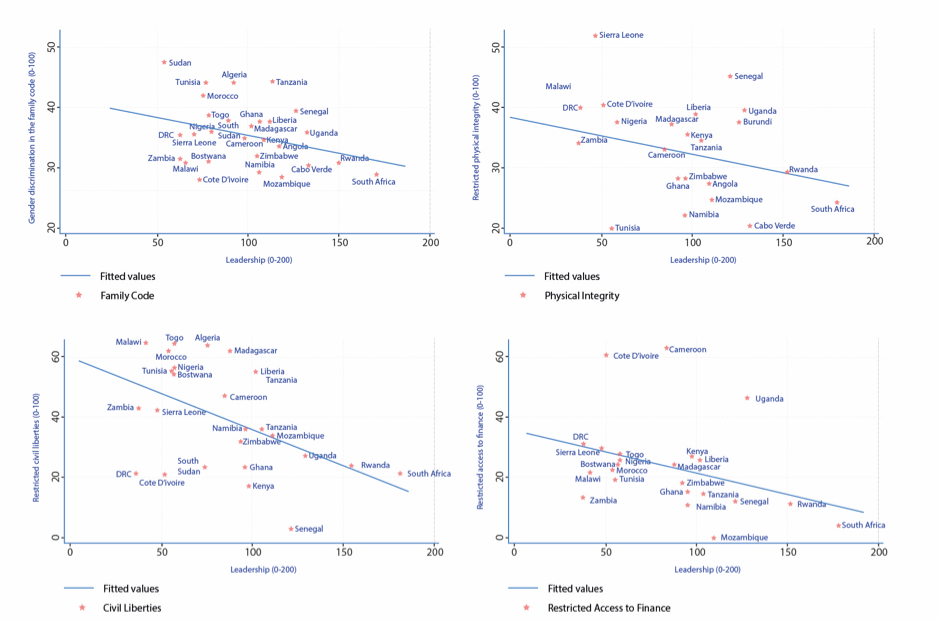 The Sustainable Development Goal 5 (SDG 5) calls for gender equality and full empowerment of women and girls by 2030. One of its targets is the political empowerment of women. Facts show that whereas political representation continues to increase in Africa, equal representation is not achieved in most African countries. When women overcome hurdles and gain political seats, they hardly lead the most important political positions. Most striking, they get little influence and decision-making power in legislation and budgets. Countries would benefit enormously from increasing the influence and decision-making power of female politicians. We have shown in this article that giving more influence to female policymakers would help many African countries become more egalitarian and fair toward women and girls. Increased women’s political representation may help in the success of the SDGs, but only when representation comes with actual influence and leadership.

This article is republished from Impakter. Read the original article.