by UNU-MERIT
alumni, awards, urban sustainability
Comments are off 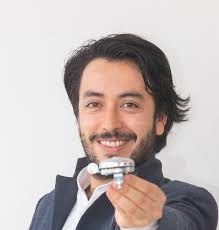 Affiliated researcher and PhD alumnus Dr Carlos Cadena Gaitán has been named one of the ‘21 Heroes of 2021’ by the Transformative Urban Mobility Initiative, a global forum co-sponsored by UN-Habitat.

Early in the pandemic, while working as Transport Secretary of Medellín in Colombia, Carlos took a leading role in distributing Personal Protective Equipment to the city’s residents, while personally fighting the virus on public transport with disinfectant sprays.

But coronavirus was not the only killer on the streets of Medellín. Road deaths killed 10 out of every 100,000 inhabitants, so he set out to implement the Vision Zero approach to the city’s 2020-2023 Development Plan to reduce deaths by initiating – inter alia – a complete transformation of the most dangerous avenue in the city: the ‘Northern Highway’.

He also fought off carbon emissions by introducing pop-up bike lanes during the first months of the pandemic, which led to a massive 300% increase in female cyclists compared to the previous year. Carlos said:

This helped women riders in particular because we actually used the main roads, and the well-maintained roads – as opposed to previous attempts that used secondary roads with low lighting, dangerous blind spots, longer routes, and sometimes pedestrian pathways. Inspired by Dutch theory and practice, it’s about doing the right thing for those who need it the most. It’s about taking the right technical approach, even though it may not be popular in the short term.

The award was made by the Transformative Urban Mobility Initiative, a global forum made up of 11 prestigious partners including the Asian Development Bank, the German Development Agency, and UN-Habitat. Innovation, knowledge and investment are the three pillars of this global initiative, as it directly supports innovative pilot projects worldwide; as it shares mobility knowledge via workshops and conferences; and as it invests in constructing and modernising sustainable urban infrastructure.