Mygration Story: From coast to host across the Mediterranean

by Clara Alberola
Africa, Europe, migration
Comments are off 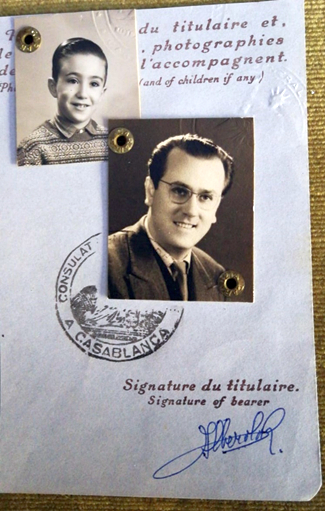 My surname is Alberola. Like many Spanish surnames, it most likely has its origins in Al-Andalus (711-1492 AC), as the Spanish Peninsula was conquered by the Umayyad Caliphate, which had spread all the way from the Middle East to Portugal. Undeniably, the long-lasting Cordoba Caliphate left an important trace on Spanish language, architecture, music and literature.

Fast forward to the late 1940s, when my grandparents on my father’s side, Rene Alberola and Jeanine Baurin, fell in love in Oran (Algeria). At that time, Algeria had been a French colony since 1830 and was even considered one of France’s integral regions (or ‘départements’). Rene’s grandparents had fled drought and poverty around Alicante (Spain) in the 1880s to work as labourers in the thriving French colony of Algeria. Jeanine’s family, on the other hand, had come from France as part of its military installations across Algeria. As they would often recall over long family dinners, Oran was a very multi-cultural city in which Spaniards, French and Italian settlers had formed the ‘pieds-noirs’ community, which also incorporated elements of Algerian culture and gastronomy. Although my grandma was a relatively pious Catholic, Friday’s menu was always a huge couscous.  Oran at the time was often referred to as a great melting pot. It is important to note, however, that indigenous Algerians were considered second-class citizens. 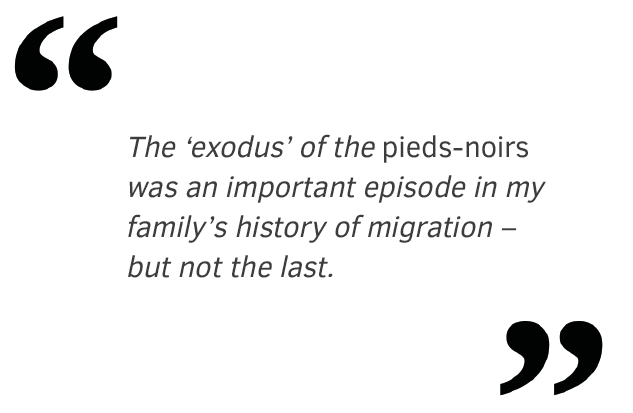 In 1954, violence escalated between the Algerian independence movement (FLN) and the French authorities. The Algeria War had begun. While my grandfather on my mom’s side (a farmer from Northern France) was forced to join a military posting in the Algerian desert to fight ‘the Arabs’, my grandfather on my dad’s side was trying to convince his stubborn brother that it was really time to leave the country. In 1962, they boarded a ferry to France, although they had never set foot in France before and did not wish to leave Oran. That summer, Algeria’s independence was proclaimed – prompting almost a million returnees to sail for the French ports of Ajaccio, Toulon and Marseille, among others. Images of boats packed with thousands of olive-skinned people coming towards metropolitan France flooded the French newspapers. Sound familiar? Their strange accents and Friday couscous tradition did not blend well in a France not yet accustomed to migration and diversity.

While returnees thought the metropolitan French would receive them with open arms, many were shocked at the harsh welcome they received and the difficulties of integration. They felt strangers in their native Algeria, strangers in France, and betrayed by President Charles de Gaulle. My great-grandmother died soon after the repatriation; her biggest regret was that she would never be able to return ‘home’.

The Algerian War and the pieds-noirs are still very sensitive questions in France. While the extreme right wing party ‘Front National’ occasionally makes claims about the restitution of ‘French Algeria’, President Emmanuel Macron recently admitted that the French Army had used torture during the war. For the first time, he opened the state’s archives on the Algerian War.  In 2018, there is still some way to go in France’s efforts to recognise the debts of its colonial past.

The ‘exodus’ of the pieds-noirs was an important episode in my family’s history of migration – but not the last. Feeling curious about his Spanish roots, my father moved from France to Spain in the 1980s to study Spanish literature where he and my mother (also French) met in the blossoming city of Madrid. After a few years back in France, they started a family and settled in Barcelona in the late 1990s, as if to close the loop of migration from Spain.

And here I am; somewhat-French, somewhat-Spanish, a local of Barcelona and now a little from Maastricht. In a globalised Europe, the fact of not being totally French and not being totally Spanish has always been more an advantage than otherwise. My job as well as my scattered network of friends have prompted me to travel to more than 15 countries – in 2018 alone. As many people in my generation, I am lucky to be super-mobile. It’s been just over two years since I moved to Maastricht and who knows where I will settle in the coming years? Ideally somewhere, anywhere, on the Mediterranean coast.

About the Author
Clara Alberola is a research officer for the Migration Research Group at UNU-MERIT. Since she joined the research team in October 2017, she has provided assistance to several migration-themed research projects for institutions such as IOM, ICMPD and GIZ. Her research interests lie in the field of migration and gender mainstreaming.
Share this page