by Soha Youssef
migration, MPP, UNHCR
Comments are off

In many parts of the world free-will and decision-making are not considered natural rights for women. I was born and raised in one such country, where women have to negotiate or fight against man-made laws on a daily basis. When I use the term “man-made laws” I refer not only to the legal system but also the culture, which is inherently restrictive towards females.

I grew up in an environment where women are constantly constrained from making their own decisions. When you exercise this natural right as a woman, it is considered taboo – challenging all of society. From a young age this was something I struggled against, both in my cultural and family environment.

My parents were constantly worried about me because of my ambitions and resulting decisions. At the age of 18 my desire to pursue a work opportunity in Kolkata was met with great resistance. It took the intervention and explanation of my brother for my family to understand how important this would be for my future. I was taking a decision to shape the woman that I wanted to be, deciding on my future. My choice to go to India was one that would change my life, but it was not the last time that I would have to face similar cultural obstacles.

During my first year of college, I was often asked when I was going to get married. No one cared about my academic ambitions or my personal development, simply because “being alone” is seen as strange in my country. At a certain point I did succumb to these pressures, but I soon realised that this was not the life that I had planned. I wanted to be respected for what I did and whom I chose to be – and marriage back then would not have helped.

Shortly after graduation I began working for UNHCR, an experience which greatly impacted my perception of the world around me, and my plans for the future. I met women who had survived wars, crimes against humanity, sexual violence and countless other atrocities, yet who still held on to life; they wanted to prove that they were worthy of a dignified life. Meeting and working with these women every day for three years reminded me that I could do more for myself. These encounters reminded me that every woman has the right to make her own decisions without having to worry about society’s approval. Of course this was easier to say for someone who had not experienced everything these women went through, but in my own way I did challenge my society.

I was never ready for marriage while working in Egypt. I always wanted to focus on my professional and academic life, specifically by pursuing a Master’s degree. But I was surrounded by people who did not believe this to be necessary, and that maintaining my career along with a stable married life, was the best possible course. What does “stability” mean, though? To me, these suggestions had the opposite effect: denting my confidence and making me question my purpose in life. Eventually I made the difficult decision to resign from my job (yet another choice that attracted criticism). But for me, stability in my own life meant pursuing my personal and human development.

Mastering myself via Maastricht 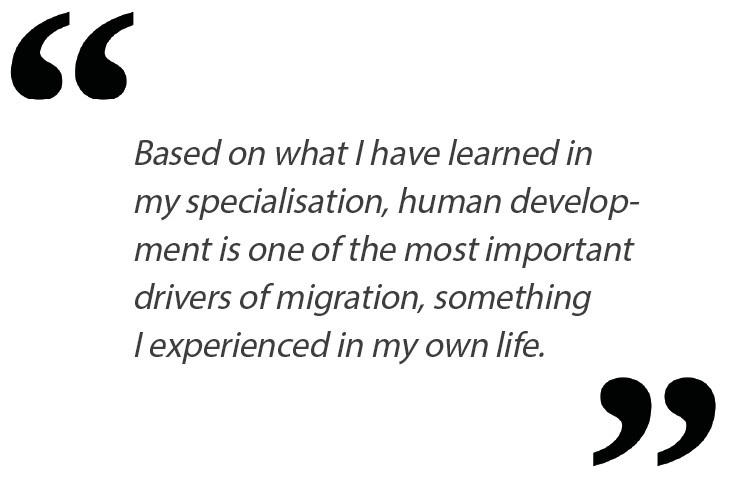 When I was accepted on the Master’s programme at UNU-MERIT, convincing my family was yet another major challenge. My family always believed in me, but societal factors of who a woman should be, and how she should live her life represented a great obstacle. Eventually, after quite some trouble, I won their blessing to move to Maastricht. But it was worth the trouble because I found exactly what I was looking for: real personal development.

I’ve learned so much, not only from the Master’s programme, but also from living in a foreign country. My decision gave me priceless experiences and taught me about myself. I realised that I am capable of being independent and happy, with or without marriage. That I am capable of taking care of myself. Most importantly I experienced for the first time being the sole master of my life. Being my own decision-maker is now a privilege I relish even more, because I know there are women around the world who are suffering in far worse situations than I ever was.

My choice to specialise in migration studies has helped me to make sense of everything I have learned throughout my life. I began to understand on a deeper level why I wanted to come to Maastricht, why I wanted to get my Master’s degree, and why I want to continue living in the Netherlands. Based on what I have learned in my specialisation, human development is one of the most important drivers of migration, something I experienced in my own life. Human development for me was not only the educational component, but a mix of different aspects of life that helped me to achieve a version of my true self that I accept and appreciate.

After graduating from the Master’s programme, I was hired by the migration research team at UNU-MERIT, a step which I thought would be another obstacle. Convincing my family that I was going to stay in the Netherlands, despite finishing my Master’s studies, would not be easy. However, this time things were different. My mother told me: “All I want for you now is to be happy. Do what you think is right”. This was a life-changing moment for me. My experiences in the Netherlands have not only changed me, but have given me the tools to overcome obstacles – ones that I previously had to fight.

I learned about many aspects of migration and I understood that what I was experiencing was “in-kind remittances”. The fact that I was given the opportunity to develop myself and had people who believed in me made me want to become the best version of myself. This was and continues to be a life-altering experience, because although I have not always known exactly what I wanted to do with my life, I never doubted the woman I wanted to be. I came to the Netherlands, not necessarily looking for a positive experience. Rather, it helped me process the negative experiences of my past, and led me to a life beyond my dreams.

About the Author
Soha Youssef is a researcher within the Migration Group at UNU-MERIT. She holds a MSc in Public Policy and Human Development from Maastricht University / UNU-MERIT, with a specialisation in Migration Studies. Soha previously worked at the UNHCR office in Cairo, where she mainly processed asylum applications for East African and Iraqi asylum seekers in Egypt.
Share this page