Dissecting our work on the web: Busting myths & tracking impact through data

by Howard Hudson
communications, data, research
Comments are off

Diversity, visibility and impact are three of the biggest buzzwords of the media landscape, especially for the UN family. They feed into various questions, including: Who is shown and who is seen? Who should set the spotlight? What is shared and what is gained? So on and so forth. This post aims to explode a few myths by drilling down the data while explaining our basic approach. 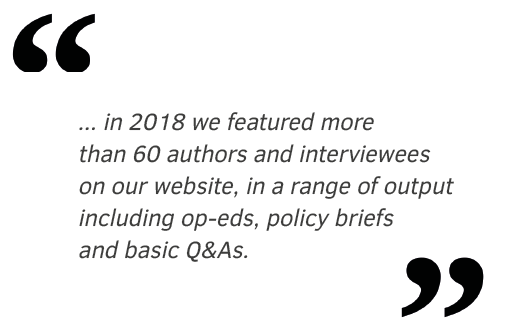 Here at UNU-MERIT we have two big advantages for communications. First, as a UN institute, diversity is in our DNA, with colleagues coming from all around the world; and second, academic freedom is written into our UNU Charter. That means we can weigh in on any divisive issue, including the conflict in Ukraine, and we are able to do so from both ‘mainstream’ and more ‘controversial’ angles. In other words, we can be creative in our analyses, robust in our debates and not feel bound by political dogmas.

Another way to ensure diversity is to share the stage equally – in fact a major part of our job here is to prize open those ivory towers and to shine a spotlight on all our researchers. But how exactly do you measure success in presenting diversity? The simple answer is to quantify, assess and bust the myths that go around – i.e. assumptions like, “You only speak to the usual suspects!”

The charts above show that in 2018 we featured more than 60 authors and interviewees on our website, in a range of output including op-eds, policy briefs and basic Q&As. Coverage is relatively balanced with only two standout ‘chunks’: one at 7.6% by the main institutional editor (Howard Hudson), and another at 5.4% for a series on social protection (Alex Hunns and co.) – which, incidentally, was reposted by UNDP after a successful pitch. Also note the many diverse surnames, hailing from Canada, Germany, Greece, India, Japan, the Netherlands, Russia, UK, USA, etc.

Drilling further down, what do we mean by visibility? Take the following three examples drawn from our website analytics. First off, a simple announcement for the ‘EU Innovation Scoreboard 2018’ brought over 1000 hits, partly thanks to a press conference with EU commissioners followed by social media shares by EU and UN partners. Collectively this ensured more than 100 views per day in the first week or so after the announcement. Additionally, because this work is fundamental to our institute, we featured it as a ‘box’ on our homepage – a box that ensured a low-level stream of attention for many weeks after the announcement.

Second, an op-ed on ‘Families’ migration nightmares: Eritreans en route to Europe’ garnered almost 2000 hits, partly because it was shared widely on social media for World Refugee Day, 20 June 2018. This brought a spike of roughly 100 views per day, before dropping back until mid-November, when the article suddenly rose from the dead – to above 300 views per day – thanks to a couple of high-profile events that featured the author.

Third and finally, we move from basic communications to programme marketing. ‘A good place to bridge the gap between research and policy’ — EPRM 2018 drew almost 4000 hits, partly thanks to Facebook advertising. Just 20 euros, combined with targeting by city and keyword, pushed a basic Q&A with the course coordinator on to the news feeds of roughly 20,000 people. The conversion rate was not particularly high (more on that another time), but it was enough to boost the virality to a few hundred views per day for almost a week – and to make it our most viewed post of 2018.

What are the takeaways, then? First, we should cherish our diversity and make the most of our academic freedom — but in doing so, we may have to encourage some talented yet reticent colleagues to shift out of their silos. For those of us working in communications, this also means connecting with wider political networks, while pitching to the right channels at the right times: for example, ahead of ‘UN Days’ and other international observances. It also means exploiting social media, even investing in micro-payments where appropriate and necessary.

Finally, communicators need to amplify real-world expertise — because spin for its own sake is pointless. The aim is not to appear fleetingly in front of a million eyeballs but to influence government policies and shift collective mindsets. At a time when experts and evidence are increasingly sidelined in politics and media, getting traction on the road to this real ‘impact’, is at the heart of all our science reporting work at UNU-MERIT. I’ll expand on that in my next post.

This post was updated on 8 February 2019, e.g. noting the many diverse backgrounds of staff and fellows.