by Katie Kuschminder
Africa, Europe, migration
Comments are off

The number of families migrating via the central Mediterranean, the world’s most dangerous migration route, is actually quite low. In 2017, 74% of arrivals in Italy were men, 11% women and 15% children; a striking 91% of children arriving were unaccompanied. There are several reasons why so few families arrive together in Italy.

In this post I will focus on examining one particular country of origin group: Eritreans. Most Eritreans are granted refugee status upon arrival in Europe and were one of the few nationalities eligible for the EU Relocation programme (having reached the threshold of more than 75% first asylum acceptance rate across the EU).

Eritreans have been a major arrival group in Italy over the past five years. In 2017, the flow of Eritreans was relatively small at 7,052 arrivals as compared to 2016 with 20,718 arrivals, and 2015 with 39,385 Eritrean arrivals. In 2017, I interviewed recent Eritrean arrivals in Italy in Milan and Rome. In total I conducted 36 interviews, of which 19 were with Eritrean families. Families were not necessarily an entire unit of a husband, wife and children, but in this case, I considered families as husbands and wives, or a parent with a child or children.

Eritreans flee their country for multiple reasons including an oppressive military regime, forced conscription, poverty, and a lack of future opportunities or freedom. Leaving without a valid exit permit is against the law and Eritrean soldiers have been ordered to ‘shoot on sight’. Exiting is thus quite dangerous. The first countries of destination are either Ethiopia or Sudan. Increasingly poor and deteriorating conditions in both Ethiopia and Sudan propel Eritreans onwards with the hopes of reaching Europe, safety, and a chance at a ‘life of freedom’.

In the first stage of the journey when leaving Eritrea, husbands and wives often do not leave together as this is too dangerous. Most commonly, they leave separately and frequently from separate locations, particularly if the man is in the military or avoiding conscription. If the family already has children, key decisions are made at this time to take or leave the children.

One woman I interviewed was leaving because her husband had already the left the country and she was now being harassed by the government and did not feel safe. She had three children and had to make a difficult decision whether to leave them or take them with her. She left the older two children with family members and took the youngest child that was still an age she could carry with her. She felt it was too unsafe to take the other children and that she would not be able to protect all three of them on the journey. 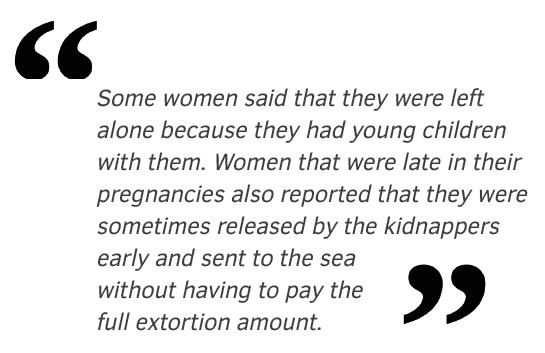 After leaving Eritrea and when deciding to make the journey to Italy via Libya, critical decisions are made in how to approach this. First, Eritreans are highly aware that they will almost certainly be kidnapped and detained in Libya and they will only be released when they have paid an amount demanded by their kidnappers. For families, if they enter Libya together the price is then of course higher. This places greater strain on their extended families and transnational connections to pay a high sum all at once. If they migrate separately at different times (such as six months or one year apart) this allows the family more time to put together the second sum of money. One person, sometimes the woman and sometimes the man, often stay behind in Sudan to wait until the spouse has crossed safely and money can be prepared for the second journey.

Second, families and couples are also aware of the high prevalence of abuse in Libya and en route. Rape and gender-based violence are common. It is known within the community that if a man stands up to protest his wife being taken by the kidnappers that the man is at risk of being killed. One respondent described the situation as follows: “The smugglers choose a girl they like and make her stay for about a year and they let her go whenever they want and choose another girl for the next year. You cannot imagine the feeling we had when we saw this, especially their husbands and brothers. You cannot even stop them because they immediately kill you if you try to stop them.” Being aware of these risks, families often stated that it was too dangerous to migrate together.

Third, children most commonly migrate with their mothers, especially young children. Some women said that they were left alone because they had young children with them. Women that were late in their pregnancies also reported that they were sometimes released by the kidnappers early and sent to the sea without having to pay the full extortion amount. However, other women reported being hit or the children being beaten in Libya.

The risks for Eritreans in migrating to Europe are extreme and families are aware of the risks. Unlike in other contexts where families feel that they are safer migrating together, for Eritreans it is understandable that migrating separately is most common. None of the families that I met migrated together as husband, wife and children. There was always a fracture made within the family to reduce the migration risk. Families work to reunify themselves in Italy upon arrival or further afield in Europe depending on the duration of separation. 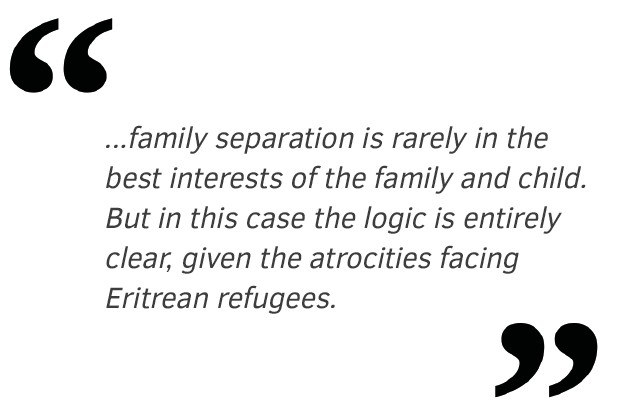 On World Refugee Day it is important to consider the great lengths that families are facing to find safety and security. It is well-known that family separation is rarely in the best interests of the family and child. But in this case the logic is entirely clear, given the atrocities facing Eritrean refugees. Eritreans make the decision to put their families at risk to come to Europe because they feel there are no options for staying in Ethiopia, Sudan, or Eritrea. Policies such as the Italy-Libya deal and the current events of the Italian right-wing League party leader Matteo Salvini refusing to let the Aquarius dock in Italy are huge protection concerns.

Expanding refugee protection is clearly a challenge, but the atrocities experienced by refugees en route to places of protection cannot be overlooked.  Increasing opportunities for resettlement and innovative policies such as the humanitarian corridors pilot programme in Italy can help cut the risks of seeking refuge. Yet these programmes are far too small in terms of the number of beneficiaries. To save refugee families from their nightmarish journeys, there are two main options: drastically improving conditions in nearby host countries or convincing the global community to accept and resettle many more refugees.