by UNU-MERIT
alumni, economics, global health
Comments are off

A post by Mantej Pardesi, alumnus of our Master’s programme in Public Policy and Human Development (MPP).

The novel coronavirus has put an emergency brake on the express train of our global economy. This single-celled micro-organism has grounded fleets of jumbo jets, crashed stock markets, stopped production in industrial factories and suffocated the economy. In so doing it has uncovered alarming fault lines in the world of work.

Many people in the knowledge economy are able to work from home, as directed by numerous governments worldwide. But there is no such ‘luxury’ for taxi drivers, factory and restaurant employees and other informal workers who are disproportionately affected by the emergency brake. At least 60% of the world’s employed population is engaged in informal work – people who depend on day-to-day earnings, people who will struggle to survive if they miss out on a day’s work, people who more often than not lack the safety net of an employment contract or union representation. The situation is further compounded at home, where millions of workers in India, South Africa, Zimbabwe and Thailand, for example, face dire health and safety risks, living in cramped housing with inadequate water supplies to wash their hands.

What will be the impact on workers? Conventional economics would argue about the supply side and demand side factors. Despite the ruthless race for capital accumulation in the 21st century, labour remains at the centre of production processes. When the workforce is restricted, production is affected, which in turn impacts global supply chains. This is why public health measures, though necessary, cost the economy a lot. In the short run, you have empty factories; in the long run, you have empty factories with bankrupt owners. (Even Tesla’s dream of a fully automated production cycle is at best impractical, unlikely to be realised until several years down the line.) When factories cannot produce and sell cars, owners cannot pay workers. They in turn cannot spend, which depletes demand and the economy in general. This stylised course of events continues until lockdown measures are lifted, or the government intervenes and provides a fiscal stimulus.

These are the fault lines that are ripping up our labour markets. Highly skilled service sector employees can usually adapt to working from home, but medium and low skilled workers (including those hired informally, working part-time or in the ‘gig economy’) cannot. Without unemployment benefits and/or income support, the suffering is palpable. For this section of the population, every day in lockdown is a dual fight against hunger and an invisible virus. Covid-19 will likely widen the gap between the rich and the poor working class. The fault lines risk becoming a tectonic shift, stretching beyond the world of work. 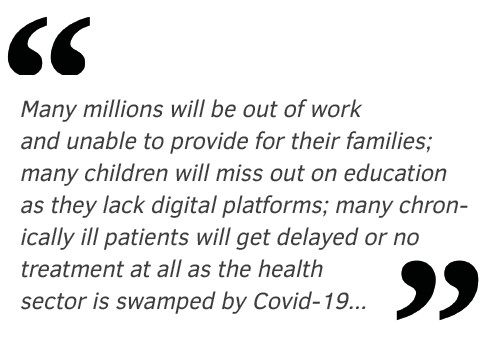 A recession is inevitable, a depression probable, but how will countries and continents be affected by this pandemic? Back in December 2019, at the time of the outbreak, the global economy was weak but stabilising, the budding trade war between China and USA was proving relatively harmless, while growth in the Euro Area was steady at just above 1% per annum. However, the situation was already precarious in other parts of the world. Venezuela was suffering the effects of hyperinflation and mass violence, a plague of locusts was destroying swathes of cropland in East Africa, while the civil war in Syria dragged on into its tenth year. Meanwhile in India, a country of 1.3 billion people, a three-week lockdown was imposed with four hours’ notice. What will likely follow there? Many millions will be out of work and unable to provide for their families; many children will miss out on education as they lack digital platforms; many chronically ill patients will get delayed or no treatment at all as the health sector is swamped by Covid-19; all while the police and army struggle (often brutally) to maintain law and order.

Today, Europe and the USA are the epicentres of the global pandemic. There is suffering, there is loss of life and a recession on the horizon. Soon, though, worse will be seen in poorer countries across Latin America, Africa and Asia – not because of the virus itself but because so many of their economies and societies are far more stretched and vulnerable. The fault lines are already apparent; whether they widen and break is now a critical question for global public policy.