‘Black Voices Matter’ #2: What have the protests achieved and should they always be non-violent?

by Ayokunu Adedokun
Africa, Americas, human rights
Comments are off 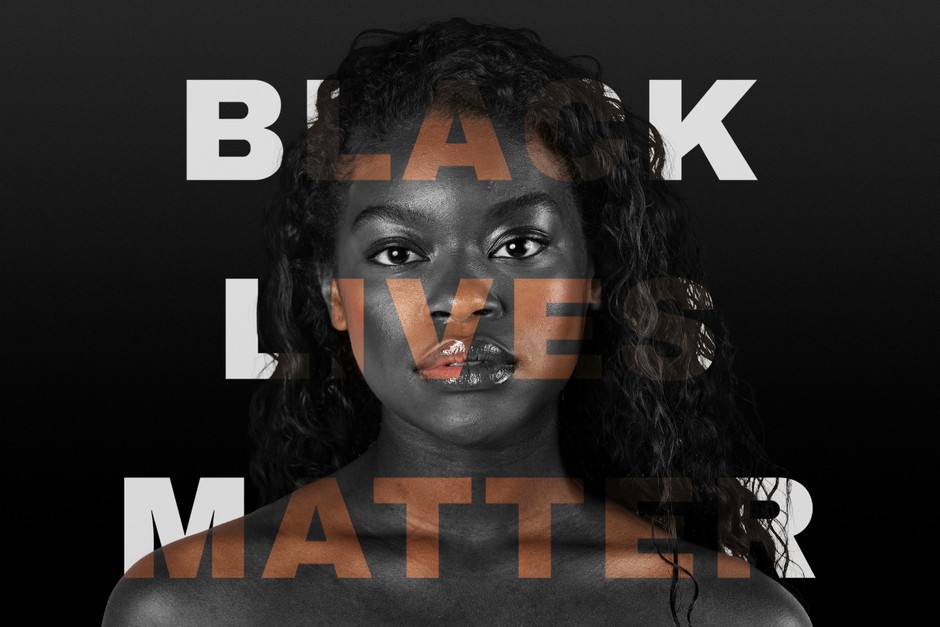 Inspired by the ‘Black Lives Matter’ movement, this new series is the product of an international team from UNU-MERIT that first came together in the summer of 2020. It aims to provide a substantial and accessible platform in the fight against racism, articulated by young African thought-leaders who put a premium on robust debate and other non-violent approaches. #blacklivesmatter #whiteforblack

This is an extraordinary moment in world history. While it is too early to assess the global impact of the Black Lives Matter movement, emerging evidence indicates that it has made significant progress. The first significant impact of the protests has been the toppling of Confederate and slavery-related statues around the world — statues that had stood all-too-proudly for centuries. In England, protesters toppled the statue of Edward Colston, a prominent slave trader. In Belgium, protesters set fire to a statue of King Leopold II. In the USA, statues of George Washington, Thomas Jefferson and Abraham Lincoln have been toppled. Airports and schools are also being renamed.

Second, city councillors have vowed to reform police departments. From Minneapolis to New York City, and from Los Angeles to Denver,  mayors have pledged to take money away from the police and reinvest it in community programmes. In Los Angeles, for example,  Mayor Eric Garcetti announced that he would redirect US$250 million from the police budget into healthcare, jobs and ‘healing’ programmes for the city’s communities of colour. Democrats in Congress have also unveiled sweeping legislation on police reform, including banning chokeholds and mandating federal police officers to use body and dashboard cameras.

Third, corporations such as Apple, Facebook, Google, Reddit and Amazon have promised greater diversity and inclusivity. In fact, Reddit co-founder, Alexis Ohanian recently resigned via a video urging the board to fill his seat with a black candidate. Ohanian also pledged US$1 million to Colin Kaepernick’s Know your Rights Camp in the announcement. On top of this, a new database has been set up to collect video footage that documents police violence at demonstrations across the country.

While it is undeniable that the Black Lives Matter movement has contributed immensely to bringing the long-standing issues of structural and systemic racism that exist to the forefront of today’s global discussions, emerging evidence suggests that the movement is also creating division. For example, the ideas by some Black Lives Matter supporters, such as reparation programmes, defunding of the police, and violent protests – while they might be historically justifiable – are neither beneficial to the black community in the long-term nor sustainable to achieve racial equality. In fact, the arguments to defund the police and periodic violent protests would only make the lives of black people worse off than they already are.

Another increasing trend among the supporters of the Black Lives Matter movement is that they easily shut down any opponents simply by labelling them ‘racist’. A more challenging trend among the movement’s supporters in academia is the pressure from both students and faculty to decolonise the curriculum. Some students even demand to be taught by only professors of colour. While the intentions behind these demands are laudable, they appear counter-productive. As Mahatma Gandhi, Martin Luther King Jr. and Nelson Mandela demonstrated, peace and justice ultimately come through mutual respect, dialogue and shared solutions, not by fomenting further division.

What route to racial progress?

Over the past decade, a large body of academic research and public policies have accumulated on the topic of racial equality without a clear consensus. Some studies argue that racial equality can only be achieved  through legal remedies such as desegregation and affirmative action.  Many critical race theorists and other social scientists have recommended ‘interest convergence’, or the notion that progress toward racial equality will only be made when it converges with the interests of white counterparts. Conversely, a few studies assert that market-based reforms are more important to achieve racial progress.

Meanwhile, a small but growing body of academic and policy studies asserts that a strong reparations programme (a system of redress for egregious historical injustices) would accelerate economic growth and kickstart a new era of public discussion around racial equality and anti-racist policies. While these efforts and proposals have contributed to reducing racial disparities in wealth, income, education, health, sentencing and incarceration, they have not significantly disrupted racial inequities. That is because they fail to address the systemic and structurally embedded nature of racism.  Historical legacies are the main reason that numerous civic, social and economic institutions continue to affect black people globally in deeply unequal ways, even though these institutions appear to be race-neutral on the surface.

Ultimately, there’s no one-size-fits-all approach to racial equality. We need multi-pronged strategies that include non-violence, criminal justice reform, education, economic opportunities, as well as allyship and partnerships. I will discuss non-violence in this post. Future posts will unpack the other strategies suggested.

The power of non-violence 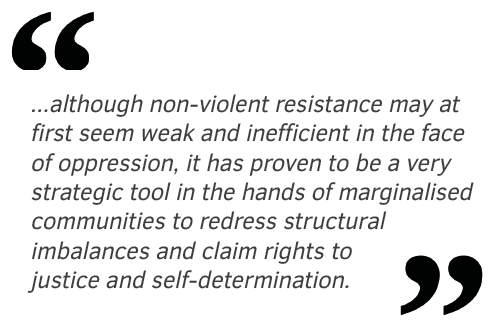 While the Black Lives Matter protests have been largely peaceful, violent protests seem to be on the rise. The USA faces a bigger risk of political violence and instability, especially in the context of the 2020 elections. If violence continues, the legitimacy and global support that the movement has already enjoyed could be diminished. In fact, a new Pew Research Center survey already shows that public support for the Black Lives Matter movement has declined, especially among white and Hispanic adults. The partisan divide in support for the Black Lives Matter movement has also widened even more between Democrats and Republicans. Yet, recent research shows that non-violent civil resistance is far more successful in creating broad-based change than violent protests. Put simply, violence can scare away potential allies.

The principle of non-violence rejects the use of physical violence in order to achieve social or political change. Whether under slavery, colonialism, communism, or totalitarian dictatorships, non-violent civil disobedience was used throughout the 20th century as a means of projecting immense political power and to achieve social justice. This approach was employed to achieve independence in India and South Africa, establish equal rights in the USA in the 1960s and to create new democracies in Tunisia and Egypt. One of the most famous global leaders of non-violent resistance was Mahatma Gandhi who opposed British imperial rule in India during the first half of the 20th century. Gandhi took the religious principle of ahimsa (do no harm) common to Buddhism, Hinduism and Jainism, and turned it into a non-violent tool for mass action. He led nationwide peaceful movements and campaigns for the eradication of poverty, expanding women’s rights, and ending ‘untouchability’ and establishing Swaraj (self-rule). His tactic of non-violence helped to end British rule in India and influenced modern civil disobedience movements across the globe.

At the heart of the US Civil Rights Movement in the 1950s and 1960s was the use of non-violent direct action protests. Martin Luther King Jr, in particular, used non-violent civil disobedience to fight the US segregation policy against blacks. He proposed equality of both the races and used peaceful marches and speeches to raise awareness and build pressure on the government to change the status quo. King’s notion of non-violence had six key principles. First, non-violence is a way of life for courageous people. Second, non-violence seeks to win the ‘friendship and understanding’ of the opponent, rather than their humiliation. Third, non-violence seeks to defeat injustice, not people per se. Fourth, those committed to non-violence must be willing to suffer without retaliation, as suffering itself can be redemptive. Fifth, non-violence chooses love instead of hate. And finally, non-violence believes that the universe is on the side of justice. In practice, non-violent mass protests were overwhelmingly responsible for the two major legislative gains of the Civil Rights Movement over half a century ago: the 1964 Civil Rights Act (CRA) and the 1965 Voting Rights Act (VRA).

Similarly, Nelson Mandela fought against apartheid, in support of equal rights for all South African citizens, through his speeches and non-violent protests. He was responsible for not only bringing the African National Congress (ANC) into power in South Africa, but he also united the two races of the country during his rule as president.

The implication is that although non-violent resistance may at first seem weak and inefficient in the face of oppression, it has proven to be a very strategic tool in the hands of marginalised communities to redress structural imbalances and claim rights to justice and self-determination. As Gandhi once said: “non-violence is the greatest force at the disposal of mankind. It is mightier than the mightiest weapon of destruction devised by the ingenuity of man”. However, for non-violence to succeed, it must inspire mass participation that cuts across racial, ethnic, class, regional, generational and religious boundaries. History teaches us that civil rights protests only succeed when actors transcend their identities. It also teaches us that the role of women is indispensable in such movements. Women must participate if a mass movement is to work: their leadership adds political legitimacy to protests, enhances credibility to call for non-partisan unity, and reinforces the importance of non-violent tactics.