by Ayokunu Adedokun
Africa, Americas, human rights
Comments are off 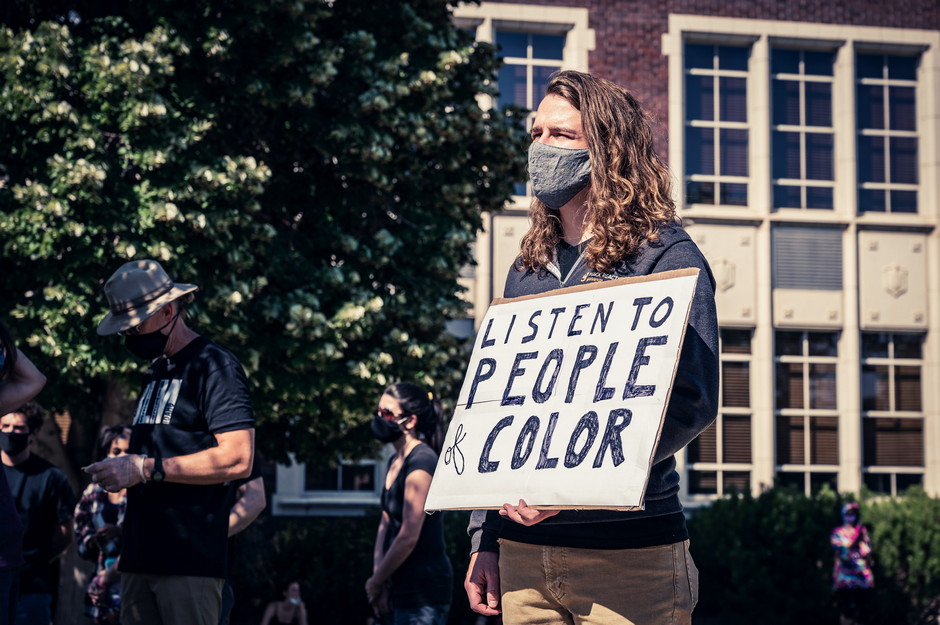 Inspired by the ‘Black Lives Matter’ movement, this new series is the product of an international team from UNU-MERIT that first came together in the summer of 2020. It aims to provide a substantial and accessible platform in the fight against racism, articulated by young African thought-leaders who put a premium on robust debate and other non-violent approaches. #blacklivesmatter #whiteforblack

Since the end of World War II, the United States of America has been the leading voice in the promotion of human rights, equality and non-discrimination. In fact, from 1933 to 1945, it was the US First Lady Eleanor Roosevelt who spearheaded the drafting and negotiations of the Universal Declaration of Human Rights, which eventually came into force in 1948. Human rights explicitly became a major part of US foreign policy in the 1970s, and since 1976 the Department of State’s Bureau of Democracy, Human Rights, and Labor has published annual reports on the human rights situation in 196 countries. From Africa to Asia, and from Latin America to Europe, human rights and democracy advocates look to the USA for support and advice in their struggles against authoritarianism and oppression.

However, 155 years after the 13th Amendment abolished slavery in the USA and more than 70 years of US global leadership in the promotion of human rights, African-Americans continue to be denied equitable access to opportunities, services, and fundamental human rights, according to a new Pew Research Center survey. In almost any way you measure it, the US system is designed to disadvantage the black community. The average white family has roughly 10 times the amount of wealth as the average black family. African-Americans have fewer assets than whites and are less likely to own their own home or business, to have health insurance or to possess a retirement account. Schools in predominantly white communities receive a far higher proportion of educational funding than those in predominantly black communities. White college graduates have over seven times more wealth than black college graduates. Police brutality is also more prevalent in black communities. A joint study by researchers at Rutgers University, the University of Michigan, and Washington University in St. Louis  finds that black men have a 1 in 1,000 chance of being killed by police. Meanwhile, a recent analysis conducted by the advocacy group Mapping Police Violence found that 99% of police killings between 2013 and 2019 did not result in officers even being charged with a crime. Even when black men and white men are convicted of the same crime, black men can expect a prison sentence that is 20% longer, according to a new report by the Washington Post.

Of course, the evidence presented above does not deny the progress made by and for black people in the USA over the past 60 years. Both the Civil Rights Act of 1964 that ended segregation, and the Voting Act of 1965 that guaranteed African-Americans the right to vote and stand for office are good examples of racial progress. Similarly, while huge disparities between white and black middle income families persist, the median African-American climbed from the lowest quarter of the national income into the 35th percentile from the 1970s to 2018. Meanwhile, more than 90% of young African-Americans (aged 25 to 29) have graduated from high school, compared to just half in the 1960s. However, while African-Americans are better off in some ways, they are still systemically disadvantaged by racial inequality. The implication here is that we still have a long way to go in closing the racial disparities in income, wealth, education and many more. 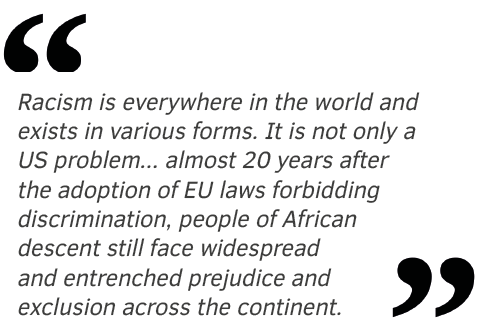 Racism is everywhere in the world and exists in various forms. It is not only a US problem. George Floyd’s death, the killing of Breonna Taylor in Kentucky, the shooting of Sean Reed in Indiana, the murder of Tony McDade in Florida, and the extrajudicial killing of Ahmaud Arbery in Georgia, have all garnered widespread international support with local demonstrations in at least 60 countries and across every continent. However, the global show of solidarity  and support to the African-American community also demonstrated the commonality of black struggles elsewhere in the world. From South Africa to Belgium, and from England to France, black people and ethnic minorities have been repeatedly denied equitable access to opportunities, services and human rights. In Britain, for example, Jimmy Mubenga, an Angolan deportee, died after being restrained by three G4S guards on board a plane at Heathrow airport which was bound for Angola in October 2010. Similarly, in Australia, David Dungay, an Aboriginal man shouted “I can’t breathe” 12 times before he died under the forcible restraint of five prison guards. Sadly, these are not just anecdotal reports of isolated incidents. In 2019, the European Union Agency for Fundamental Rights examined the experiences of almost 6,000 people of African descent across 12 EU Member States. The findings of the report are staggering. Between 2014-2019, 30% of respondents said that they had experienced racial harassment, while 5% had suffered physical violence at the hands of their white peers. Perhaps even more worryingly, the study showed that 41% had experienced racial profiling at the hands of the police. All these statistics show that while the EU is tolerant in theory, almost 20 years after the adoption of EU laws forbidding discrimination, people of African descent still face widespread and entrenched prejudice and exclusion across the continent.

The backdrop to Black Lives Matter

In response to racial injustice, inequality and police brutality, several efforts and initiatives have been implemented across the world. In the USA, for instance, African-Americans have invested robust energy in building up civil rights organisations since the 19th century. In 1909, for example, the National Association for the Advancement of Colored People (NAACP) was founded by W. E. B. Du Bois and other prominent activists and civil rights leaders. The NAACP’s goals were to ensure the political, educational, social, and economic equality of rights of all persons and to eliminate race-based discrimination. By 1944, the NAACP had expanded its nationwide campaign for racial justice by creating one of the largest mass-membership organisations in the USA with 500,000 members. In 1914, the Universal Negro Improvement Association (UNIA) was founded by  Marcus Garvey. The UNIA promoted racial pride, economic self-sufficiency, and the formation of an independent Black nation in Africa. And in 1957, Martin Luther King, Jr. and other civil rights leaders founded the Southern Christian Leadership Conference (SCLC), a group that coordinated the non-violent civil disobedience of local protest groups throughout the US South. Through peaceful means, the SCLC demanded the desegregation of department stores, restaurants, public restrooms, and schools. Though challenges still remain, the anti-racist movements of the 20th century brought on a great deal of progress, such as the Civil Rights Act of 1964 and the Voting Act of 1965.