Why we need to talk about migration & human security: Interview

by UNU-MERIT
migration, refugees, security
Comments are off 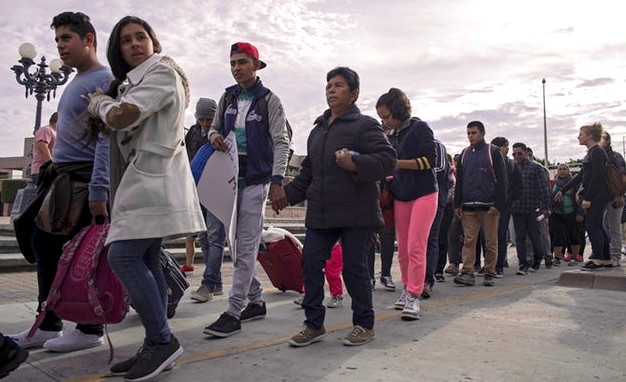 When most political leaders talk about migration and security, they usually refer to threats rather than opportunities. Prof. Khalid Koser, the executive director of the Global Community Engagement and Resilience Fund (GCERF), a Geneva-based public-private fund supporting local prevention of radicalization around the world, believes that’s back-to-front. Migration is not only beneficial to societies and economies, Koser says, but can also help prevent violent extremism.

“If there is a link between violent extremism and migration, it is that violent extremism is driving people from their homes, not that people are coming to our shores to commit violent extremism,” he said. “It’s so obvious that it shouldn’t need to be said, but it does need to be said.” Koser, who co-chairs the World Economic Forum Global Agenda Council on Migration and is editor of the Journal of Refugee Studies, spoke to Refugees Deeply about the need for a new approach to policymaking on migration and security.

Khalid Koser: One of the key challenges is to overcome some of these generalizations and be a little bit more specific. There’s around 232 million international migrants in the world. Most people move perfectly safely to work and benefit the economies and societies where they have arrived. Getting some perspective and definitions are important. The population where we should be slightly concerned is irregular migrants – people who either enter countries without authorization or stay on without authorization, such as overstaying a visa.

What evidence is there on the national security dimensions of irregular migration?

There is limited evidence because almost by definition irregular migrants are hard to track down. But there is no evidence that irregular migrants are any more inclined toward criminality or terrorism than nationals. Having said that, we need to understand that irregular migration is a challenge. It’s a challenge to sovereignty: A state needs to know who’s entering its country and who’s doing what inside the country. There’s no doubt that there are certain groups of irregular migrants in certain cities that are committing crimes, whether it’s pickpocketing or fraud or petty crime. But overall the data suggests that criminality, and absolutely extremism and terrorism, are a homegrown issue more than an imported issue.

This debate’s become polarized. Some people, especially advocates, just won’t even discuss the link between migration and security because they think it’s too risky – we’re already demonizing migrants and to even suggest they’re on a path to criminality is unfair. Others are pretty hard core and risk thinking that all migrants, refugees and asylum seekers are somehow criminally minded. Of course, the truth is somewhere in between.

We do need to confront the fact that there are small groups who are criminalized who may, in some cases, become violent extremists – and understand why. Is it to do with their nature, their migrant experience or the conditions that they find themselves in once they arrive? We’ve avoided doing that research because of nervousness that to even have that discussion is dangerous. I understand why, but I think we need to because if we don’t, then people who are less objective will.

How does integration intersect with security, both national security and human security?

Again I see lots of misperceptions. The big mistake is to suggest that because an important but small number of people have become foreign terrorist fighters, that immigration has failed in Europe. Integration in Europe has been immensely successful. Millions upon millions of people have come to Europe and flourished and helped our economies greatly.

If there is a weakness in the way we’ve approached integration, it’s seeing it as a one-way process – that it’s up to the state, and to an extent citizens, to integrate migrants. We need to recognize that this is a two-way street. The state and citizens have responsibilities, but so do migrants. For too long we haven’t had that slightly difficult discussion. But we shouldn’t be nervous about holding people accountable.

How would you rate the state of sharing best practices between different countries or different cities about integration and security? 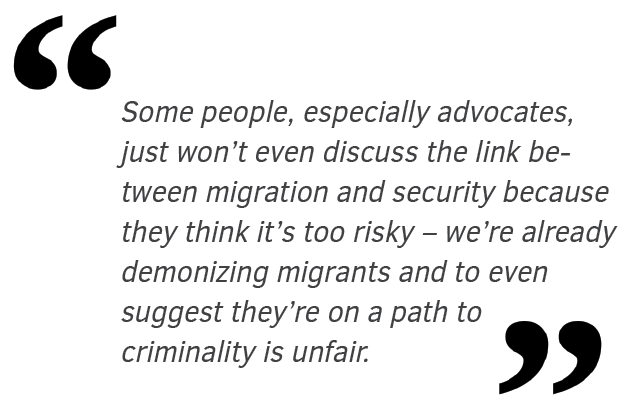 There are various forums to share experiences, whether formal or informal via policy networks or more formal migration groups. I regret the fact that there’s not [been] more political leadership on migration in the past few years, but at the policy level these discussions are taking place. The main lesson that’s been learned is that we need to move away from philosophies, like multiculturalism or assimilation, and focus on the more practical issues, like how they get an education and health and employment. It’s also important that when we talk about migration, this is now an urban issue, not a national issue. We are just beginning to understand that we need to involve our city administrations, our mayors, our urban leaders in this discussion because that’s where the success and risk factors lie.

Outside the political realm, do you see other potential champions of a more ‘human security’ approach to migration and security, such as international institutions or the private sector?

International institutions are playing a role. There’s some hope that the 2018 Global Compact on Migration will at least set the framework for a more globally responsible approach to migration. I think it will be a strong document but the implementation will be very difficult indeed. The private sector is the main employer, and probably the main exploiter, of migrants. On a policy level, we’ve been quite bad at meaningfully engaging the private sector, either because companies just get on with it by themselves or, for some companies, migration is still such a toxic issue.

I think that academia and civil society has become too advocacy-oriented. The role of academics is preserving space for an objective, sensible, evidence-based debate. I can understand their outrage at what they’re seeing, but I think it’s a shame that they’ve become so advocacy-based. Civil society is also sometimes too confrontational. The other big actor is ordinary people. I’m fairly convinced that most people in most countries in the world, are sensible about [the topic of migration].

What have you learned at GCERF about the effectiveness of interventions on migration and security?

One of the things GCERF is trying to do is prevent community tensions. In Cox’s Bazar in Bangladesh, we are finding that there are rising tensions. The local Bangladeshi communities are very tolerant but when 600,000 people arrive in a region of 2 million or so, that’s equivalent to 17.5 million people arriving in the U.K.

The most important thing to focus on is that migration and migrants can be part of the solution to violent extremism. Migrants send home enormous amounts of money, which is often invested in education, in healthcare, in social clubs, in building football stadiums, football pitches and so on. Poverty alleviation through migrant remittance is one way of addressing violent extremism. I’d also argue that migrants make global cities global. Global cities are tolerant and multicultural and exciting – they stand for everything that violent extremism doesn’t stand for.

The third point is that migration stands for all of the values that the global community has spent the past 100 years fighting for – tolerance, understanding, democracy, globalization and realizing each other’s potential. If you build walls against migrants, you are letting go of all of those values. The ultimate victory for terrorists is not killing people or blowing up a mosque, it’s about scaring us so much that we lose our decency and our basic values. If we react to migration as we are at the moment, then we’re handing victory to them.

What would be your top priorities for further research on migration and security?

While avoiding all generalizations and being aware of the appropriate criticism, I’d like a research project that starts with the unpalatable truth that there is some radicalization among mobile populations and, once you’ve got over that difficult pill to swallow, to understand why.

The second big issue for me is about how to bridge the gap between truth and perception. The evidence is clear that the vast majority of migrants move legally, safely and regularly and contribute to the societies where they’re going. Yet a lot of people would say that most migrants are irregular and are coming to take our jobs. We need to do research about ways to influence politics and policy and popular responses around migration that are clearly misinformed. We can look at other areas of public policy where confidence plummeted after a crisis but we’ve managed to rebuild confidence, like mad cow disease in the U.K. and nuclear power in Japan. Let’s learn how they did that and let’s do that with immigration.

This article originally appeared on Refugees Deeply. You can find the original here.