Why we care: International Women’s Day 2021

by UNU-MERIT
gender equality, UN Day, UNU
Comments are off 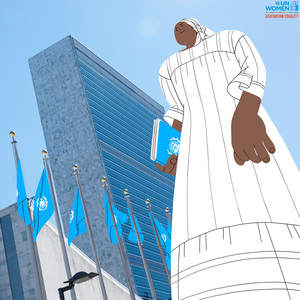 It is instructive to put those two resolutions in the chronological context of the Education Amendments of 1972 in the United States, enacted barely six months earlier on June 23, which comprised the first law to prohibit discrimination on the basis of sex in educational institutions receiving federal aid. It is also tempting to see the sequence as suggesting that it is education that must foster, and so precede, gender equality, much as SDG 5 on the latter comes after SDG 4 on the former (I’m on fragile ground here because it is happily recognized that there is no hierarchy to the order in which the SDGs are numbered and each depends upon the 16 others even as each of those 16 draw strength from each of the others, but it was just a thought…)

Resolution 27/3010 spoke of ensuring “the full integration of women in the total development effort, especially by emphasizing women’s responsibility and important role in economic, social and cultural development …(and recognizing) the importance of women’s increasing contribution to the development of friendly relations and co-operation among States and to the strengthening of world peace,” while the Charter of the United Nations University drew from Resolution 27/2951, when it spoke of “research programmes of the institutions of the University (including) among other subjects, coexistence between peoples having different cultures, languages and social systems; peaceful relations between States and the maintenance of peace and security; human rights; economic and social change and development..” The commonality between the mandates had found implicit iteration and, in the half century since its emergence as an idea and possibility, the United Nations University has built a network of institutions, global in geography as much as thinking, which have addressed issues of gender, including those directly affecting women, in a range of diverse and often unexpected forms.

Such as the nexus between the first three SDGs, on poverty, hunger and health; in the wake of the first World Food Summit in 1974, UNU established the World Hunger Programme the following year, led by the legendary Dr. Nevin Scrimshaw with his insistence on the principle of preventing malnutrition through locally produced, low-cost foods; UNU’s continuing work on this led to an initiative 25 years later where the World Health Organization and the United Nations Children’s Fund (‎‎UNICEF)‎‎ joined UNU in a collaborative project on the “composition of a multi-micronutrient supplement to be used in pilot programmes among pregnant women in developing countries.” At the United Nations University Biotechnology Programme for Latin America and the Caribbean (UNU-BIOLAC), Dr. José Luis Ramirez, the Coordinator, has worked extensively on Leishmaniasis, concluding the disease “is especially detrimental for women and young girls in poor, uneducated, and underprivileged societies because of isolation and exclusion of these women from all aspects of life, such as education, business, and social activities…in some areas, women are considered most exposed to mosquito bites because they usually have more active roles in farming activities, taking care of cattle, and dealing with manure and waste.” The International Institute for Global Health in Kuala Lumpur has established a Gender and Health Policy Hub “to generate evidence and accelerate action for gender equality in global health policy and programming,” described by its Director, Pascale Allotey, as “a window to capitalise on with the growing discourse on gender equality, catalysed by the SDGs, social movements, and efforts to build back better from the COVID-19 pandemic.” The Institute for Water, Environment and Health (UNU-INWEH) in Hamilton, Canada, concluded in a study that “the water-gender-nexus intersects with health. Thus, addressing gender and water inequities holds the potential to alleviate disease burden and have a significant impact on achieving the SDGs.”

Dr. Bartel Van de Walle, Director of the United Nations University-MERIT (UNU-MERIT) in Maastricht notes  “over the last tumultuous year, our female researchers and PhD fellows have produced several research reports and policy briefs on the COVID-19 pandemic;” using the base of 2016 data in Ghana to examine gender gaps among informal enterprises, researcher Tatenda Zinyemba, found COVID-19 restrictions “may affect the sales of women entrepreneurs more than men, as women entrepreneurs will have to look after their children and have other caregiving or family obligations.” The United Nations University Institute for Environment and Human Security (UNU-EHS) launched last year a project on “Climate risk insurance in the Caribbean”; among its conclusions was that “the needs of men and women may differ, and implementers should incorporate gender considerations into the product design, recognizing that women are often more impacted by extreme weather events.”

The Institute in Macau (UNU-Macau), over the course of its work in migrant technology, “wondered what role technology could play to improve victim identification; in turn informing more responsive and effective policy to end violence against women and girls. In partnership with the Mekong Club, we developed Apprise Audit, a mobile solution to enhance the privacy, inclusivity, frequency and consistency of screening of workers in factories, allowing workers to report issues of exploitation more safely and privately. One of the key findings of our impact assessment of the tool was that migrant workers (and female workers in particular) felt more comfortable using the app to report on working conditions than in in-person interviews. The app also allowed auditors to unmask gender-based labour abuse and exploitation, such as debt bondage, harassment and violence, and reproductive health discrimination.”

At the Institute for the Advanced Study of Sustainability UNU-IAS in Tokyo, a 2018 policy brief looked at gender from the perspective of two SDGs; education (SDG 4) and responsible consumption and production (SDG 12) and concluded that while progress had been made on gender mainstreaming in both areas there were significant gaps and a holistic approach is lacking; one of its recommendations was to “provide women with educational opportunities in alignment with their own development aspirations.” UNU’s Operating Unit on Policy-Driven Electronic Governance hosted a conversation with Elsa Estevez, UNESCO Chair on Knowledge Societies and Digital Governance, who noted “gender balance, particularly in Computer Science, is still an uphill struggle in many regions of the world. For instance, in Argentina, at the Universidad Nacional del Sur (UNS), only 15% of students that pursue an undergraduate degree in Computer Science are women. In the United Kingdom, female students in Computer Science reach 19%.” As 11 year old Samaira Mehta, from the United States, the founder of Coderbunnyz and Codermindz, two board games that introduce children to computer programming and artificial intelligence says in a powerful virtual exhibit , hosted by the United Nations, “if we make all voices heard, who knows what incredible possibilities lie ahead. Anyone – a child, a girl, could come up with an amazing idea that could revolutionize the world.”

Peace as an objective of both the resolutions cited at the beginning, finds reflection in a contribution to the UNU Centre for Policy Research  by Drs. Rebecca Brubaker and Cristal Downing, who consider what priorities the Security Council should take regarding Women, Peace and Security (WPS) from 2021 and beyond. “Given the relevant historical accomplishments of each of the incoming 2021 cohort – including India’s prioritization of the inclusion of women in its peacekeeping contingents, Norway and Ireland’s experiences of ensuring women’s participation in peace processes, Kenya’s recent renewal of its National Action Plan on WPS, and Mexico’s January 2020 launch of a feminist foreign policy – the Security Council is well-positioned to continue to drive implementation of the agenda this year.

And next week, on March 12, UNU’s Institute on Comparative Regional Integration Studies, UNU-CRIS, hosts Marvi Memon, former Social Protection Minister of Pakistan, to discuss her recent book Gender, Pakistan and UN Peacekeeping, which “explores the link between gender and conflict and proposes a gender-responsive agenda to overcome the disparity between policy and practice in protecting women in fragile environments”.

The pace of women’s political representation has been uneven and slow; as I write this, two relatively recent anniversaries drive home that point – it was as late as March 4, 1917 that Jeannette Rankin of Montana became the first female member of the United States House of Representatives and it was a further sixteen years later, on March 4, 1933 that Frances Perkins became the first female member of the United States Cabinet. (Even at the United Nations, as late as 1979, when William H. Barton, Canada’s Permanent Representative, met Pope John Paul II during his visit, he was accompanied by a lady;  the UN official in attendance instinctively introduced them to the Pope as husband and wife; she was in fact  Flora MacDonald, Canada’s Minister for External Affairs.)

When the 1995 Beijing Declaration affirmed  in a one unequivocal paragraph that comprised the single sentence  that  “women’s rights are human rights,” it gave voice to the truth that in their advancement , all human rights would be furthered, far from fragmented , as all great revolutions of the spirit and mind have accomplished, elevating the aspirations realized by a demographic group which had hitherto been denied to that of a truly integrated society as a whole. As  Institute for Natural Resources in Africa UNU-INRA Accra, Ghana Director Dr. Fantina Denton says in an interview with the Institute for Integrated Management of Material Fluxes and of Resources UNU-FLORES in Dresden, Germany, “problems that women face are not always limited to women. By nature, women think for their whole community. They may be household managers, responsible for their community activities as well – we must find a way of ensuring that we are not pitting women against men. If we were to create solutions for women, we would have to also take…men into account. In search of solutions that would result in more gender equality and greater empowerment, it is very important that women and men are not pitted against each other but are seen as part of a continuum.”

Twenty years before the SDGs were fashioned, the Beijing Declaration spoke of “people centered sustainable development”; a centering on the vast global community of persons in whose dignity and worth the Charter of the United Nations is vested. The month of March will always bring to personal mind the first headline I can recall reading, on 22 March 1960, about the massacre  in Sharpeville, South Africa , the previous day, when 69 peaceful protesters were killed, many shot in the back while running away. On 23 June 1994, the United Nations celebrated the “elimination of apartheid and establishment of a united, democratic and non-racial South Africa;” I was fortunate to be in the General Assembly Hall that day and recall hearing Canada’s ambassador, David Malone, as he spoke of the “frank admiration for the people of South Africa, who have overcome years of hatred, fear and intolerance to achieve through patient negotiation and compromise a revolution more radical, more permanent and more all-pervasive than anyone could ever hope to achieve through warfare. The lesson of South Africa is one from which we can all learn.”

If the radicality, permanence and the all pervasiveness of the revolution in women’s rights has been assured, and remains a lesson still in the learning, we owe much to the patient negotiation and compromise exercised by those in its vanguard, and their bedrock of scholarship and reason which the global academic community, through institutions like the United Nations University (as whose Rector Ambassador Malone completed eight years this Monday) has, with care and conscience, crafted.

Adapted from an article on the UN website. Read the original article.