by Francisca Sassetti
Africa, gender, migration
Comments are off

The male perspective dominates in times of conflict – think of the generals, the diplomats, the doctors. But what about the women? What is a gendered perspective of war and what value can it add? Female narratives in conflict scenarios have long been neglected, overlooked or forgotten. Recently, however, more and more stories have emerged – including Doaa Al Zamel’s incredible story written by UNHCR’s Melissa Fleming – which among other things moved me to share the stories of my own grandmothers, Lena and Leonor. For this article, I interviewed Lena from my mother’s side about her story of moving to Mozambique in 1971 amid the Mozambican War of Independence. On my father’s side, because of Leonor’s passing in 2017, I spoke with relatives and checked documents to learn more about her migration experience. 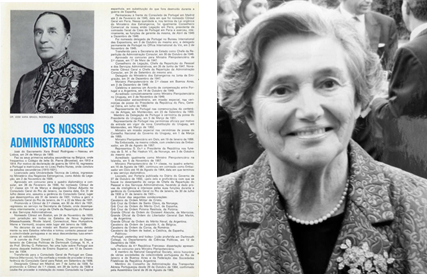 My paternal great-grandfather, José, and my grandmother, Leonor.

My grandmother Maria Leonor Xara Brasil Rodrigues Sassetti (1933-2017) (Fig. 2) was the second of four daughters born to the Portuguese Ambassador José Xara Brasil Rodrigues, who served in Latin America, North America, North Africa and Europe. Each daughter was born on a different continent. The eldest, Maria Teresa, was born in Rio de Janeiro, Brazil, in 1931. The second daughter, my grandmother, was born in Lisbon, Portugal, in 1933. The third, Maria José, was born in Boston, USA, in 1935. Finally, Maria Conceição, was born in Casablanca, Morocco, in 1937. My grandmother always said that each daughter carried with her a piece of her birthplace.

My grandmother Leonor and her sisters experienced adversity in the countries they lived, particularly in the aftermath of conflict scenarios. My great grandfather was deployed to Casablanca in 1937 during the French protectorate in Morocco, where the family lived in a climate of great political and socioeconomic instability.

After Leonor’s youngest sister was born in Casablanca, the family then moved to Madrid, arriving two months after the end of the Spanish Civil War in 1939. Three years later, at the height of the Second World War, they moved to occupied Paris. As my great grandfather served as Consul General in Paris from 1942 to 1946, he was able to issue thousands of visas and passports to Jewish refugees, as more notably done by Aristides de Sousa Mendes. In Spain and France, they witnessed the post-war mass migrations across Europe – invariably a scene of famine, poverty, death and destruction.

The family stayed in France until 1949, at which point they moved to Buenos Aires at a time when Juan Perón was President of Argentina. The years they lived in Argentina were also marked by political turmoil and socioeconomic convulsion. At times, they experienced terror and fear, which very much constrained their lifestyle. They left Argentina the year after Perón was overthrown by a coup d’état in 1956. Their father’s last post was in the relative calm and peace of Oslo, Norway, where they remained until his retirement in 1964.

In most of the cities where my grandmother lived, she attended public schools, where she would meet many local people, giving her a first-hand understanding of the struggles of other families, and where in turn she learnt to respect cultural differences.

The post-conflict scenarios that my grandmother Leonor found throughout her migration journey became imprinted on her psyche, shaping her into a pacifying and conciliatory figure in her personal and professional environments. From her family of six moving across the globe to a family of nine of her own, my grandmother sought unity in times of struggle and rationing, and fostered the importance of sharing and peace. 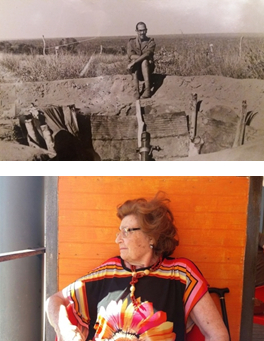 My maternal grandfather, Zé, and my grandmother, Lena.

My grandparents’ generation grew up during the Portuguese authoritarian regime Estado Novo (New State), also known as Salazarism, which was inspired by Italian Fascism. This was consolidated by a military coup in 1926, but only officially established on 11 April 1933. Estado Novo became notorious for its refusal to decolonise and liberate its overseas territories – mostly located in Africa – which led Portugal to fight long wars in countries like Angola and Mozambique. The regime would end in 1974 with the Carnation Revolution, in what became known as the third wave of democratisation, according to the political scientist Samuel P. Huntington.

In early 1971, my maternal grandfather Zé – José Manuel Machado Nunes – was called up for military service in Mozambique’s then capital Lourenço Marques (today Maputo). He served there for two years during the Mozambican War of Independence, which lasted from 1964 to 1974.

When my grandfather left for war, my grandmother Maria Helena Duarte Paciência Machado Nunes – whom we call Lena – was already pregnant with their second child. Terrified of losing my grandfather, and having given birth to my aunt, my grandmother made the decision in the summer of 1971 to move to Mozambique with their eldest daughter, my mother Luísa, who at the time was two years old.

My grandmother Lena recalls adapting to life in Mozambique during the war. There were everyday challenges, yet they tried to blend in with local populations. Since my grandfather Zé was a doctor prior to moving to Mozambique, he would often provide healthcare services to locals during the war. This allowed my grandmother to get to know the new culture, traditions and people at first hand – memories that she  cherishes to this day.

Being a woman with young children in a war zone was, of course, far from easy. In my grandmother’s case, she was the wife of a civilian, who had joined as an ensign. While career military officers had access to specific benefits for their families such as military protection, families of ensign officers – mostly civilians – did not enjoy the same benefits, which meant that there were more risks for people like my grandmother. There was, for example, the ever-present danger of landmines, violent attacks, and outbreaks of disease. Shortage of food and water supplies were another concern for my grandmother, especially because my mother and aunt were very little, and milk, and especially milk powder, were extremely hard to acquire.

Migrating to Mozambique during the conflict was a challenging time for my grandmother, as a woman, a wife and a mother. While men were part of battalions, the few women and children who joined their husbands were often unsupported and unprotected. When my grandfather’s unit was on the move, my grandmother would have to move behind them, taking their daughters by herself. Keeping a positive outlook helped her through these challenging times, but it is no surprise that my grandmother “felt relieved to return” safely to Portugal — with the whole family — at the end of 1972.

I would like to dedicate this article to my grandfather Zé who passed away soon after it was written. May he rest in peace and may we all hear our grandparents’ stories before they leave us.

About the Author
Francisca Sassetti is a Research Assistant at UNU-CS working on the Migrant Tech project. She is a recent graduate from the London School of Economics and Political Science (LSE), where she studied comparative politics and democratization in Sub-Saharan Africa.
Share this page