UN75: ‘It all starts with partnerships for the goals’ – with local leaders and the next generation

by UNU-MERIT
Director, partnerships, UN75
Comments are off 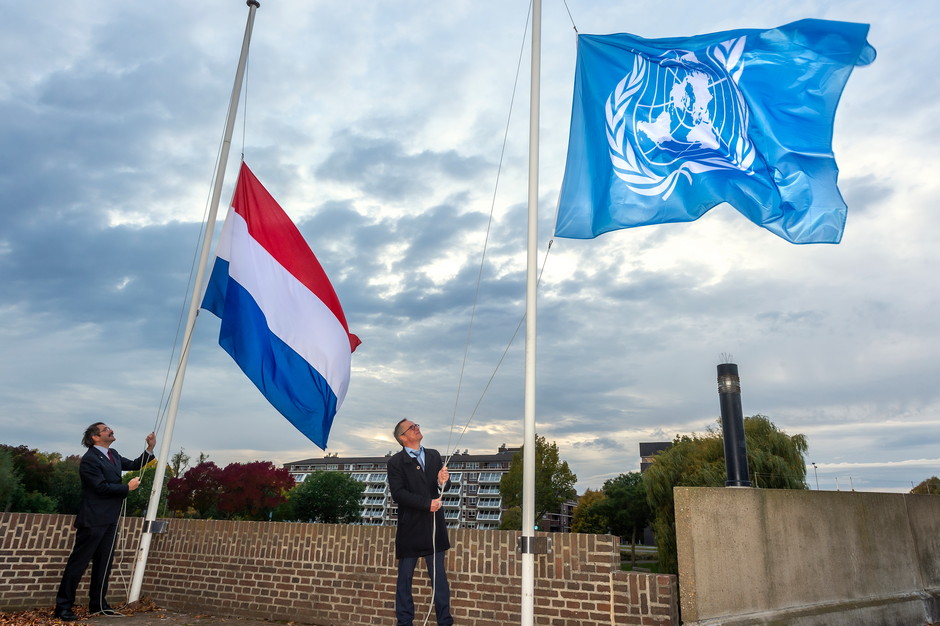 This week our new director Bartel Van de Walle met regional governor Theo Bovens, ahead of UN Day on 24 October 2020. The two leaders discussed the state of the province and the planet, how to ensure young people are listened to and empowered, and how our staff and fellows are ambassadors for the UN. Below is a transcription of their discussion, lightly edited for clarity.

What does 75 years of the United Nations mean for you?

Bartel Van de Walle: First of all, the UN is already 75! I think that’s an impressive anniversary. The UN started off in the aftermath of WWII, to make sure that a world war wouldn’t happen again. Of course a lot of things have changed, and if you look at the world today, there are a lot of new challenges. If we look at what is happening in the USA, for the first time we see a major influencer who is not that interested in multilateralism and in international agreements and in the UN. That’s the bad thing.

But on the positive side, I see a lot more engagement from other people than state actors or governments. I see ordinary people, and people in the field of research in particular, becoming more and more influential. That’s where I see a role for UNU-MERIT, but also for all the citizens in the world. I feel and see that connections are being made between people directly, as “wereldburgers” or world citizens, beyond borders.

On the topic of climate change, which is probably the biggest challenge that we are facing internationally, we see a lot of bottom-up efforts from people, at the grassroots level. And I think that it is very good to see that the ideals of the UN are becoming more distributed among the people. I see this as a good evolution, and I also see a role for us to play. So that’s what I think of when I reflect on UN75: it’s the organisation’s history and it’s a new evolution.

Theo Bovens: For me, the UN is connected to development, to UNESCO, to UNICEF, to the World Food Programme etc. As a youngster, I grew up doing charity actions for the rest of the world, donating money and selling Christmas cards for UNICEF, with the idea that we belonged to the same world and that we were responsible for others in the world. That is something that is in the genes of the UN.

What strikes me this year with COVID-19 is that multilateralism is not the path that people are choosing to take. People are reacting by creating borders again. We have seen concrete roadblocks rising again between Belgium and the Netherlands, between Lanaken and Maastricht.

That’s why I think that it’s so needed to stress the importance of multinational organisations like the UN, the EU or NATO. If you look at the world as one, then you have to connect it through local communities. You have to connect local people with their neighbours. Multinationalism starts in the region, in your own region. And this is not a paradox. You can combine the idea of living together in your own neighbourhood, in your city, in your home region, with the globalist idea of being part of one world.

With climate change, it’s impossible to solve any climate problem in your own region in the world. This is a world problem that has to be tackled within a world system. 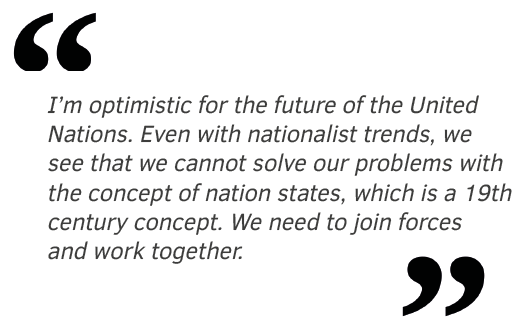 Seventy-five years ago, the UN was founded as a peacekeeping instrument. That was a new role that its predecessor, the League of Nations, did not have. The peacekeeping operations, in which the Dutch army is also represented, in UNIFIL, in Lebanon, in Mali, are very important. You can see that we are responsible for peacekeeping in other parts of the world.

What is the role for local governments in achieving the 2030 agenda?

TB: Let me first say that the Sustainable Development Goals are not specifically mentioned in the coalition agreement of the current government of Limburg. But some of the SDGs can be found in certain policy documents related to energy transition or housing. On the other hand, I think that our policies on climate or on social policy are aligned with the SDGs. I think that governments can do better to align their policy and to try to explain their policy with the vocabulary of the SDGs. If you look at what the SDGs stand for, you can actually see a lot of alignment with our local policies.

What are Limburg’s priorities for the future, and what is being done to address them?

TB: Our priorities in Limburg are similar to the priorities identified in the global UN75 survey, including calls to address inequality and climate change and to increase solidarity.

On the issue of inequality, we need to reduce the gap between the rich and poor, between people who have an education and those who don’t, between the healthy and less healthy. Reducing these gaps is a priority in our social and economic policies.

Concerning climate policy, we call it ‘energy transition’ policy because it enables us to bridge the gap between the left-wing and right-wing parties in our provincial government. We can reach both political groups with the themes of ‘energy transition’ and ‘circular economy’ because that’s where the left and the right groups are thinking along the same lines.

On solidarity, we try to be more present in the minds of the population, so that people are more satisfied and prouder and have the drive of being engaged in society. We try to be more involved with local organisations and to help people connect with each other. Solidarity also means not leaving people behind. I think that the Limburg identity or what I call the Limburg soul can be a driving force to connect people. It’s about giving every Limburgian the feeling of belonging to a society and to a community. We do this for example by subsidising local cultural organisations such as music bands or theatre companies. 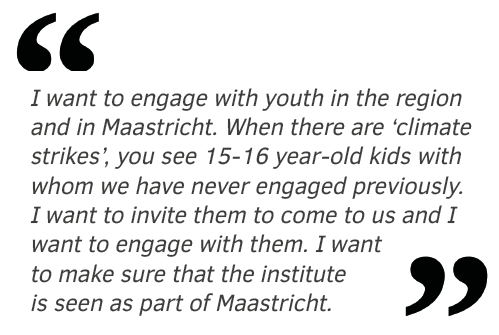 On what specific topics can UNU-MERIT make a difference?

BVdW: UNU-MERIT is a research and training institute of the United Nations. We have in the past mostly focused on research and done excellent academic research, which we want to continue doing. But I want to open up the institute much more than it is now. And so I want to engage with youth in the region and in Maastricht. When there are ‘climate strikes’, you see 15-16 year-old kids with whom we have never engaged previously. I want to invite them to come to us and I want to engage with them. I want to make sure that the institute is seen as part of Maastricht and Limburg. That has to happen through activities that we need to initiate ourselves, for example by organising events like a Citizen Parliament, or a mini UN Assembly where people would come to us.

In terms of research, I’m coming from TU Delft, which is a very technical university. What we had there, also at the department that I was leading, were labs. Labs sound like people with white coats and all kinds of equipment, but labs can also be very open and labs are places where you can experiment with new ideas, so really think, and try things out and do new things. So I want to create a number of labs in the institute, with people from the region, to ‘co-create’ the future and innovate together. We have some plans on starting these labs, and I would really like to have your ideas on that. Labs don’t have to be in our building. They can also be open, in the city. I really want to create a bigger presence for our institute.

We are also looking for partners outside of the education field, although of course education for us is key. We want to train and educate people, and so there will always be from our perspective an idea to learn, or to investigate together what things mean from a global perspective. We’re always focusing on developing economies and that’s our core business. But what does that mean for here and how can we learn and exchange knowledge? So I see it much more as an exchange of the knowledge and the tools that we have. So, as soon as this COVID-19 situation is over, I want to initiate these city labs, which I must say will be new for us. We’re very much an institute of very hardcore research – we’re academics to a large extent – so it will be a bold step to leave our comfort zone.

We also have executive education courses for mid-career and professional staff, and we want to do more. We already have a couple of initiatives, and people in local governments could indeed take some education courses with us. Initiatives like these can show much more about our institute and what we have, because we have so much in our institute. It’s just not shown enough right now and should be shown more.

TB: In the city, we have initiatives like Studio Europe, and organisations like the United World College, the Maastricht School of Management, and the European Centre for Development Policy Management, which could be very interesting to work with. So I think that there is already a basis for cooperation.

Do you feel that UNU-MERIT is also like an embassy for the UN?

BVdW: Absolutely, absolutely. The way you described strengthening the sense of identity among the people of Limburg, I think that we are doing the same search for our unique identity within the institute. We have academic links with the university, so some people ask ‘what are we, are we academics, are we UN?’ So since I took the job in September we started a wide consultation process within the institute to try to define what it is that makes us unique. And this is exactly what came out: we are actually all ambassadors for the UN. But we also want to contribute to how the UN is developing and this is something that we can do through our research. We’re really good at research, but how does our research help in forming new policies on all kinds of pressing topics? We have people working on migration, we have people working on energy transition and circular economy, on poverty, on inequality. We have people working on innovation, which is one of the core themes of the institute. But the question is: How do we show better to the world that this is where we can contribute? And the world starts here.

And then of course I’m very interested in exploring what the province would like to see from us. I’ve given myself 100 days to understand the institute. I want to have a new plan ready by the summer of next year and I want to start filling it in in the spring.

We have always wanted to have an advisory board that would also include local and regional actors, and I very much would like to have the Province on board so that we can have a much better view on what we can do together. It would be really good if we would have more visibility in the city, in the region, in the province. And this starts with SDG#17 – ‘Partnerships for the Goals’. 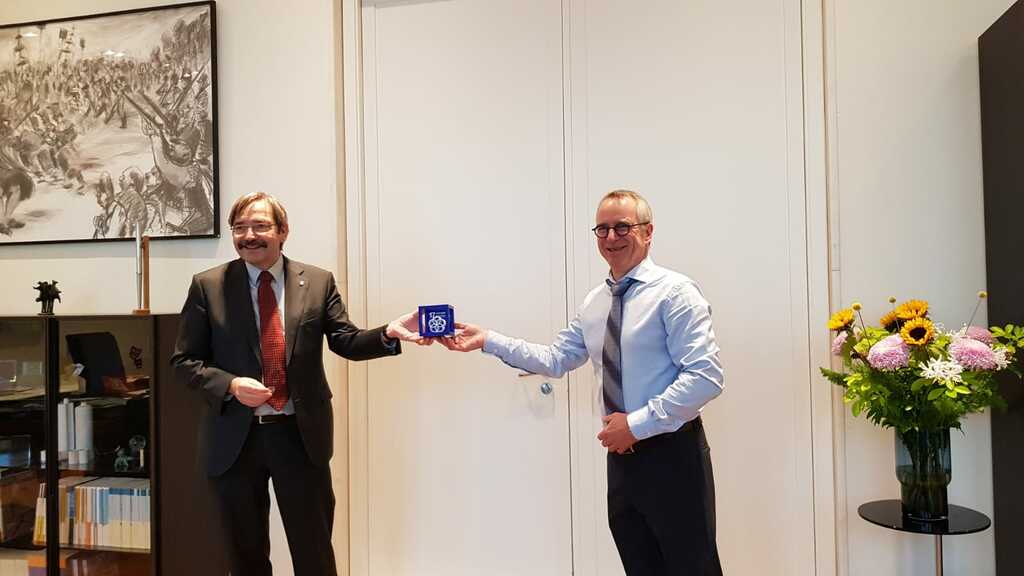 Do you want to be part of the conversation? Share your views here on the official UN75 survey.