Throwing development money at the ‘migration problem’ – is it completely misguided?

by Melissa Siegel
development, European Union, migration
Comments are off

There is very little evidence that development aid and interventions affect migration decisions. The evidence we do have is mixed and often shows the opposite of the intended consequence. What does this mean for policymakers?

Addressing the ‘root causes of migration’ is popular in policy circles and has come again to the forefront of policy discussion and debates, particularly since the so-called ‘refugee crisis’ in Europe in 2014 and 2015. For this reason discussions about why people move strongly focus on poverty and a lack of development. To show that they are taking action, Europe (as well as other actors) have decided to throw money at the ‘problem’ by increasing development aid targeted at the ‘root causes of migration.’ The question that follows from this is: does development (aid) actually lead to a reduction in migration? Is the policy and programming that is being made backed up by evidence proving that this is indeed the right direction to go?

For this overarching question to be answered, we need to first ask three key sub-questions, which have also been addressed by Clemens & Postel (2018): What are development interventions? Do they work? Do they deter migration?

What are development interventions?

So finally, do development interventions influence emigration? In theory, aid could both increase migration and decrease migration through different channels. To answer this question, it makes sense to first step back and look at the evidence on the overall effect of development on migration.

At the macro level, De Haas (2010) clearly shows that at low levels of development emigration takes on an inverted U-shape, meaning that there are lows levels of emigration. As development increases, stocks of emigrants begin to rise until a tipping point, where the level of the stock of emigrants decreases but still does not come close to the level of less developed countries. 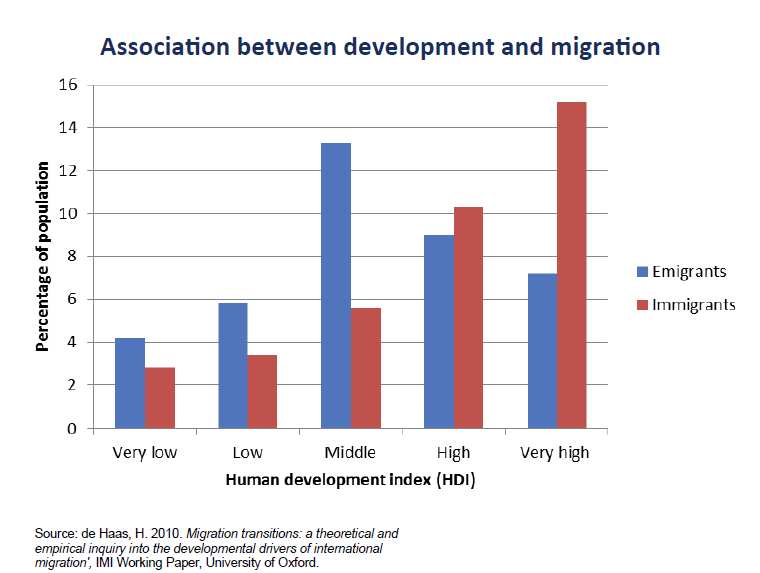 If we look more specifically, we see that different types of aid influence migration in different ways. According to Clemens and Postal (2018) we see that emigrant stocks fall with youth employment. Gamso & Yuldashev (2018) show that aid supporting rural development had a very small positive effect on the reduction of rural migration. Lanati & Theile (2018) find a negative relationship for both poor and more well off countries with regard to aid related improvements in public service but the bilateral link is still there. Lanati and Thiele (2018) also find that the effect differs by type of aid, whether it is delivered in the country or not. Gamso and Yuldashev (2018) look at aid to the social sector or governance aid and find a deterrent effect. Moullan (2013) found that health aid reduced the amount of health worker emigration.

At the micro-level, a review of social protection interventions by Hagen-Zanker and Himmelstein (2013) finds that there is no consensus in the literature. Interventions are being associated with both positive and negative effects on migration and the specific context also matters.

There is still much that we do not know with regard to how development aid and interventions affect migration decisions. However, there is a clear link between the influx of migrants (especially very visible irregular migration) and development spending in Europe (Knoll, 2017) as well as in other countries.
Key insights:

This article is republished from Mignex. Read the original article.