The UN’s vision for a digital future: ‘Will our dignity and rights be enhanced or diminished?’

‘Digital technology is shaping history. But there is also the sense that it is running away with us. Where will it take us? Will our dignity and rights be enhanced or diminished? Will our societies become more equal or less equal? Will we become more, or less, secure and safe? The answers to these questions depend on our ability to work together across disciplines and actors, across nations and political divides.’ – António Guterres

Published in June 2020, the UN Secretary-General’s Roadmap for Digital Cooperation was the focus of a Chatham House high-level event, featuring among others UN Special Adviser Fabrizio Hochschild. In the video above, he and the other panellists discuss strengthening cooperation in the digital space, and boil down the report into three simple concepts: connect, respect, protect.

Then when the Q&A began, I asked the question: ‘What role can the UN play in protecting our basic human data rights?’ (26m:30s). The question was answered by Marietje Schaake, International Policy Director at the Cyber Policy Center, Stanford University and former Member of the European Parliament (2009-19). Her reply below was transcribed with artificial intelligence software (appropriately enough), then lightly edited for clarity. 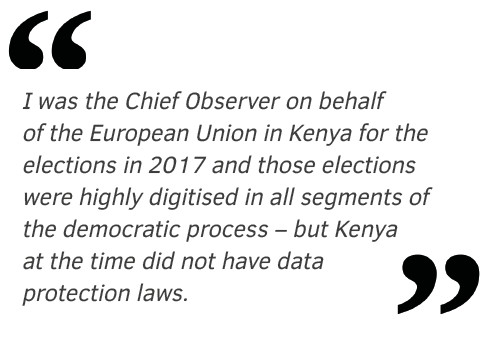 Marietje Schaake: ‘The fact that there is a Roadmap, and that so many sensitive topics have not been shied away from, represents a first step in implementing an action plan. And I think from the UN side, we have to appreciate that that’s not always easy.

But I hope that the mutual dependence is clearer than ever when it comes to the digital domain and that the open Internet must lead to a revamping of multilateralism and a shared sense of purpose, which I hope the UN will be a driving force behind.

Obviously, it doesn’t mean that all the different stakeholders that the UN has to work with and has sought to bring together in the high-level panel all have the same vision, or the same role or the same responsibility – but it is important to put these subjects that are high stakes openly on the table.

I think the Roadmap highlights where threats and challenges are, and where opportunities are, along with putting a lot of emphasis on access and inclusiveness, on human rights and the public good, and openness from a technological and access point of view, which I think is crucial.

I hope it will clarify some of the ‘hows’ of how universal human rights can be safeguarded in the context of digitalisation. How for example, the roll-out and facilitation of access can go hand-in-hand with an articulation of the protection of rights, and maybe conditionality where appropriate, when governments are being supported. Also how security, which I think is an integral part of development, cannot only have an economic component but where new risks must be appreciated.

From a human rights point of view, too often we see that the roll-out and the making available of new technologies, including by the private sector, does not get accompanied by safeguarding people. For example, I was the Chief Observer on behalf of the European Union in Kenya for the elections in 2017 and those elections were highly digitised in all segments of the democratic process – but Kenya at the time did not have data protection laws. This is just an anecdotal example of how digitisation without a rights framework can lead to new challenges for people. So the goal now is to have a human-centric approach, which is very clear from the UN’s Roadmap and the results of the report of the high-level panel.

Another question that will have to be addressed is ‘how’ to make the Roadmap work in terms of governance. How will the public good, the common good, which is clearly mentioned in the Roadmap, actually be safeguarded and what does that mean for responsibilities and accountability of the private sector, which is powerful in unprecedented ways in the digital domain?

We have to be conscious of the fact that when the benefits and the profits are all going into private hands, when the price of risk is being paid by the public, then we have a problem. This raises questions about who is responsible in a multi-stakeholder context, and how the accountability gap can be closed.

So which values are going to be leading? We cannot be naive about the competition between governance systems. First, there are democratic models that the EU for example is trying to articulate and continues to lead in. Second, there are more authoritarian models that are gaining power, whether we like it or not. And third, there is a private governance model, which has to be recognised for what it is.

I think the UN, like no other international organisation has this global view, this global mandate, this global remit. It will be an extremely challenging task to balance the different interests, but one that sooner or later it will have to start tackling. In other words, tackling the value questions and the principles questions, so it will have to mitigate the big differences in interests that are all at stake.

I think COVID-19 has underlined what is at stake and how some of the entrenched interests and roles can be accelerated, even if we thought they were already quite powerful, like that of the private sector. The role of children has been mentioned, and I think a lot of parents must have been quite frustrated, after trying to teach their kids not to look at screens too much, suddenly having to depend on screens for their kids to go to school.

The same can be said for health as an entirely new sector, where big tech companies have made huge inroads. Historically, health data has been protected with very high standards, but is now being opened up in a way that I think will have many consequences for notions of surveillance of people, for notions of data security and data protection that will have to be looked at. 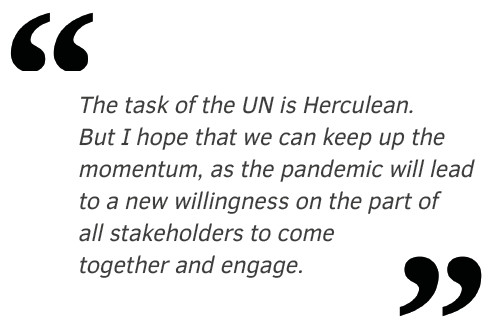 So, to conclude, I think the stakes are high, the urgency is extraordinary. The task of the UN is Herculean. But I hope that we can keep up the momentum, as the pandemic will lead to a new willingness on the part of all stakeholders to come together and engage. There will no doubt be a challenging political battle emerging and that’s an open invitation. So that’s how I see the Roadmap – inviting engagement by multiple stakeholders to frame the next steps, and to actually start engaging in the challenging discussions that cannot be avoided such as those about values and governance.