The right to immigrate: An interview with Prof. Arjen Leerkes

by Sueli Brodin
migration, Netherlands, UN Day
Comments are off 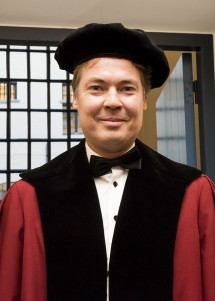 Every 18 December, the UN celebrates International Migrants Day to recognise the efforts, contributions, and rights of migrants worldwide. A perfect moment to speak with Arjen Leerkes, who was appointed Professor of ‘Migration, Securitisation and Social Cohesion’ at Maastricht University and UNU-MERIT last month, about the position of immigrants in our societies. Where can asylum seekers go when they are trying to flee their country? Should they stay in the same region, or can they go elsewhere?

“In surveys, people who feel that asylum seekers should stay in their region of origin are likely to have a more nationalist view on migration issues,” says Arjen Leerkes. “However, people who see themselves as members of a world society will tend to approach the idea of country borders from a more global point of view and take more into consideration the perspectives of people in other countries.”

Leerkes’ research work on migration has so far focused on two main areas: on the one hand, he has studied various aspects of migration control, addressing topics such as migration policing, return migration, deportation, and admission policies for family reunification, among others. On the other hand, he has investigated the link between integration policies in host societies and patterns of immigrant crime. “Policymakers often use the argument of security as a justification for more immigration control. Research can help to make clear what is real and what is imagined,” says Leerkes, whose study findings have already influenced Dutch migration policies.

“My work on the concept of perceived legitimacy was used in the argumentation to bring change in the Dutch immigration detention regime and has contributed to making it less punitive. There was an assumption, not so much in the law itself but rather among policymakers and advisors, that detention would pressure migrants into complying with the rules. My research showed that this effect was limited, and that it was more important for example to help migrants to understand why they did not get a residence permit.  My recommendations also led to more attention being paid to the respectful treatment of migrants during detention. My analysis indicated that very strict policies could lead to health issues among migrants and that return migration policies could be improved by investing more in keeping migrants physically and mentally healthy. Obviously, migrants should receive good treatment for human rights reasons, but politicians and policies can also be influenced by pragmatic considerations,” says Leerkes.

The expertise that Leerkes has gathered in the Netherlands, notably through his research work over the past 10 years at the Ministry of Justice and Security, is quite unique. “Not many people are granted the kind of access that I have,” he explains. He now wants to bring his insights into the international arena. “There is a similar tendency in other countries to use this type of deterrence logic, such as when dominant countries unilaterally decide to use their power to impose their interests on others. I want to show that such policies are unlikely to be effective because they do not take into account the notions of perceived procedural and distributive justice.”

Leerkes says that his new appointment at Maastricht University and UNU-MERIT will allow him to expand his research field beyond the Netherlands. 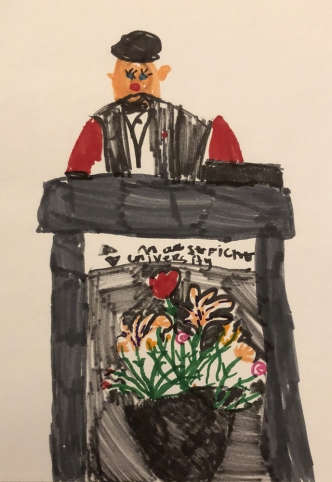 Portrait of Leerkes by his 6-year-old daughter.

At a time when seven EU states and the US have refused to sign the UN Migration Pact, Leerkes argues that it is important to convince them that, instead of building walls which cannot possibly be fully controlled, it is in their own interest to engage in a real genuine international dialogue about the right to immigrate.

“In surveys, we ask people questions like: ‘Should more, or less, migrants be allowed into the country?’, or ‘Should jobs be only for national citizens or for those who are the most qualified?’ But we rarely ask questions about the perceived right to immigrate,” Leerkes says.

He aims to show that migration decisions cannot be explained only through objective and quantifiable economic indicators such as unemployment rates or income differences. “It would be wise for Western countries to have a more open labour migration policy,” he says. “The point I want to make is that in our interconnected world, migration policies need to start accommodating the perspectives of countries of origin. My research has shown that attitudes, such as the meaning that people attach to borders, are important predictors of immigration intentions.”

One of the developments that Leerkes plans to study further is the influence of the idea of “world citizenship” on immigration intentions. He has observed that people who score higher on world citizenship, take international inequality less for granted and are more critical of the principles underlying border control. “World citizenship is the phenomenon that people consider themselves to be members of a kind of global society. This membership is only partially formalised because of the international human rights regime, which, in the last instance, depends on national states. In many cases it’s an informal membership, it’s a feeling, a belief, an attitude, and it exists in all parts of the world, including in low and middle income countries.”

What happens when immigration policies do not take these feelings of world citizenship into account? “We are already seeing it!” Leerkes exclaims. “Borders are becoming more violent. We are seeing that more and more states are taking pragmatic measures to try to protect their borders. This causes a lot of perverse effects, many deaths in the Mediterranean Sea, and many undesirable developments such as the practice of sextortion.”

Today, as we celebrate International Migrants Day, Leerkes reminds us that migration is part of the definition of society. “It is an element of living together, and it should not be denied, but rather be accepted.” At the same time, he does not believe that current conditions in the world allow for completely open borders. “This means that migration needs to be regulated, but it needs to happen in a fair way that includes changing world perspectives.”

This article originally appeared on the Maastricht University website.