The end of net neutrality: A threat to democracy and the SDGs?

In 2017, the United States Federal Communications Commission (FCC) announced the end of net neutrality in the USA. The decision was taken unilaterally by FCC Chairman Commissioner, Ajit Pai, and other unelected board members, without consulting key actors from civil society. This decision was and is still being criticised even from within the Commission where the vote repealing net neutrality was extremely tight: just three votes to two.

The move was also criticised by NGOs and international organisations – a fact made painfully clear at the 2018 World Summit on the Information Society (WSIS) in Geneva. During this meeting most actors agreed informally, and sometimes formally, that internet neutrality should be maintained as a key support structure for democratic and open societies. Additionally, there was a broad consensus that the FCC decision was taken without due process and may have included multiple conflicts of interests.

At this stage it is important to note that the decision to end internet neutrality only affects US data and access to the web (given the FCC’s jurisdiction). In the European Union, net neutrality is protected by law, and any change in the legislation would require consent from all Member States to authorise internet providers to discriminate between data and contents using their networks.

Ending net neutrality flies in the face of various democratic principles, leaving the less powerful without a voice and allowing internet providers to choose the content they wish to be displayed without any check and balances. Moreover, multiple Sustainable Development Goals (SDGs) may be directly or indirectly affected. ‘Privileged’ internet access or a private sector-regulated web would undermine access to quality education (#SDG4) and the basic principle of equality between individuals (#SDG10) — by granting more powers to internet providers and other powerful actors. Several tech leaders have already indicated that it would also slow down innovation (#SDG9) and even hinder the growth of independent start-ups.

Globally, there is a real need for more inclusive access to the internet and its resources, as there is a strong disparity when it comes to the geographical distribution of accessibility. Internet access for the most geographically remote populations is a crucial help for them to develop economically, assisting all of us to reach #SDG1: No Poverty. 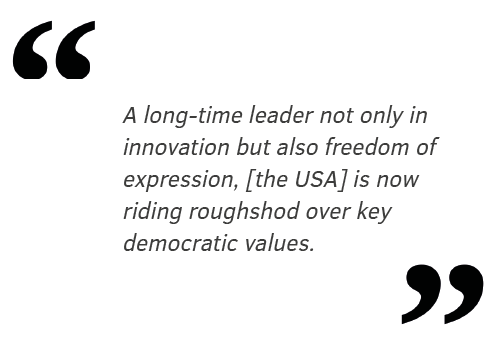 As a European citizen, it is particularly worrying to witness the current path taken by the USA. A long-time leader not only in innovation but also freedom of expression, it is now riding roughshod over key democratic values. Democracy is now being affected on a global scale by the spread of fake news and the misuse of social networks by individuals and perhaps even foreign governments, thus jeopardising democratic processes and elections. The delicate balance between free speech and fake news is one of the most sensitive – and now topical – issues in the field of internet governance. It is a huge responsibility for policymakers that may determine the future of our democracies.

UN Deputy Secretary-General Amina J. Mohammed was present at WSIS and discussed the importance of the internet as a means of communication but also as a tool for learning and knowledge sharing. She denounced the fact that so many people still do not have access to the internet and that its development towards a more inclusive internet is not happening fast enough. This “slow development is affecting especially vulnerable groups” she said, emphasising one of the goals of the UN, which is to bridge all groups of people for a more equitable distribution of knowledge and wealth. She then mentioned the need for cooperation between all ICT actors, public as much as private sectors, in light of #SDG17, Partnerships for the SDGs.

A post by MPP student Antoine Lemonnier, who attended the 2018 World Summit on the Information Society.