Thanks to my research, I’m finally empowered to speak out against menstrual stigmatisation in Nepal

by UNU-MERIT
gender equality, global health, MPP
Comments are off

A post by Riesa van Doorn, a student on our MSc. in Public Policy and Human Development

Today, on the International Day for the Elimination of Violence Against Women, let’s remind ourselves that violence against girls and women persists in every country in the world. According to the World Health Organization, gender-based violence affects one in three women in their lifetime.

Before my Master’s programme in Public Policy and Human Development, the words ‘gender-based violence’ conjured up images of sexually and physically abused wives, or of societies where women have no say at all. My thesis research journey made me realise that there are many more forms and causes of violence against women and girls than we suspect, some of which are less known. For example, few people are aware that there are places in the world where women are stigmatised – or even fear for their lives – just because they are having their period.

Nepal, my mother’s country of birth, is such a place, and I too have experienced this stigmatisation. During a family holiday, my relatives decided to visit the Tal Barahi temple in the middle of the beautiful Phewa Lake in Pokhara. I was very excited to see the lake for the first time and to take the colourful little boats to the temple, but unlucky me, my elder aunts prevented me from joining the trip. They said that I was not allowed to accompany them because I was on my period. I was confused because I had never before experienced any limitation in the Netherlands due to my period. I remember that I didn’t argue with my aunts at the time and obeyed this rule that I didn’t understand. I didn’t further question either why menstruating women could not go to the temples.

Only now, 10 years later, my research on the problem of menstrual stigmatisation in Nepal reminded me of this incident. I realised that I had been exposed to the widely accepted idea in Nepalese society that menstrual blood is impure.

In some rural communities in mid-and far-western Nepal, monthly bleedings are even life-threatening. In these remote regions, women are banished from their homes by their family members during their period, with limited access to food and water. Every month, from their first period until the start of their menopause, menstruating women are sent away to stay and sleep in filthy huts, sometimes with goats or other animals. The places lack basic facilities like a mattress, blanket, electricity, ventilation, sanitation and toilet. This ancient tradition is known as Chhaupadi, a combination of the word Chhau (untouchable and unclean) and Padi (women). 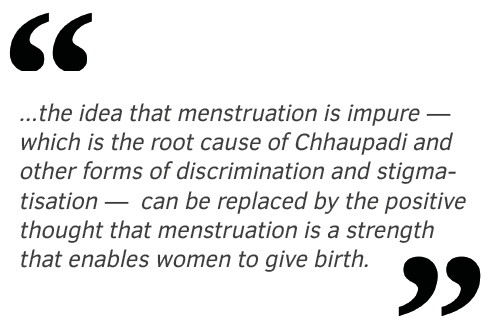 What’s more, the tradition still leads to deaths. According to news reports, women have died from snakebites or suffocation after lighting fires to keep themselves warm in the cold mud-stone Chhau sheds. To protect women from this harmful practice, the Government of Nepal issued a law banning Chhaupadi in 2017. However, families prefer to risk a jail sentence of three months or a fine of 3,000 rupees (just over 20 euros) rather than ending Chhaupadi. They believe that a menstruating woman at home will infuriate the gods and lead to misfortune not only for the woman’s family but for the entire community.

When I started researching the topic for my thesis, I found that teenage girls and young women who have access to education dislike the tradition of Chhaupadi, and some even question it. However, they don’t raise their voices against their grandmothers and mothers, who continue to insist on the practice. Just like me, when I was 15, the young women do as they are told. They find it extremely difficult to openly reject a practice followed by every woman in their community. They share the fear that a woman who fights Chhaupadi will be banished from her home or the community.

I decided to investigate how education — a commonly used strategy to change social behaviour — could change attitudes surrounding Chhaupadi among respected opinion leaders. To answer this question, I contacted several NGOs and interviewed 13 experts and activists, both foreign and Nepali.  I learned that in Chhaupadi communities, young women and girls have the least capacity to break with tradition. Those who have the most power to bring change are religious leaders, grandmothers, mothers, fathers and brothers. Rather than using their influence to maintain the tradition, community leaders, or opinion leaders in the language of public policy, should use the same authority to persuade women and others to abandon the practice. Before they can take on this role, however, they too need to change their attitudes towards the tradition of Chhaupadi.

One of my key findings was that it’s crucial for opinion leaders to learn and understand that menstruation is a natural biological process related to the female reproductive system. Through the use of pictures, for example, the idea that menstruation is impure — which is the root cause of Chhaupadi and other forms of discrimination and stigmatisation — can be replaced by the positive thought that menstruation is a strength that enables women to give birth. Another key finding was that change is less likely to happen if NGOs only make temporary stays in Chhaupadi communities; indeed, I found that NGO activities usually last only a week. I argued in my thesis that this time constraint did not allow community members to understand and assimilate the new knowledge on menstruation well enough to spread it further and continue the dialogue among the community after the departure of the NGOs.

I am determined to pursue my fight to end the stigma against menstruation. When Covid-19 travel restrictions ease, I want to visit Chhaupadi communities in Nepal. During my trip, I may find myself in the same situation as when I was 15. This time, however, if my aunts tell me that I cannot partake in an activity because of my period, I will react differently. I will not accept this discrimination, and I will stand up for myself. I will respectfully disobey my family’s wish and start a dialogue on menstruation instead. In case I witness another adolescent girl being shunned from an activity, I will speak up too. One day, I hope that Nepalese society will accept female menstruation as a natural phenomenon and that all Nepalese women will be able to fully participate in family activities, no matter what time of the month.

See my full thesis below or download it here.