Social innovation: How to shift up and over to a new economy?

by UNU-MERIT
economics, entrepreneurship, social innovation, sustainability
Comments are off 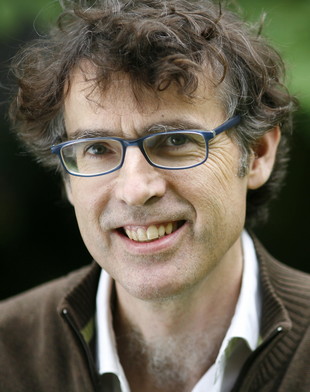 Strangers who share one car. A network around a drug addicted youth who offer care themselves, under the guidance of a professional. A person paying back an hour of painting window frames with an hour of working in someone else’s garden. These are all examples of a more social economy, which is growing slowly but surely, also in the Netherlands. At Maastricht University, Prof. René Kemp is studying how this transition from an old to a new economy is taking shape worldwide.

Working together to do things differently than normal is also called ‘social innovation’. In cities around the world, these activities are being bundled into so-called ‘city labs’. In Maastricht, for example, there is the Maastricht LAB, which focuses mainly on urban development and the opportunities offered by large vacant buildings for creative initiatives. The city lab in Antwerp focuses on renewable energy. These two and three other city labs are the subject of scientific research that is coordinated by Maastricht University.

René Kemp: “In the Urb@Exp project, which is funded by the European Union, we’re investigating how to best shape this type of city lab and what it’s good for. Politicians and other initiators often struggle with that. For example, do you have to place it organisationally within a municipality, or do it with other parties?” The researchers want to make the knowledge they acquire expressly beneficial to practice. “Scientific research often ends with a number of scientific articles and a final report, and mostly the scientists have learned something. We found it more appropriate to attractively bundle the knowledge we gathered into a ‘lab kit’.” Municipalities or other agencies who want to set up a city lab can order the kit and get started.

One of the pitfalls against which the kit warns, for example, is focusing only on the enthusiastic, creative people and having too little regard for the city lab’s environment or for the fellow citizens who are less wealthy. For Kemp, social innovation is mainly about the humanisation of the economy. “In the current economy, the workload is huge, there’s little job security, the collegial feel isn’t what it used to be because you have to compete with your colleagues for work. That all undermines the sense of solidarity with one another. Because of this, society is becoming more individualised. And many people do work that they don’t think is worth it at all. I think that’s a big problem, even though ‘the Dutch economy is doing well’.”

Another problem is that people who cannot participate in the current economy for some reason are left out in the cold. The Maastricht project ‘The Masters’ is a good example of how young people who are ‘differently developed’ are being paid for doing odd jobs for people in the neighbourhood and are able to participate in society this way. This is organised around the idea that everyone can do something. It is important that the three basic needs of people are met: autonomy (based on internal motivations), social commitment, and the ability to develop and put your competencies to use by doing work that you like and want to do. 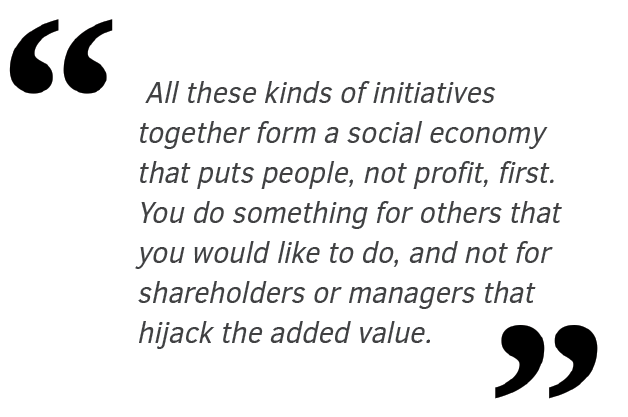 Kemp: “Social innovation involves renewal on the one hand, but on the other hand it often has elements of the past. Young people who learn from an experienced professional—that’s what they used to do before. Exchanging services without any money changing hands also used to occur. But whereas social ties were limiting in the past, the starting point now is more about what people can and want to contribute to society and to each other. If that’s done with an earnings model, you have a social enterprise that is stable. All these kinds of initiatives together form a social economy that puts people, not profit, first. You do something for others that you would like to do, and not for shareholders or managers that hijack the added value. The added value is also different—it’s more responsible and meaningful to you and to society.”

Switching to a more social economy requires a transition process. It is about building something new and weaning from the existing one. The first is easier than the second, because that is about money, important positions and interests. Educated as an economist, Kemp himself transitioned to become a social scientist, or more specifically an ‘innovation researcher’. A lab for social innovation is not about experiments with chemical substances and reactions, but about people who experiment with new methods and practices. Kemp believes in research that is close to practice: “In the concrete nature of practice, global problems become clear. You better understand the difficulties and possibilities.”

René Kemp is very enthusiastic about a more social economy. “In the economy, but also in our social welfare system, there is a lot of inhumanity.” By which he is referring to, among other things, the exclusion of those who are ‘differently developed’, requiring people who cannot get a job to apply anyway to receive welfare benefits, and the healthcare system that is sometimes more about protocol and minutes than people. “I especially see abroad that there’s a need for another economy. In the Netherlands, we’re generally well trained and most people get by okay, but in Greece it’s a different story. And there, like in the UK, you see a lot of social innovation initiatives. Timebanks, which allow people to perform services on the basis of hours worked (time credits), flourish there. Everyone can participate because everyone can do something. It’s also suitable for reintegration. If you take a good look, you’ll see that something is changing, but it’s happening slowly.”

Creative types and entrepreneurs are also increasingly involved in this, together with the long-standing civil society organisations, action groups, associations and foundations. “They’re turning the tide toward another economy and society that I believe we need”, says Kemp. “In the end, we all want to do meaningful things with others. Sartre said, ‘Hell is other people’, but the Belgian psychiatrist Dirk de Wachter rightly says, ‘Hell, that’s nothing to belong to or nothing to care about’.”

Prof. René Kemp (1961) is professor of Innovation and Sustainable Development at the Maastricht International Centre for Integrated assessment and Sustainable development (ICIS) and is affiliated with UNU-MERIT. He is one of Europe’s leading experts in sustainability transitions. For Maastricht University, he leads two major research projects on social innovation: Urb@Exp and Transit.

This interview originally appeared on the Maastricht University website. Read the original article.