by UNU-MERIT
Africa, Director, UN
Comments are off 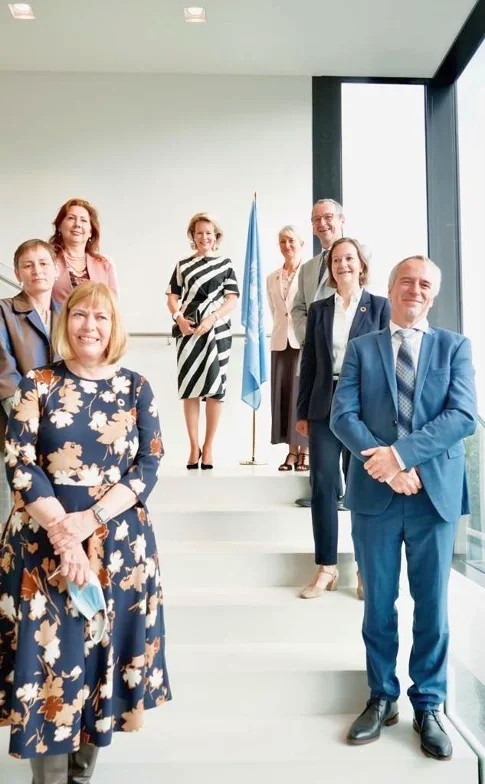 Her Majesty Queen Mathilde of the Belgians paid an in-person visit to UN House in Brussels, the headquarters of several agencies, funds, and programmes of the United Nations in the Belgian capital, as well as a virtual visit to the UN in Liberia, on 23 September 2021.

During her meeting with representatives from UN organisations in Brussels, Her Majesty discussed the main priorities of the UN, and in particular the implementation of the Sustainable Development Goals (SDGs). It was Her Majesty’s first visit to UN House, as well as her first ever virtual field trip.

Her Majesty was recently reconfirmed by UN Secretary-General António Guterres as an SDG Advocate, a role she has held since 2016, and for which she focuses in particular on mental health. She planned her visit to coincide with the 76th Session of the UN General Assembly (UNGA 76) in New York, and discussed issues on the agenda of UNGA 76 with the Heads of UN Agencies in Brussels.

“We want to thank Her Majesty the Queen for her outstanding support to the SDGs, which are key to protect our people and planet and build a fairer and greener future,” said Camilla Brückner, Director of the UN/UNDP Office in Brussels on the occasion of Her Majesty’s visit. “Her role as an SDG Advocate is more important than ever. With less than 10 years separating us from 2030, and with the COVID-19 crisis worsening existing inequalities, achieving the SDGs is the utmost priority of our time,” she added.

Virtual visit to Liberia after 11 years

Her Majesty also conducted a virtual visit to the UN Office in Monrovia, Liberia, to witness the work of the UN on the ground. In 2010, she visited Liberia in her capacity as UNICEF and UNAIDS Special Representative. “It is an honour for the UN Country Team in Liberia to receive Her Majesty Queen of the Belgians to Liberia 11 years after her previous visit,” said UN Resident Coordinator in Liberia Niels Scott. “This is a great opportunity to see what has changed, the remaining challenges and how we can work together to address them. With a focus on youth, we would like to convey a message of not only challenges but one of hope for the future.”

“My dream is to go to school”

Liberia has one of the youngest populations in the world, with approximately 63% below the age of 25. Liberian youth are the country’s hope for recovery after the civil war, but many are still impacted by its long-term effects. The country has a high adolescent pregnancy rate. One in three girls between 10 and 19 falls pregnant, according to UNICEF. During the virtual visit, Her Majesty heard how one woman had become a grandmother at the age of 26, underlining the progress needed.

“Having a child at a very young age in Liberia is not an easy thing. It is painful because it makes you drop out of school (…) and stops you from achieving your goals,” 18-year-old mother Grace Barnard from Montserrado County told the UN office in Liberia. “I’m hoping that after I graduate, I will get a job and be able to sustain my child and myself.”

Mental health is another key issue, and it is estimated that one out of five Liberians experiences mild or moderate mental health issues. “My mental illness started in Guinea, as a refugee. It has affected my life greatly,” explained Benjamin Ballah from Montserrado County, whose mental health issues delayed him from graduating from the University of Liberia. “Through the United Nations Agencies in Liberia, we have been able to train in a lot of areas. My dream is to see people living with psychosocial disability living on an equal basis with other people.”

Over the years, the UN has supported the government and people of Liberia to reduce teenage pregnancies, reduce substance use among young people, empower adolescents, and ensure the social inclusion of people with mental health issues. With collective UN support, Liberia has been able to reduce maternal mortality and teenage pregnancy rates, empower disadvantaged young people, and provide hope to people with mental health issues.

For Yacoub El Hillo, Regional Director ad interim for Africa of the UN’s Development Coordination Office, the rise in mental health issues, adolescent pregnancies, and child marriages is not just an issue in Liberia, but across the continent more widely. “The underlying problems with our essential healthcare stem from inequality, underfunding, complacency, and neglect. By addressing these fundamental issues and bolstering primary health care systems and universal health coverage, the countries will grow faster and recover more quickly from the COVID-19 pandemic,” he told the virtual briefing. This article first appeared on the UNRIC website. Read the original article.