by UNU-MERIT
Director, Maastricht University, UN
Comments are off 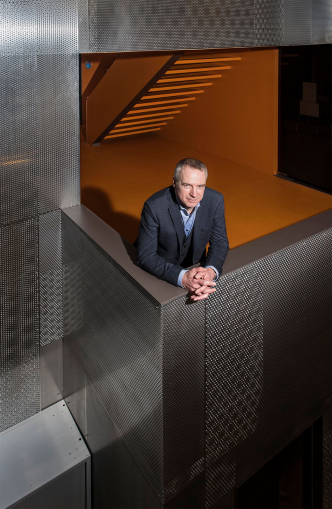 He is a free spirit. “As a child I was always wandering around outside, building huts, counting stars.” He is self-deprecating: “I was interviewed for my PhD by a committee of old white men, a bit like myself now,” but also self-aware: “I consciously moved away from fundamental mathematics after my PhD.” As a leader, his main goal is to serve others. “You don’t shake hands with an institute, but with the people who work there. First and foremost I want to look at what everybody needs.” Bartel Van de Walle has been director of UNU-MERIT since September 2020.

Starting a new job during the corona crisis really makes you think, he says as we begin the interview. “In an academic career spanning 20 years, you’ve acquired quite a few skills that you think you can use in a new job like this. But that was all in an offline setting, in person; at meetings, workshops, seminars. Suddenly all that’s of no use. There’s nothing more informative in a new job than a chat at the coffee machine.”

It was clear to him from a young age that he would pursue an academic career—the first in his family to do so. During his studies in maths and computer science in Ghent, there was ample opportunity for “self-development,” he grins. “I could study hard when it was needed, but I also had a lot of time for other things.” His favourite side activity: the astronomy club that he founded. He also wrote his master’s thesis on astronomy. “It’s kind of a missed calling, or maybe a childhood trauma,” he laughs. “I wanted to study astronomy in Amsterdam, but I was 17, and my parents thought that was too far away from Bruges.”

After graduating from Ghent, he quickly found a PhD position at SCK•CEN, the renowned nuclear research centre in Mol, Belgium. He saw the university as a place where people could think critically. “I always dreaded ending up in a company where I’d be one of many having to do this or that to improve the business. For the same reason, I didn’t want to join the army. Instead I opted for civilian service: I’d rather think for myself.” He obtained his PhD among an inspiring group of mathematicians. “They were brilliant; I learnt so much there.” His dissertation focused on choices that are not binary (a or b; “right or wrong”), but vague or fuzzy (“better or worse”), which he expressed in mathematical language. “The beauty of mathematics can still move me. Formulating something elegantly and seeing that it’s right!”

He was still keen to go abroad, and in 2000 he moved to the New Jersey Institute of Technology in the US, where he had previously spent 10 months working with a grant. His then wife and two young children joined him. The research revolved around group decisions and was relatively theoretical in nature. After the attacks on the Twin Towers, Van de Walle realised he “wanted to do something in the real world.” “Maths is not the real world, no,” he laughs. “It’s different. In maths you make a lot of abstractions: you build your model on the basis of assumptions that are often very fundamental. Practice is always much more complex.”

He began studying how people make decisions under pressure. Why were the police officers in the collapsing Twin Towers warned to evacuate on time, while the firefighters were not, resulting in many casualties? “I investigated what went wrong in terms of communication. That shows you where mistakes were made, but I think it’s important to emphasise that human error often occurs when there’s something wrong with the system. Sometimes it’s too easy to blame a person. I believe in analysing the system and finding the weaknesses that give rise to mistakes.” 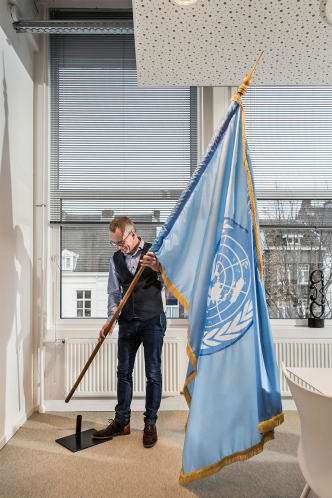 Another lesson he learnt in the US: “to think big and reach for the stars.” “With the ‘pursuit of happiness’ inscribed in the constitution, people more readily dare to dream and to follow those dreams. If something is a good idea, Americans focus on how to make it happen—not all the things that could go wrong.” Still, the family was keen to return to Europe, especially when the mood shifted after 9/11. “I had the choice between Ghent or Tilburg. I already knew Ghent, so Tilburg it was.”

His research developed in the direction of humanitarian aid. How can the available information be put to more effective use? “I also did fieldwork in places like the Congo and the Gaza Strip. I slept in very basic places, flew in small, rickety planes. A wonderful period, which was over before I knew it.”

He is very concerned about the developments in the academic world in recent decades. “The term ‘excellence’ is very limited these days. What’s excellent about a Nature publication that changes nothing in the real world? We’re driving ourselves crazy, not least with the competition for research funding. It’s at the expense of research time, at the expense of those academics who run into a wall, and at the expense of free research that doesn’t yet have a practical application. Fortunately, it’s increasingly up for debate.”

If he had to start his academic career over—like his eldest son, who recently started his PhD—he is unsure whether he would make the same choice. “I don’t envy young people in academia, with the hyper-competitive system of applying for grants at the same time as starting a family. In hindsight, I sacrificed a lot for my career. I missed a lot of my first three children’s younger years. I’m trying more consciously to make time for my youngest, who’s now four.”

At Harvard, where he worked as a senior scholar for six months before moving to Delft, money was never an issue for researchers. “I had a great time there, for that and other reasons. At the same time, I’m annoyed by the glorification of the top universities. They’re just not comparable to others. In Europe, we need to profile ourselves differently; for example, by giving opportunities to students from less wealthy countries. I see that as an obligation of this institute.” The idea behind UNU-MERIT’s PhD programme is that alumni put their knowledge to good use in their home countries afterwards. “But often they’d prefer to stay here, and so far we don’t really have a good answer for that. I’d like to explore the possibility of supporting PhD candidates in their home countries.”

Van de Walle himself never felt the urge to return to Belgium. “I like the Dutch academic system. Undoubtedly things are different now, but when I left Belgium 30 years ago it was a very closed system, with a lot of favouritism. Narrow-minded, even. I like the Dutch directness. The Dutch are fairly self-aware, but also open and warm, if you ask me. It’s only the food that I’ll never get used to, although maybe it’s better in this region. Those bitterballen—my god, guys … ”

In Europe, we need to profile ourselves differently; for example, by giving opportunities to students from less wealthy countries. I see that as an obligation of this institute.

This article first appeared on the Maastricht University website. Read the original article.