by UNU-MERIT
health, migration, water
Comments are off 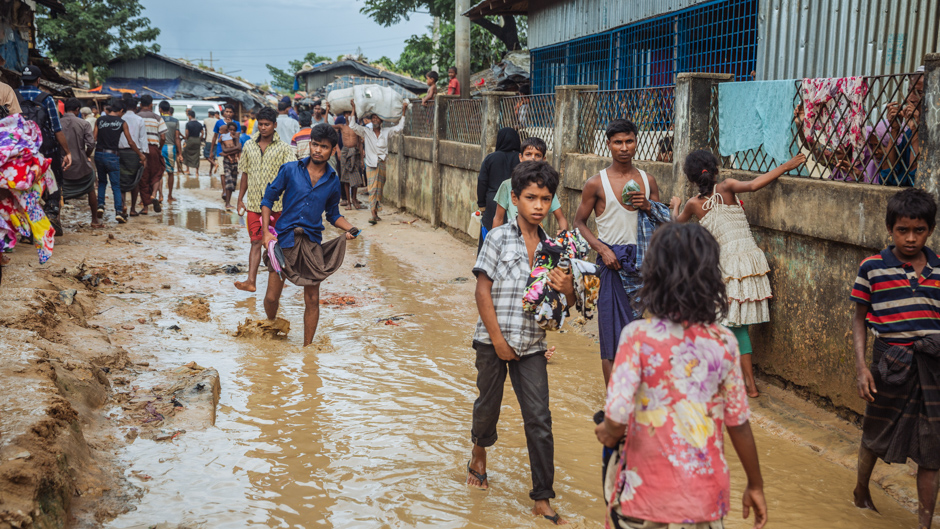 A joint post by Praem Mehta and Katie Kuschminder

The human rights violations and targeted violence against Rohingya communities in Rakhine State, Myanmar have forced over 687,000 people to flee to Bangladesh since 25 August 2017. As of 30 March 2018 there are now more than 898,000 Rohingya refugees living in overcrowded, inadequate camp conditions in Cox’s Bazar. The crisis is thus far from over.

With the monsoon season imminent, heavy rains and flooding will increase the vulnerability of camp residents, elevate risks of water-borne disease outbreaks such as cholera, and threaten already precarious water, sanitation and hygiene (WASH) infrastructure and services. According to an assessment by UNHCR, the monsoon will put 203,000 people in Kutupalong camp in danger. Monsoon preparation is progressing daily, but much more needs to be done to secure the safety and health of refugees.

Bangladesh has long been plagued with issues of water quantity (i.e., too much or too little) and water quality (i.e., arsenic contamination). But with the influx of the Rohingya refugee population, water resources and sanitation services are under immense strain. A report from UNICEF and partners in February stated that 312,691 individuals are still in need of WASH support, while the World Health Organization estimated that 62% of household water is contaminated in the refugee camps. This contamination is likely caused by wells that are too shallow (less than 40 metres deep) and situated too close to latrines (and therefore possibly contaminated with E.coli), as well as unsanitary water-handling habits such as the use of dirty containers, and poor hygiene habits.

Overcrowding in camps, and especially in unplanned settlements, has led to situations such as that in Leda, where in November 2017, there was only one latrine per 47 people — well below the minimum Sphere humanitarian standard of one latrine per 20 people. Also of importance is the latrine accessibility for women and persons with disabilities. Due to a lack of segregated latrines, there is no privacy for women and girls. As a result, they are restricting their food and water intake, and fearing for their safety. There is also a lack of access to sanitary wear, which affects their health.

An International Organization for Migration (IOM) WASH specialist stated his concern that “most of the temporary pit latrines are full…becoming unusable and a danger to communities living nearby”. A recent report estimates that “50,000 latrines need to be constructed or maintained” because despite the construction of numerous temporary emergency latrines, they are filling faster than they are being constructed. 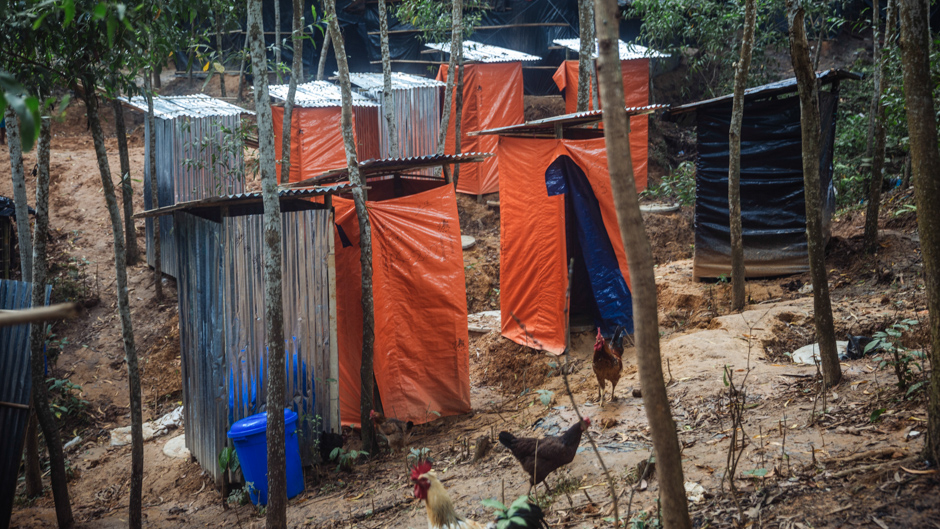 As more refugees have arrived into the camps, many latrines have been set up hastily with little consideration for placement and how they might be affected by heavy monsoon rains. Photo: © International Organization for Migration/Muse Mohammed

Technologies to efficiently and safely treat sludge and wastewater are urgently needed. A February 2018 situation report from UNICEF states that 24 faecal sludge management sites have been constructed and the amount of sludge being collected and treated continues to increase. Furthermore, a WASH sector strategy for March–December 2018 discusses the options for sludge treatment. The report recognises that while the initial strategy was the emergency provision of water and latrines, poor waste management is hampering those efforts and therefore needs to be rectified.

The primary source of water for the majority of refugees is tube wells, with one report estimating that almost 20% of tube wells were not operational and the WASH sector strategy for March-December 2018 stating that “up to 70% of water samples from tube-wells are showing some faecal contamination”. In Unchiparang camp, for example, there was only one well per 57 people. At present, the daily minimum water requirement in some areas is about 500 cubic meters per day, while the requirement for all refugees and host communities is over 16 million litres of clean water per day.

Averting a flood of new problems

Compounding the issue of access to clean water is the fast approaching monsoon season in Bangladesh. Heavy rains and landslides could wreak havoc with many existing latrines and tube wells, sweeping them into creeks where residents do laundry and children play, flooding latrines, and washing sewage into drinking water supplies, raising the threat of disease outbreaks.

More suitable wells (in terms of depth and location) are urgently needed to ensure that water scarcity does not add to the numerous challenges already affecting this vulnerable population. These actions should also not be undertaken without considering the longer-term implications and sustainability of these solutions. For example, IOM, the Japan International Cooperation Agency (JICA) and Bangladesh’s Department of Public Health Engineering, launched a project in early April 2018 to construct a deep groundwater production well, which will then be used to implement a safe water supply network for 30,000–40,000 people. 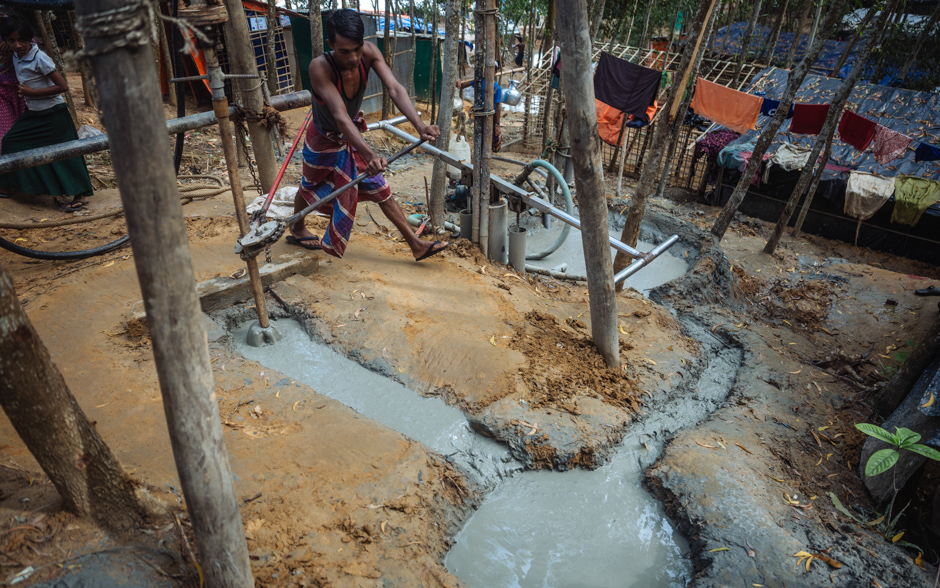 Alternative approaches to providing water, including trucking it into the camps, are already underway. According to Médecins Sans Frontières, as of November 2017, they trucked an average of 55m3 of water per day to the settlements. The Department of Public Health Engineering in Bangladesh, also supplies trucked water by “providing more than 60,000 litres of water in Ukhia and Teknaf through six mobile water carrying trucks and 14 surface water treatment plants supported by UNICEF”.

Access to WASH is already a high priority for several agencies on the ground. Despite these efforts, the existing water supply may still be exhausted. The current camps are crowded, so new arrivals end up creating spontaneous settlements, without access to aid programmes or access to clean water and sanitation, which “can only be delivered in a structured environment”. These people are therefore drinking untreated water and defecating in the open, which increases the risk of disease outbreak.

Access to safe water is needed for daily tasks. While building shallow and deep tube wells will increase water availability, additional measures are also needed such as increasing the number of water purification tablets (and instructions on use) that are distributed to households. Moreover, water that is already treated and clean is needed to ensure the success of interventions like immunisation against water-borne diseases (e.g., cholera) and promotion of good hygiene practices.

Many key elements of monsoon season response are in place or in progress. The World Health Organization has developed an Early Warning, Alert and Response System (EWARS) to detect and respond to the outbreak of epidemic-prone diseases, and they have deployed an environmental health team to Cox’s Bazar to assess and monitor drinking water, while also supporting the enhancement of WASH, especially in health facilities. Additionally, in areas where acute watery diarrhoea or early signs of a disease outbreak are found, household water treatment is being scaled up.

But in addition to EWARS and continuing WASH efforts, three steps can be taken to improve the situation:

First, it is essential to ensure access to safe water. Water is being trucked into the camps, but the supply is far too short to meet demand. Although this is a temporary solution, it is vital to increase the amount of water being trucked in for the immediate demand. In Zaatari refugee camp in Jordan, home to approximately 80,000 refugees, 100,000,000 litres of water are trucked in daily. A central challenge of trucking in water is ensuring water quality. This is more difficult for trucking operations because humanitarian agencies usually outsource the delivery trucks. In this process, the water source and treatment of water may get overlooked. Therefore, point-of-access water testing should be expanded to ensure that people are collecting safe drinking water. Additionally, jerry cans or other clean water collection instruments should be distributed to the population in an effort to promote good hygiene. 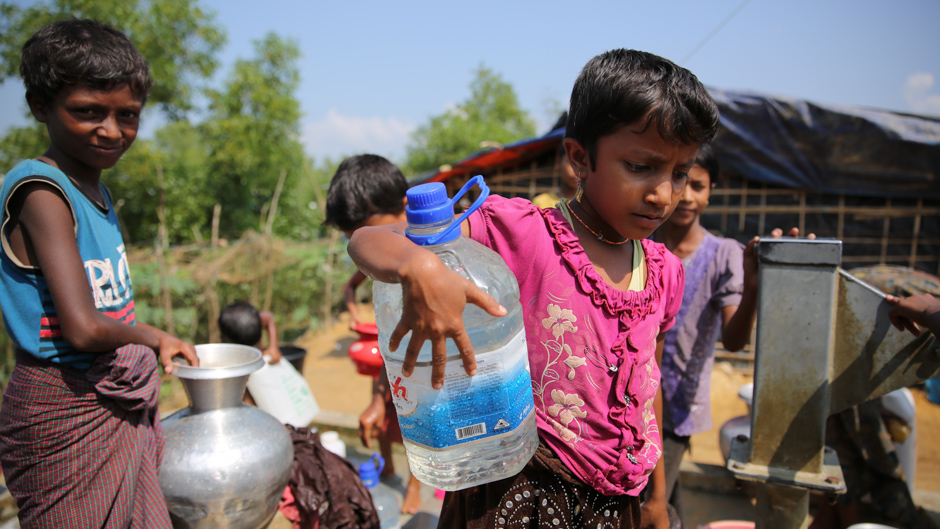 Second, an effective sanitation strategy is vital. Pit latrines are the most common form of sanitation in refugee camps, but, as mentioned, they are quickly being filled in Bangladesh due to short supply and overcrowding. Without removal or treatment of waste, the pit latrines overflow and contaminate soil and groundwater. A possible resolution would be an innovative sanitation strategy developed and tested in Kakuma refugee camp (Kenya) that “incorporates urine-diverting toilets, which separate urine and faecal waste, and a service-based sanitation system that included weekly waste collection”. This system produced promising results and was preferred by refugees.

A central component of the Kakuma system was waste removal. In addition to developing context-specific technologies to address sludge management in Cox’s Bazar, a potential solution would be for aid agencies to collaborate with local faecal sludge management entrepreneurs to collect the waste and safely dispose of/treat it. These local-level collaborations benefit the refugee community by providing them with safely managed sanitation that will prevent disease, and benefits the receiving country population by supporting local business. Moreover, the system is more likely to be sustainable if a local entity is involved in the process.

Finally, despite the January announcement of a Rohingya repatriation agreement between Bangladesh and Myanmar, a long-term WASH strategy must be adopted for refugees residing in Bangladesh. The construction of wells and boreholes, and supply of bladder tanks for water storage are already underway. However, adopting innovations that have been created for humanitarian contexts, such as household water testing kits, should be incorporated into the humanitarian response, while distribution of hygiene kits should be expanded. Also, efforts to educate refugees in camps regarding water conservation, pollution, and sanitation and hygiene practices should be increased. These initiatives have proven vital in other camp contexts such as Zaatari in Jordan.

It is clear that the needs for water and sanitation are vast for Rohingya refugees in Bangladesh and the monsoon season will only exacerbate the challenges. Providing a combination of emergency solutions, such as trucking in clean water, should be balanced with long-term sustainable solutions. Adequate planning of holistic and innovative technical solutions for WASH are fundamental to reducing public health risks.

This article was originally posted on Our World magazine.