Once a destination for migrants, post-Gaddafi Libya has gone from transit route to containment

by Katie Kuschminder
Africa, migration, policy
Comments are off

Amid profound instability unleashed with the Libyan civil war and rival factions vying for power, conditions facing the roughly 650,000 migrants who remain in Libya have been dire. Those living in the community are vulnerable to extortion, violence, and slave-like work conditions, while migrants held in detention centres may experience overcrowding, sexual abuse, forced labour, torture, and deprivation of food, sunlight, and water. Amid entrenched fighting around Tripoli, including a deadly airstrike in 2019 that hit a migrant detention centre, thousands of migrants have been evacuated from the country.

The experience of one Nigerian woman interviewed by the author in Italy, after a journey across the Mediterranean that has proven so dangerous for countless people, offers a sketch in brief of how the situation for migrants has changed significantly in Libya. Drawn to Libya by the prospect of better work and pay, the woman’s thinking changed after witnessing a shooting. “Blood was pumping out… I was hiding there, looking; there was nobody to rescue the boy and that is how the boy just lost his life,” the migrant recounted in 2017. “The next thing I need[ed] to do is just for me to secure myself. I didn’t go home; I was hiding. I was praying within me, to tell God to come and help me.” After this experience, the woman believed she would not be safe in Libya and worked to pay her passage to Italy.

Others have not been so fortunate, finding themselves stuck in limbo. The International Organization for Migration (IOM) estimated in 2018 that 600,000 migrants in Libya could be victims of abuse and human rights violations. This year, IOM reported that 71 per cent of migrants in Libya claimed to have limited or no access to health services, an especially concerning statistic amid the COVID-19 pandemic. The public-health crisis has added new pressure to the situation; migrants and refugees have reported losing their jobs and seeing food prices spike due, in part, to supply chain disruptions sparked by the outbreak.

Drawing on interviews the author conducted with Eritreans and Nigerians who had migrated through Libya, this article explains how conditions have changed for migrants in the post-Gaddafi era. In effect, there have been two stages: a state of transit from 2011 to late 2017, followed by a state of containment following the late 2017 implementation of a deal with Italy for the Libyan coast guard to thwart migrant boats from reaching European waters. This agreement was renewed in February 2020, offering a moment to reconsider its effect on migrants’ experiences.

Libya since the downfall of Gaddafi

Prior to the death of Gaddafi in October 2011, Libya was a prime destination for migrants within Africa. The country’s oil wealth propelled a strong economy and plentiful jobs. Yet that fell apart when Gaddafi was deposed. According to IOM, there were approximately 2.5 million migrant workers in Libya before the conflict started, but 800,000 fled during 2011, leaving vacancies throughout important sectors such as health and construction.

Some Nigerians interviewed by the author had worked in Libya for several years. Abu owned a clothing shop in Tripoli and lived there for seven years until the civil war began (his name and those of others interviewed in this article are pseudonyms). He went back to Nigeria for a time and then returned to his shop once the conflict appeared to settle. Meanwhile, the situation in Nigeria appeared to be worsening, so his wife and two children followed his path and joined him in Libya.

Their perceived security was not to last, however. In the power vacuum after Gaddafi’s death, different tribal regimes and authority groups competed violently to gain control. For individuals caught in the middle, the situation changed rapidly. “Last year I was living a normal life,” Abu told the author during an interview in Italy, where he fled in 2016. “I didn’t have any problems and the place was peaceful.” Things turned after the Islamic State spread from its origins in Iraq and Syria into Libya. “They came there and took over,” he said. “There was a lot of crisis over there. Even my first daughter, a bullet met her and she died there.”

As with countless other migrants caught amid the civil war, Abu and his family found their only escape route seemed to be via the sea, with the desert behind them and no way to return home.

The increased violence in Libya has made the situation far more dangerous for migrants and locals. An estimated 401,000 people were displaced within the country as of April, according to IOM. As of mid-2020, two authorities continued to vie for power in Libya: the UN-supported Government of National Accord (GNA) based in Tripoli and politicians in the east aligned with Khalifa Haftar’s Libyan National Army. Neither has consolidated central control, though support from Turkey has aided the GNA in repelling an advance on Tripoli in recent months. Instead, much of the country has been ruled by tribal regimes (see Figure 1). In some parts of the country, tribal rule has been consistent since the fall of Gaddafi, whereas in other territories it has been contested between different groups over time.

In the southeast, for example, the Toubou ethnic group gained control after the fall of Gaddafi and has maintained consistent authority over its territory. The Toubou control large swaths of people, money, and goods coming in and out of their territory. As a result, the Toubou have built a business kidnapping and extorting Eritrean and East African migrants entering their territory. 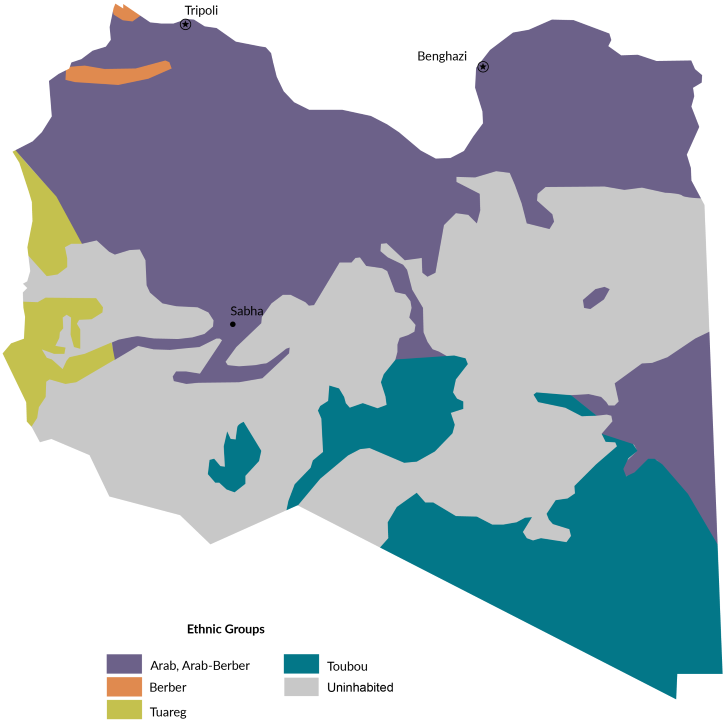 In the southwest, on the other hand, there has been more contestation of control between rival tribal groups. Since Gaddafi’s overthrow, the Toubou and Tuareg groups have challenged each other overland. This part of Libya is the central entry point for migrants arriving from West Africa and has become the main source of reports about slave markets and trading of human beings.

With the fall of Gaddafi, migration through Libya increased due to the lack of controls. Onward migration from Libya had previously been controlled by Gaddafi’s regime. Post-Gaddafi, the trade and extortion of human beings became a central source of income for communities in Libya, often to the migrants’ detriment.

The experiences of migrants in Libya have changed dramatically in the post-Gaddafi years, as the 2017 Italy agreement transformed the country from one of transition to one of containment. Even within these different periods, however, migrants have encountered different situations depending on which region they traverse. The absence of a central rule of law has created multiple transit spaces of exception that are beyond the reach of international law, and so operate under rules all their own.

What has remained nearly constant is the rampant human rights violations against migrants in Libya. These violations have been documented in high-profile media pieces such as CNN’s footage of the Libyan slave trade and Sally Hayden’s exposé in Foreign Policy. Research by the author and Anna Triandafyllidou shows that the systematic kidnapping and extortion of Eritrean migrants in the Toubou territory amount to crimes against humanity. As such, the international community could consider invoking the doctrine of responsibility to protect to intervene in Libya, per international law.

The situation continues to be critical for migrants. The recent renewal of the Italy-Libya agreement must not be allowed to prolong what has already been a dreadfully extended period of migrant abuse and neglect. While the deal has been highly effective at reducing arrivals to Europe, it has not changed the aspirations of migrants to reach Europe and has clearly worsened their situation in Libya. As the author stated in a 2017 critique of the initial deal, a functioning asylum or judicial system for protecting migrants in Libya is unrealistic without rule of law. There is increasing evidence that after being intercepted at sea, migrants and refugees are often brought to Libyan detention centres where they suffer human rights abuses and are neglected. Migrant advocates’ concerns about the deal appear to have been proven correct.

A longer version of this article originally appeared on the website of the Migration Policy Institute. Read the full original article.