Mygration Story: ‘The PhD was as much adventure as research’

by Ronald Skeldon
Americas, Asia, migration
Comments are off 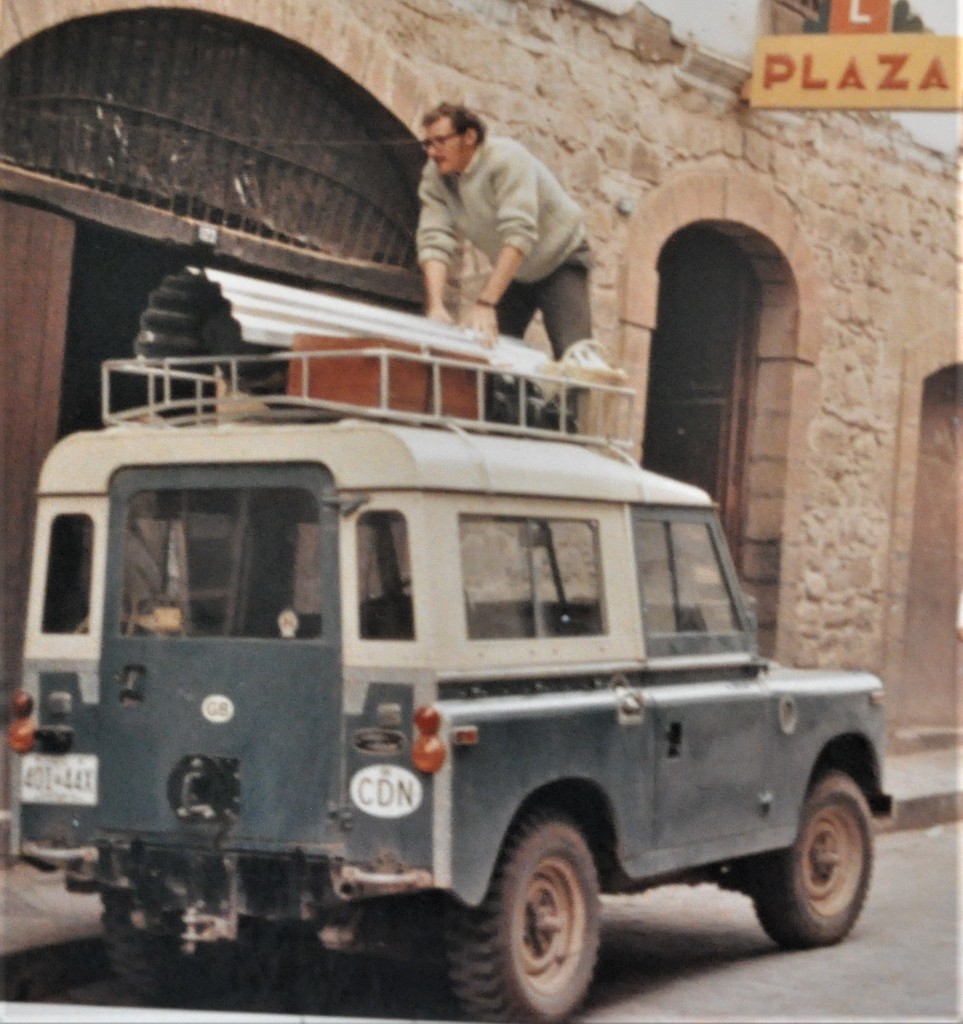 An enduring goal of Migration Studies is to explain why people migrate: why some move and others do not. The reasons to explain the migration of an individual are going to be different from those to explain an aggregate flow of many hundreds, if not thousands, of people. No individual is totally isolated from the broader context of the group within which he or she lives and moves.

The most obvious reason is to move to join a family member, for example, but the broader question remains whether some groups, some cultures, are more migratory than others – and the Scots, from a marginal position on the periphery of Europe, have a tradition of migration that goes back centuries. How much weight can be given to this tradition in any explanation of the movement of an individual is not at all clear, not even to that individual himself, but I have always been conscious of that tradition of migration, even though it remained in the shadows, rather than accounting for any of the migrations I have made.

I was born and grew up in the East End of the City of Glasgow at the end of the Second World War, a city then undergoing a profound transformation from the “second city of empire” based on heavy industry to a much-reduced city based upon light industry in a post-colonial state. At school, I had the opportunity to spend weekends outside the city, walking in the hills or sailing the lochs, as well as going on school trips in the summer to Greece, Switzerland and Italy.

A tradition much stronger than migration among Scots is the drive for self-improvement through education and I was lucky to be accepted by the local university to study geography, as one of the first in my neighbourhood to attend university. In my final year, and after 20 years in a city that had yet to reinvent itself, I decided that it was time to leave Glasgow and a critical factor became the fliers on the noticeboard in the foyer of the Department of Geography from universities in Canada. I was accepted by the University of Toronto and despite Canada being a major destination of the Scottish diaspora, no personal linkages impacted upon that choice, just the institutional and reputational links among universities. In terms of theories of migration, the opportunity to improve capabilities drove my aspiration to move.

Toronto proved a serendipitous but inspirational choice and I began Latin American studies that were to last seven years, with considerable time spent in Mexico and then in the Andean region of Peru. Opportunities for graduate students in an expanding tertiary sector in Canada allowed the pursuit and funding of an MA and then the PhD. 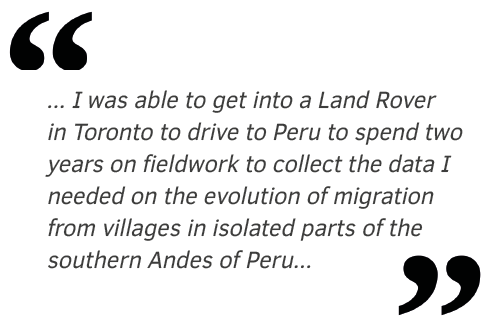 Health and safety, let alone ethical issues, were of a different order to where they are today, and I was able to get into a Land Rover in Toronto to drive to Peru to spend two years on fieldwork to collect the data I needed on the evolution of migration from villages in isolated parts of the southern Andes of Peru. There was no email in those days, just the occasional letter, and I was very much on my own. The PhD was as much adventure as research, during which time I met a young English woman who lived and worked in New York and who later returned to accompany me for most of the long return journey north to Canada. She was to become my life partner through all subsequent migrations. Just before leaving Peru, I gave a seminar at one of their research institutes after which I was offered a job to take up on completion of the PhD.

Back in Toronto, news came of political changes in Peru that seemed to scupper any prospects for a job there and a fellow graduate student pushed a tiny advertisement across the coffee-room table with the words “You like these kinds of places”. It was for a job with the Australian National University in their New Guinea Research Unit. After a quick visit to Montreal to meet a former director of the Unit, I applied and was offered the post just at the same time as confirmation of the position in Peru came through. I postponed the position in New Guinea for a year and went back to Peru to support their research on the impact of agrarian reform on migration before heading east to Australia and Papua New Guinea, where we were to spend four and a half years, including a year and a half in a small town in the Eastern Highlands of New Guinea on fieldwork (see image below from 1976). To have to come to terms with such completely different societies as those in Papua New Guinea so soon after completing a PhD on Latin America was a truly salutary experience.

My work in Papua New Guinea brought me into contact with the operational side of conducting population censuses and I joined the United Nations as an adviser for their upcoming census. Fate again took a turn and I was given the opportunity to transfer to the United Nations regional headquarters in Bangkok, where I worked on a comparative project on migration and urbanisation across the Asia Pacific region. After almost four years and the expiration of funding, I applied for a teaching position at the University of Hong Kong, where I was able to continue my research on Asian migration and where I remained for 14 years. In the lead-up to the return of Hong Kong to Chinese sovereignty in 1997, it was time to move on so we returned to Bangkok, where I embarked on a life as an independent consultant to United Nations organisations while maintaining an honorary position at Mahidol University.

After five years, age and family responsibilities suggested that a return to the United Kingdom was desirable and, serendipity again, I was offered a part-time position at the University of Sussex in Brighton. This evolved into a permanent fractional appointment that lasted for 17 years and provided opportunities that included not just research in Africa and Europe but also a secondment to the British government’s Department for International Development and a final serendipitous encounter to come to Maastricht on a part-time basis that has lasted for some seven years. However, age always catches up but allowed a final migration back to Scotland, a different country from the one I had left some 50 years before, just as I am now a very different person and the challenges of re-integration apply as much as any to any other migration.

Thus, migration has been central to my education, research, employment and life. When I set out from Scotland all those years ago, I had no aspirations to be a permanent migrant. In fact, I had no idea whatsoever what I wanted to do or where I wanted to go, apart from the immediate destination of Canada.  Along the way, I became an accidental academic, as well as an international civil servant, consultant, teacher, husband and father and have seen and lived in places and met people I could never have imagined. Networks were important but these were institutional rather than personal – a product of the globalisation and opportunities at the time. If a message can be gleaned from this experience, it is to maximise capabilities, grasp the opportunities offered, and the migrations will follow.