by Katerina Triantos
Americas, conflict, migration
Comments are off 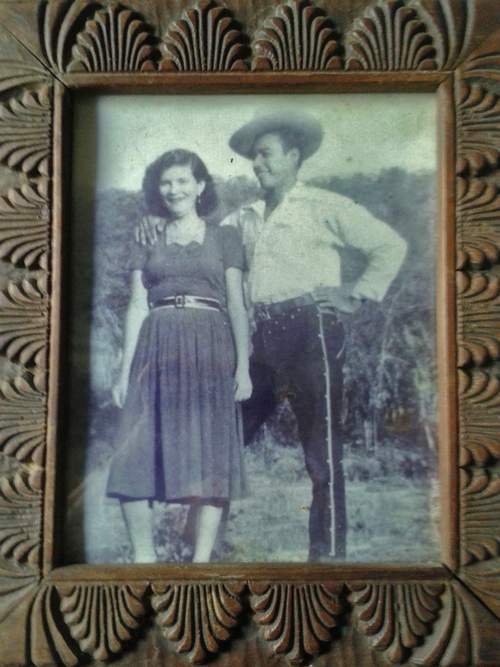 Sofia Luz Castaneda was the daughter of a wealthy family in Guatemala, a country in Central America. Her father was a farmer, who employed many men to cultivate his lands. However, one day, one of her father’s employees caught her eye – Samuel Bonilla. Sofia and Samuel fell in love, yet their union was rejected by her family because of their different social standing. So the young couple decided to elope, moving across the border to San Francisco Menendez, in El Salvador. There they lived an economically poor life. However, Sofia, true to her background, was often seen around town in long dresses, with long sleeves and high necklines. A rare sight in San Francisco Menendez!

In this town their son, Samuel Antonio, met Eloisa Escobar, who also happened to be Guatemalan, and together they had my grandmother Zoila. After Zoila’s partner, Rogelio Barrera Castillo, met an untimely death, she moved her children, including my mother Silvia, to the capital, San Salvador, in search of better opportunities and a way to support her children.

When my mom was old enough to attend university, she set her heart on Economics. However, the public university in El Salvador was closed at the time due to civil unrest. Soon my mother made a second move: to study Economics at the University of Panama, in Panama City, in January 1979. As luck would have it, this enabled her to avoid the Salvadoran civil war by just a few months. She would, however, hear of the horror stories from her family and friends. Whole families and towns were wiped out.

While living in Panama, her mom and a few siblings were granted residency in the USA and soon after moved to Washington, D.C. My mom joined them in 1985. Had it not been for the civil war, my mother would have moved back to El Salvador – because she was indeed dreaming of going back home. But because of the war – which only ended in 1991 – it would have been impossible for her to start her chosen career in El Salvador. Still, she left her thesis half-finished, knowing she would not get this chance again and that she could not finish her thesis from a distance. She left with the promise of reunion with her family and a better life in the USA.

On moving to Washington, D.C., my mom felt quite welcomed and experienced very little discrimination. Yet, as political turmoil spread across Central America, more and more people came, seeking to escape conflict. This led to a large wave of immigration to the USA, of which my family was clearly a part. As time progressed, my mother started experiencing more discrimination. She would be spoken to in such a degrading manner that sometimes she would wonder ‘Do they think I come from the middle of a jungle?’. Upon marrying my father, she remembers people began looking at her differently; better, in fact, when she told them she was married to a Greek. When my elder sister began school, my mom would often get involved in parent volunteering. She still spoke English with a heavy accent, which our school secretaries would laugh at. 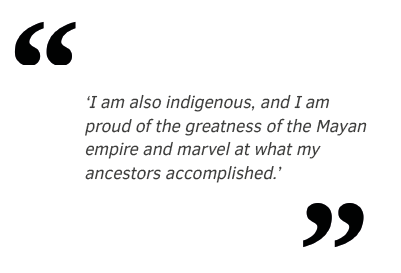 Discrimination – rooted in ideology and institutions – exists in many parts of the world. My mother, like almost 80% of Salvadorans, is mestizo. This means she has European and Indigenous ancestry. However, with roots in European colonisation, many are more comfortable discussing their European ties rather than Latin American indigenous ones. One day, my mom took us to visit the Mayan ruins close to her hometown. A news anchor, covering the story of the ruins, asked my mom on live TV why she was visiting the area. She said, “Because I am also indigenous and want to see the works of my ancestors”. To this, the anchor mentioned, “But you look so white! Why do you say you’re indigenous?” She responded with, “But I am also indigenous, and I am proud of the greatness of the Mayan empire and marvel at what my ancestors accomplished.” Afterwards, off-camera, the anchor said that many Salvadorans would be embarrassed to mention their indigenous roots.

Through a random act of coincidence, I was born to a Salvadoran mother and Greek father in the USA. Many stories of love, profession, conflict and hope moved my ancestors across the Americas and Europe (and Africa and West Asia, although our family stories don’t go so far back). My parents and I have benefited economically from the migration of their families to the USA. My mother was able to bypass political conflict and violence unfolding in her home country. Yet, she was also met with instances of discrimination. And I myself have gone on to complete my undergraduate in the UK and my graduate degree in the Netherlands, where I am currently employed at UNU-MERIT.

The media’s portrayal of Central Americans is often one-sided, negative and humiliating. More than ever, we have to remember the stories of our ancestors – their resiliency, tenacity and complexity. I am humbled by, take pride in and respect my ancestors. These stories have enriched my world view and research – I understand by an act of moving to another region, someone can drastically change the outcome of their life for better and worse in different ways. I am sympathetic to those most vulnerable, who are unable to migrate. I know that if I had been born in their circumstances, I would not have had the same opportunities. By no act of my own, simply by birth, I acquired one of the most desired passports of our current age. My mother tongue is one of the most commonly spoken languages across the world. I am quite free to travel, study and live where I desire. A privilege many, by also mere coincidence of birth, are not given.

About the Author
Katerina Triantos manages the SMART Choices and SMART Tools project. This project focuses on providing open access education on academic track content and labour market skills. Katerina holds an MA (Hons) in Psychology and Business Studies from the University of Edinburgh and an MSc in Public Policy: Risk and Vulnerability from UNU-MERIT and Maastricht University.
Share this page