by Yurissa Varela
Americas, human security, migration
Comments are off 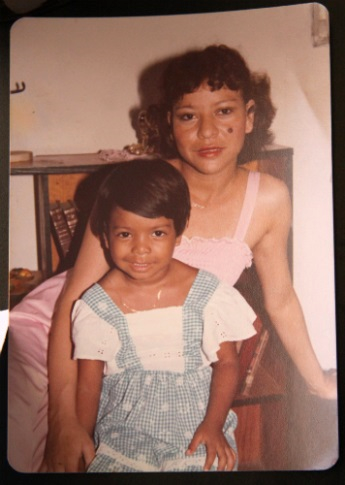 My migration story began in Honduras, a beautiful country, at the heart of the Americas. This is the land where the sacred pyramids of our Mayan ancestors stand tall among the jungle canopy, and where the coffee beans grow strong at the skirt of our mountains. We are mestizos, which is Spanish for ‘people of mixed race’. Since colonisation the blood of our indigenous ancestors has been mixed with the blood of African slaves and that of the European colonisers who settled there. It is these three influences (and more) that inform our Honduran culture and identities.

My mother and my three siblings came to Canada as refugees from Honduras after her husband was kidnapped on Christmas Eve in 1984. He worked as a journalist and was a human rights activist, which earned him the title of subversive in the eyes of the government. As a result, he was tortured and eventually ‘disappeared’. My mom’s efforts to secure his release led her to a lifelong career in human rights and the noise she made created waves that touched the international community, and essentially her life and the lives of my family.

Their journey to Canada meant a physical severing of our Honduran roots. However, the truth is that our hearts will always be between two worlds. A part of your heart remains in the land of your ancestors and a part belongs in the land that gave you safety and the opportunity to have a better life. Settling in a new country, not knowing the language, culture or traditions was not easy but the support we received from the community helped ease the transition.

My story is defined by constant efforts to preserve my language, culture, values and identity that my family instilled in me. Having been born and raised here in Canada, growing up was an interesting experience. I spoke fluent English like the other kids in my class and I did my best to fit in – but the truth was that at times it was difficult, as I assume, it is for many children of immigrant families. My world at home was Honduras and my world outside was Canada. My world at home was impacted by the post-traumatic stress response (PTSR) that my family experienced as a result of their history. My world at school was pop culture and light. The older I got, the more my worlds would collide. A trip to the Latin American store was a taste of the world I was not able to grow up in. An interaction with a Latin American stranger was like meeting a distant relative I had never met before.

The beauty of Canada is that things like this are very much possible. It is a country that fosters multiculturalism. We have a Latin American community that hosts cultural gatherings and events. We also have schools that teach Spanish and Latin dances (salsa, bachata, merengue, etc.) and our Canadian passport gives us the privilege to travel more easily to reconnect with roots once lost. 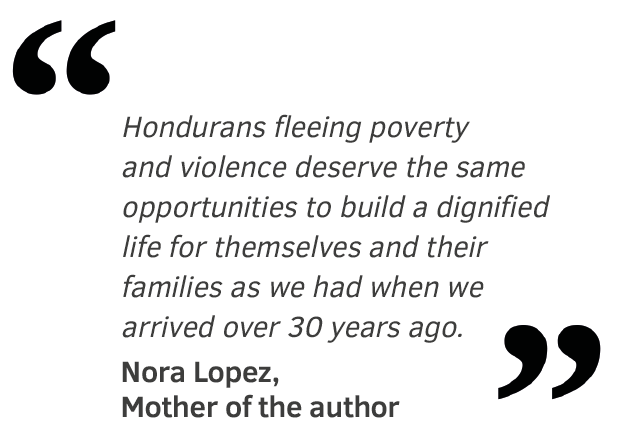 Now today, we see thousands of Honduran and Latin American people fleeing north seeking a better life and safety for their families. Labelled ‘criminals and invaders’, these mothers and innocent children are seeking the same things my family sought all those years ago. Recently, I took a trip to Mexico to meet with the migrants in the caravan which confirmed this. When we arrived, there were over 5,000 people making their way on foot through Veracruz, Mexico, an area known as the heart of cartel land and the most dangerous portion of the migrant’s journey to the United States. Each moment spent among the families and children made me realise that my mother was one of those mothers and those children were my siblings. A different time, a different family but they are us. My mom was able to get the attention of the international community but she was the exception. More often than not, many voices from the Global South don’t reach our ears in countries of privilege. We, as second-generation migrants, are born to privilege and with this we hold a huge responsibility to speak out.

Powerful countries like Canada and the United States have a significant impact in not only creating the conditions experienced by much of the world’s poor but also in ensuring their safety. The older I get the more I realise that we are connected to these causes around the world even if they seem so far away. And the more the impacts of climate change become evident, the more we will realise that our collective futures depend on one another.

About the Author
Yurissa graduated from the University of Ottawa with a B. Soc.Sc. in International Development and Globalization (French Immersion). She continued at the University of Ottawa where she is currently a MA candidate in International Development and Global Studies, specializing in Environmental Sustainability. Her specialization focuses on water scarcity and transnational environmental activism in Latin America. In her internship at UNU-INWEH, Yurissa assists with the assessment of the global status of water research at education.
Share this page