by Sara Salomone
economics, Europe, migration
Comments are off

I would define my family in light of the lasting integration of Europe, which began with three Catholic Founding Fathers in 1945. When a handful of visionaries – Adenauer, De Gasperi, and Schuman – put us on the path to an integrated Europe; to the peaceful borderless region that we live in today.

My family has been Italian for generations. My grandparents and great-grandparents were all Italian. They moved domestically a bit: from Apulia on my mother’s side and from Umbria on my father’s side, before finally settling in Rome. Both my parents were born there, as was I in 1979, and I lived happily and comfortably in the Italian capital until 2007: a typical pampered Italian child.

My parents taught me to respect traditional values, but also to be open-minded. I have travelled a lot and explored countries all over the world, but the idea of leaving my birthplace as well as my family and habits was not even on my radar. Yet, in 2004, while preparing my undergraduate dissertation in International Economics, something within me started to change.

During a research stay at the California Institute of Technology, I was impressed by the various diasporas of Indian, Chinese and other international students, researchers and professors. I had heard about this phenomenon of brain drain during my undergraduate classes of International Economics but I had never figured out how big it was, what could be the reasons behind such a migration choice, or what were its economic outcomes.

I started thinking more and more about brain drain: about people’s motivations, the broader economic and psychological individual costs and, of course, the economic consequences for developing economies ‘left behind’. My undergraduate thesis in International Economics, focusing on brain drain (essentially the migration of highly skilled people) was starting to take shape.

In going through the literature, two authors came up time and again: the distinguished senior Professor Jagdish Bhagwati (Columbia University) and the younger emergent Professor Frédéric Docquier (Catholic University of Louvain). Their views were opposite but equally bright: the former criticising the economic consequences for developing countries, while the latter promoted the so-called brain gain by discovering positive feedback effects for origin economies.

I enjoyed the drafting and the defence of my thesis so much that I decided to do more academic research on the question. At that time, I became pretty sure of what I wanted to be as a ‘grown up’: an open-minded Italian researcher on economics. I applied for a Master in Development Economics and International Cooperation and for a PhD in Economics at the University of Rome ‘Tor Vergata’. A third leading economist on migration issues was based in Tor Vergata and became my initial PhD thesis supervisor, Professor Riccardo Faini. 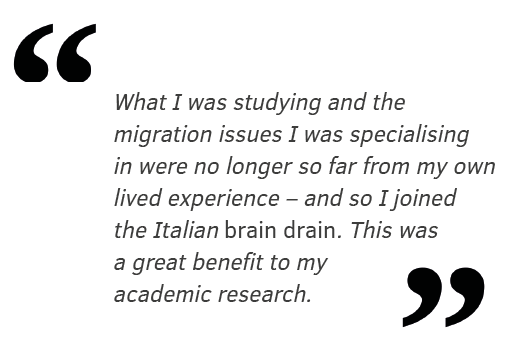 However, something happened at the end of the second year of my PhD, as if Someone had already prepared an unexpected future for me. I never would have imagined myself joining the many skilled researchers outside of their country of origin. But that was what happened. Professor Riccardo Faini died suddenly so I could only partially pursue my academic research in Rome, given the lack of economists specialised in both development and migration issues.

To complete my PhD thesis, I therefore applied to the Catholic University of Louvain, in Belgium, in the ‘Heart of Europe’. Professor Frédéric Docquier, the leading expert on brain drain issues replied positively and hired me. I could not believe it! What I was studying and the migration issues I was specialising in were no longer so far from my own lived experience – and so I joined the Italian brain drain. This was a great benefit to my  academic research. I had the chance to write my thesis within a stimulating and leading Migration Research Group made up of other dedicated and distinguished scholars.

In principle, my research stay at the Catholic University of Louvain should not have been forever. I had planned to go home after completing my four-year PhD. But again Providence intervened: this time in the shape of love. During my first year in Belgium, I met the man who only two years later would become my husband. A migrant himself, who had moved with his family from Spain to Belgium at the tender age of eight. A different nationality but the same traditional values. That’s the beginning of my EU integrated family: an Italian researcher, married to a half-French, half-Spanish husband, with three half-Spanish, half-Italian children, living in Belgium. Could the EU Founding Fathers ever have hoped for a more integrated European perspective?