How does government distrust impact sustainability?

by perezobregon
education, SDG4
Comments are off 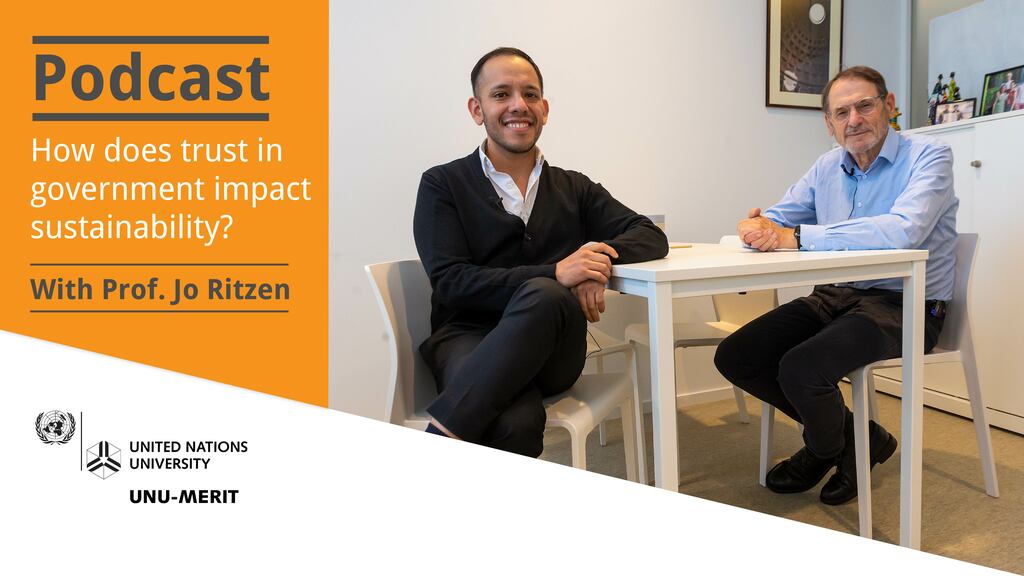 His current research interests revolve around trust in government and sustainability issues, and he is also leading an initiative to improve long-term decision-making in the Dutch Parliament. In this interview, Prof. Ritzen sits with Leopoldo Pérez Obregón, Digital Communications Officer at UNU-MERIT, to discuss these topics.

LPO: What has your long career in education taught you about the importance of trust in government?

Jo Ritzen: Can I take one step back from how I came in education? And also how that step has been very much part of how I am now entering into a trust. I was a student of engineering and economics. There, I was doing these two studies at the same time, and the university’s rector said, ‘’It looks to me like you should help me in the research on the economics of education, particularly for our university’’. So as a student assistant, I worked for him, and that’s how I ended up in education. And then, in education, I realised very quickly that it is not about something, you might say, engineering; it is about social cohesion.

In my time as a minister, that turned out to be the leading topic among European ministers, so you spend lots of time with your colleagues in other European Union countries. Because education is not an easy portfolio, you will notice that others have the same problems. And if you talk with your colleagues, you notice you are not alone. But there, social cohesion was something which all of us thought was very much what education is about: creating understanding for each other and the willingness to cooperate. That is the connection between trust, trust between people and education. What are the mechanisms by which people start to feel more concerned about each other? Now, trust in each other and trust in government are closely related.

LPO: Why do you think we should care about trust in government, and how would you define that term?

LPO: You are working on a project related to this issue. Can you tell us more about this?

Jo Ritzen: The project is called ‘’Verhoogkiesdrempel’’ which is a petition to Parliament to increase the threshold for elections to improve decision making long-running decision-making in Parliament in The Netherlands. And the idea is that we can improve long-run decision-making, particularly in the context of sustainability, by having fewer parties which incorporate all interests. Which debates this more seriously than how it is done at the moment in which many small parties capture the day with debates that are not essential for the long run.

The threshold at the moment is shallow. It is .69 of the vote because they are under 50 seats. We think that is too low. And that’s not just we. That’s broadly shared. But why would this lead to better long-run decision-making? Because it would generate the feeling that this is a serious debate which is taking place with the general notion that people need to trust the government, that they do something which, even if it is not in their direct interest, may still benefit themselves and their children and maybe even grandchildren on the long run.

LPO: How do you intend to get a better understanding of the causes for trust or distrust in government

Jo Ritzen:  So that is something I very much like to draw in. Also, students from the MPP program and those in the MPP program have already worked on that. We are now working on a publication which has analyzed 12 northern and western European countries and how trust is related to the education of people, to incomes, and to what the government has done for people looking at the differences in trust between countries and trying to explain where they come from.

The one thing we also try to pinpoint is that the role of education has been increasing in the past 20 years. You may think that is a good sign, but it is also a sign of polarization that the better educated have more trust and have continued to increase trust. Where on the other hand, the lower educated seem to have increasingly less trust, so that is something which we can also show in the diagram. Polarization has, in the past 20 years, been very much a matter combined with the level of education.

LPO: To what extent does distrust of governments at the national level impact multilateralism, in your opinion?

Jo Ritzen: Very clearly, polarization goes in the direction of national and international. The support in northern European countries for the European Union cooperation, that support is mainly from well-educated people. And with higher-income people on the lower end, that is much lower. And that also has a lot to do with the fact that education stands for more or fewer traditionalists or open to experiences [attitudes]. And that has a lot to do with migration in which well-educated people –by the way, that is something we find consistently– that overall diversity is viewed as positive in North-Western Europe. Contrary to what people expect. But it is also very much divided among lower educated people. It is looked at as negative. They see it as a threat because they see it as something which goes against their financial interests. But also against our traditions. We like to keep to our traditional values. We like to keep to values around how we celebrate Sinterklaas and how we have celebrated all kinds of things. So these are the symbols of the traditionalists, and I think political parties should take those symbols seriously.

When you have a policy on the environment, don’t think that this is something you should decide in Parliament and then say, ”from now it is going to be done”. When you think about symbols, the symbols are sometimes viewed as racist; don’t say, ”we are going to condemn them from the top”. Racism, of course, should be condemned. But when symbols have been around for a long time and are precious to many people, start discussing them. And so, in this respect, I believe that local governments should be far more involved in national policy-making rather than the other way around, as happens in general.

LPO: What role institutions like the UN or United Nations University, in particular, can play in restoring trust in government? What do you think we are doing well to regain citizens’ trust, and what can we improve for that aim?

Jo Ritzen: I think that the United Nations has been one of the best things which have happened to the world. In the sense that we need to formalize interpersonal trust on a worldwide basis. With climate change, we now notice that we are in one world, and we must do this together. This element should be further expanded, and I like the notion that United Nations universities all should now focus on the significant question, which well is going to be our survival. But within that context, also look at how decision-making takes place. So the quality of government and trust, interpersonal trust, how it works, why it increases. How it also gallops away at some points. I think these are very important points to have on the agenda. Broader, not just for this United Nations University but also for all United Nations Universities, because it is a way of looking at innovation differently. It is now an innovation in policies. It is now the chance also to have broader support for policies which can help [us] to survive.

LPO: I would like to put myself in this situation, like an imaginary moment. If you were to return to the World Bank today, you’re appointed. What will your first decision or action be towards addressing this issue we are discussing about trust in government?

Jo Ritzen: I had such a moment before and would use it again. And I came into World Bank as an advisor to the president was a perfect position. And I had experiences with ministers of education and with also ministers of finance, and Ministers of Economics. I noticed that the World Bank works with projects. The main advantage of the World Bank, above the United Nations, is that it has money. The money is spent on projects. So I would put the money and quality of governments and, related to that, in trust in government. So it is something in which I would make this an agenda. So we know now much more about the quality of governance. And in the meantime, not much has changed because the World Bank has not changed in terms of dedicating its funds to do this. Different to the European Union. The European Union has done, funnily, enough.

LPO: What can you say about the issue of distrust in government, particularly in the Netherlands in general?

Jo Ritzen: This has always been a country not too different from other Northern and Western countries. And so that is the first thing is the whole group of Northern and Western European countries is very homogeneous. That’s the first thing. Dutch always think about themselves, that we are so different in trust or other things. No, it is the same as Germany, Belgium, and Denmark. We are a bit more Danish or Scandinavian.

LPO: And what does that mean?

Jo Ritzen: That means that there is generally a high level of trust and interpersonal trust, which has been changing. It has become less among lower educated people and more among higher educated people.

LPO: And why did that change?

LPO: This relates to your initiative that we were also discussing now. How can people know more about it?

Jo Ritzen: I’m going to make sure that UNU-MERIT everyone will be informed that the website is there and can look at the discussions.

LPO: Okay. And if a student is interested in joining, I imagine they can also contact you.

Jo Ritzen: Yes, exactly. Exactly. This is excellent stuff for the thesis, and please reach out to me if you are interested in this direction.

LPO: So thank you for this talk, Jo; we will leave all the relevant links for people to know more about this in the description of this podcast. And thank you very much for taking the time to talk with me.

Jo Ritzen: It was a great pleasure. Thank you.