Evidence suggests that millions of individuals are disregarded in risk and vulnerability analyses due to a lack of sufficient data. In her master’s thesis research, Katherine Bruni (recent MPP alumna) tried to identify a baseline understanding of the exposure, susceptibility and adaptive capacity of stateless Kurdish populations in Iran, Iraq, Syria and Turkey. 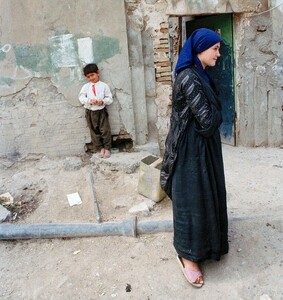 Katherine: During my time as a student in the 2021-22 cohort of the UNU-MERIT and Maastricht University Master of Public Policy programme, I researched how the legal concept of statelessness influences individuals’ vulnerability to slow-onset climate change-induced events, such as land degradation and water scarcity. Underpinning my research is the theory that the effective identification of vulnerabilities and risks is crucial if states wish to successfully adapt to the changing climate.

My research focused on the stateless Kurdish population across Turkey, Syria, Iraq and Iran and served to bridge the realms of migration studies and risk and vulnerability studies. I selected this topic largely due to a passion for environmental justice and a desire to shed light on the issues facing vulnerable populations. Stateless Kurds were an appropriate case study because they are generally excluded from consideration when formulating climate change adaptation strategies and because they are the largest known stateless nation in the world. The distribution of this population can be seen in the map below. 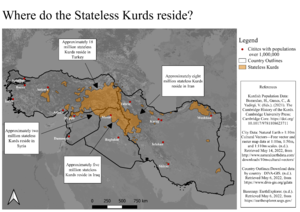 Kurds are generally disregarded from risk and vulnerability assessments due to issues perpetuated by political turmoil and cultural suppression. As such, my thesis served to adapt a current risk assessment approach to provide an analytical baseline understanding of the exposure, susceptibility, and adaptive capacity of this population. This is a crucial understanding to ascertain because if groups consisting of millions of people are not considered when designing state-wide adaptation strategies, that can theoretically lead to increased vulnerability of the population and reduced capacity for the country as a whole to adapt to climate change . A primary example of this can be seen in the issue of water scarcity: when a state such as Turkey prioritizes the installation of efficient irrigation systems within the agricultural sector, they generally do so with the aim of reducing water loss. Theoretically, this method is sound if everyone within Turkey is able to afford the installation of those new systems. However, stateless persons would probably not have the economic entitlements to be able to afford such an upfront cost nor would they have access to economic incentives such as subsidies that would assist in implementation. This places the stateless Kurds on an uneven playing field and makes adapting to climate change impacts difficult – but also undermines the government’s original goal of reducing water loss from the system (since they did not account for this subsect of the population not being able to utilise the strategy that they established).

The process of researching this topic presented many challenges. One of the primary reasons that current mainstream risk and vulnerability assessment approaches are not applicable to stateless groups is due to a lack of verifiable quantitative data at a household or individual level . This meant that for this thesis, I needed to craft an adapted approach to a current risk framework that could be applicable for a societal-level analysis of this stateless population. Once the methodology was crafted and effectively redesigned to be used in this thesis, the data collection process was relatively smooth, and implementing the adapted framework was effective. However, getting to that point resulted in many hurdles – especially when considering that the analysis was a consideration of four different countries and the methodology was a three-pronged analysis approach meaning different data was needed for each portion of the analysis.

In my thesis, I highlighted the necessity for including these overlooked populations, such as the stateless Kurdish population, in risk and vulnerability analyses to inform climate change adaptation and mitigation policies. I achieved this by analysing the current physical exposure to water scarcity and land degradation, the susceptibility of the population insofar as political, economic, and cultural entitlements are concerned, and adaptive capacity to these phenomena of the stateless Kurds within Iran, Iraq, Syria and Turkey. This led to the discovery that stateless Kurdish populations have limited capacity to adapt to slow-onset climate change-induced phenomena due to reduced entitlements coupled with physical exposure to water scarcity and land degradation. In addition, many of the adaptation strategies being promulgated are inapplicable or infeasible for this population reducing not only their capacity to adapt to current impacts but also diminishing their ability to anticipate and pre-emptively mitigate future impacts.

Outside of that overarching conclusion, my thesis also provides an adapted methodological approach that can be used to consider other groups such as indigenous, transient, and other stateless populations that have long been disregarded in risk and vulnerability literature and analyses. This opens the door for further studies into these groups so that they can be included in adaptation strategies and mitigation effort.

A multitude of policy recommendations arise from this – aside from the identification that more data on this population is needed to gain additional insights into their vulnerability, there is an overarching conclusion that these groups need to be included within climate change adaptation strategies if countries wish to successfully mitigate and manage climate change impacts. My research highlights that the status quo of leaving the stateless population exposed and susceptible with limited capacity to adapt is not going to work if states wish to adapt to climate change impacts.