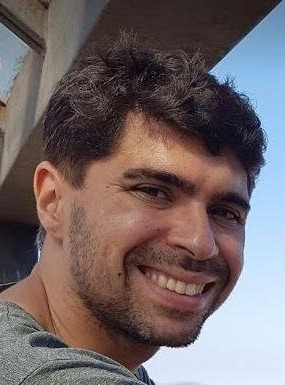 This series tracks the progress and priorities of our full-time PhD fellows. Some are new recruits living in Maastricht, others are working abroad while waiting to defend. This time we caught up with Danilo Sartorello Spinola, a PhD fellow from Brazil who previously worked at the UN’s Economic Commission for Latin America and the Caribbean (ECLAC).

How did you hear about our PhD programme? And, now that you’re here, what are you working on?

I previously worked at the UN ECLAC in Santiago de Chile, in a division that has partnered with UNU-MERIT on various projects. For two years I worked under Mario Cimoli, who used to be a colleague of UNU-MERIT Director, Bart Verspagen. It was Mario who first told me about the programme. Then Alejandro Lavopa, a PhD fellow at UNU-MERIT at the time, visited ECLAC and suggested that I apply for the PhD programme. So I learned about it by word of mouth.

My PhD research focuses on industrialisation and technological change, mainly in developing countries. During my career I’ve worked a lot on structural change because ECLAC runs a lot of projects with the poorest countries in the region, like Bolivia, Ecuador and Peru. When I was working at ECLAC, around 2011-12, commodity prices were much higher, so governments were better able to finance development projects. They had a clear intent to shift their productive structures towards more diversified sectors, in which they could industrialise more and get away from the so-called “natural resource curse”.

In Ecuador, they realised that cocoa was very important, so they developed the sector to refine the cocoa at home. They were able to refine the natural resource themselves, thus creating an income multiplier inside the economy. This is the basic model: instead of just producing the raw materials and exporting them, you develop industry and the economy around this natural resource, thus maximising potential gains. A big problem, however, is volatility. It’s very hard to develop long-run economic processes and industrialisation, demanding decades of investments, in countries where macroeconomic conditions are very unstable.

We recently hosted a conference in Vienna, which partly focused on premature de-industrialisation in Africa. Is that also a question for Latin America?

Yes, that’s played a part in the recent crises in Bolivia, Chile and Venezuela. My research focuses on boom periods and how they create the conditions of crises. You have incentives for de-industrialising sectors and moving towards either services or commodities. So during the boom, you end up generating a situation which we call hysteresis (i.e. “effects that persist after the initial causes giving rise to the effects are removed”).

In other words, you have a short boom followed by a long bust, so after the cycle finishes you’re in a worse situation than before – because you changed the structure of the economy. You end up moving towards sectors that are less knowledge intensive, which in turn creates a “development trap”. So those countries remain underdeveloped economically because they don’t manage to upgrade. It’s often counterintuitive because if you observe the macroeconomic indices during the boom, the country seems to be doing really well. But if you look further into the structure you realise that there are big movements towards less productive sectors. That’s happened time and again in Latin America.

What advice would you give to anyone applying for a PhD here? What’s special about UNU-MERIT? 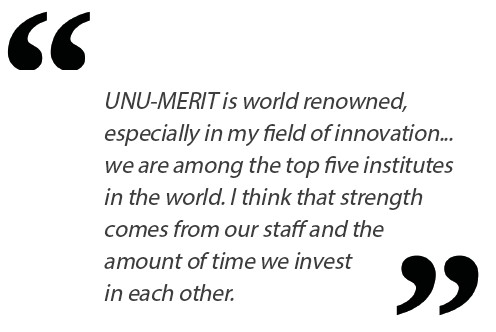 First, look at the research themes and see if your research interest is a good fit to any. Then look at the professors’ profiles to see who might be able to supervise you. This is extremely important when you arrive because in the first year we have a lot of coursework.

Second, bear in mind that researchers at UNU-MERIT are not only academics. We have a lot of people coming and going from various sectors; and this is an advantage because you don’t have to stay in academia at UNU. You have more flexibility to move on to international institutions, NGOs or consultancies.

Fourth, UNU-MERIT is world renowned, especially in my field of innovation. If you go to REPEC, you can see that we are among the top five institutes in the world. I think that strength comes from our staff and the amount of time we invest in each other. For example, at one point in my PhD I felt a little stuck, which is not unusual. So I went to Bart Verspagen, our director who is also my supervisor, and we had a four-hour conversation in which we tried to figure it out a way forward based on the literature, different models and econometrics. So it was all about how we could solve a particular problem – or rather solve the problem of asking the right question!

Supervision is important, but so is understanding various methodologies and being able to operationalise them. I remember I had a conversation with Thomas Ziesemer, who is an expert on econometrics and regression models. Like my supervisor, he spent an entire afternoon helping me to understand and make the most of various models. Here at UNU-MERIT we’re very lucky to have this kind of open door policy with such leading experts in their fields. Our Deputy Director Neil Foster-McGregor has also helped me a lot. One of my activities right after I finished my first year was to work on the UN Industrial Development Organization’s flagship publication, the 2018 Industrial Development Report (IDR). I ended up co-authoring two background papers with Bart and Neil for the IDR. That was really interesting because we were working with a UN institution here in Europe, so we had to go to Vienna, which also helped build our network among researchers and UN officials.

Finally, over the last few months I had the opportunity to be a visiting scholar in a foreign institution via the CatChain (Catching up along the Global Value Chains) project, co-led by UNU-MERIT. I spent eight months abroad – with the opportunity to choose among Brazil, Costa Rica, Malaysia and South Korea, in order to work with the local staff. This opportunity was very important for me to expand my academic network and move forward with my PhD thesis. In fact, I managed to finish my PhD manuscript while abroad. This was another great opportunity that UNU-MERIT offered me.

About the Author
Danilo Sartorello Spinola is a PhD Fellow at UNU-MERIT. Danilo holds a BA, a MA and a PhD of Economics from the University of Campinas (Unicamp), Brazil; and a BA of Social Sciences from the same university. He previously worked as a consultant for the Economic Commission for Latin America and the Caribbean (ECLAC), and his research includes Development Economics, Macroeconomic Theory and issues related to Industrialisation. He is also interested in Modeling and Quantitative Methods.
Share this page