Matilde Perotti (alumna of the MPP 2021-22 cohort) outlines the challenges of undertaking research on disaster risk management in refugee camps, drawing on her firsthand experiences of working in a number of challenging situations. 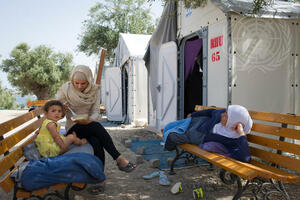 I am a graduate of International Relations and Global Affairs, and I have recently finished my double-degree master’s in Public Policy from the United Nations University in Maastricht, specialising in migration studies. My thesis was on the role of NGOs in natural disasters, specifically in the temporary refugee camp of Kara Tepe on the Greek island of Lesvos. I mainly focused on how disaster risk management is implemented in the camp and how the community engages in it. My interest in this topic comes from my experiences volunteering in two other Greek refugee camps (Samos and Kavala) where I witnessed first-hand the natural vulnerabilities to which camps are exposed. These experiences led me to believe that it is essential to dedicate more research to this issue in order to ultimately ensure that residents are provided with dignified and sustainable living places.

I chose to analyse Kara Tepe for four main reasons. First, in 2020 the former refugee camp in Lesvos (Moria) completely burnt down, demonstrating the unpreparedness of the stakeholders to deal with natural hazards. Second, the camp’s position is precarious, given that it is located on a fragment of the coast and surrounded by the sea. Third, despite increasing evidence of the rising trend of natural disasters, there is little research being done on the impact of natural disasters on those in refugee settings or on ways to mitigate the impact. Lastly, despite the ample research on the impacts of climate change in developing countries, European states remain unprepared for the significant consequences that will befall them in the coming years.

My research questions looked at the circumstances of Moria’s fire, the response of NGOs to that event, the extent to which a community-based approach is implemented and what its challenges are, and lastly, what can be improved in the current disaster risk management in Kara Tepe. The research is based on a qualitative method involving individual semi-structured interviews with NGO staff and volunteers working in Lesvos or who have worked there in the last two years. Engaging participants was a smooth process that enabled me to draw on a variety of ethically coherent data that provided transparency to my research and helped me understand crucial research questions. 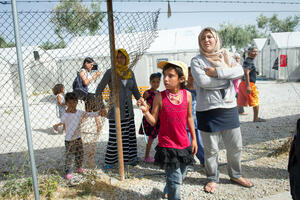 My research findings show that most of the NGOs in Lesvos are not dedicated to disaster risk management activities, meaning that the entire community is characterised by a high level of unpreparedness to cope with natural hazards. Furthermore, every participant declared that the NGO they were/are working for adopts a community-based approach. Moreover, questions regarding Moria’s fire revealed that during that tragic event, NGOs had a primary role in supporting camp residents, despite the authorities preventing them from giving as much support as they were aiming to give. COVID-19 also played a significant role in fallout from the fire disaster as NGOs were technically closed and short-staffed. This further proved that the camp was highly vulnerable to natural hazards and that no community-based strategies were adopted.

Further, my findings show that the basics of the community-based approach are still missing in the management of Kara Tepe. Collaboration and communication between stakeholders is chaotic and disorganised and there is hostility between NGOs, authorities and locals (who are divided between those who are tolerant of the refugees and those who are opposed). Moreover, the stakeholders involved often deny the agency of refugee community members, considering them to be poor victims or delinquents deprived of any decision-making power. References to ‘white saviours’ and ‘voluntourism’ were frequently raised as issues during the interviews.

Much of this means that the main challenges preventing a practical community-based approach in Kara Tepe stem from the inability of all stakeholders to work together; the fallout from the COVID-19 crisis which led to increasing securitisation measures in the camp; the financial unsustainability of the NGOs (exacerbated by the war in Ukraine); the lack of political and social will to operate for the refugees’ situation; and a range of humanitarian work-related limitations. In  answer to my main research question, a community-based approach is far from the norm in Kara Tepe, despite the high exposure to natural hazards. NGOs are trying to make the best of the situation, but they are unintentionally creating some suffering despite their best intentions.

During the research process, it has been frustrating to hear univocal opinions regarding the degrading conditions of the camp and contrast these with a lack of interest by the authorities in improving the current situation or abiding by international standards and frameworks.

On a personal level, I admit to disappointment that, despite the increasing frequency of natural disasters, there is still a low level of knowledge and interest regarding disaster mitigation strategies in Lesvos. Moreover, it is not surprising that the most vulnerable in our society, again, bear the mistakes of the most privileged. With my master’s thesis, I tried to close the gap in the literature regarding community-based disaster risk management in refugee settings, especially in the European context. Further, I hope that my research will help policymakers to take into consideration the urgent need to improve the living conditions in Kara Tepe and provide more attention to natural disaster-related issues.