Changing places: Between here & there, the local & the global

by Parvati Nair
Asia, Europe, migration
Comments are off 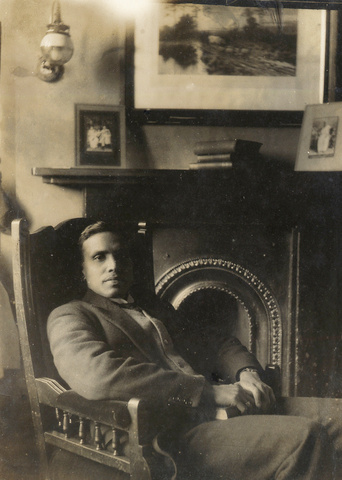 When I read the news and see the word ‘migrant’ over and over again, I can only wonder who this refers to. Who exactly is a migrant? Is it my fellow traveller, the person queuing at the border or the neighbour from another country who lives next door to me but, like me, came here from another place? Who, among us all, is not a migrant? Are we migrants if we move between places? And are places also not rendered migrant in themselves if our moves and the bigger contexts that frame them and us force changes upon them?

I was born a long while ago on a snowy night in Oslo. This was not the Oslo of now, where a third of the population is either immigrant or born to immigrant parents. This was the Oslo of old, of presumed certainty of place and identity. My parents, both from southern India, had gone to live there three months earlier. Though pleased that I had safely arrived, I suspect that, in those days when hospital rooms did not come equipped with television screens, my father did wish, deep down, that my birth had not coincided with the distinct novelty of the major ski jumping competition that he had missed seeing as a result. My mother recalls the freshly fallen snow and the bright, Nordic light that flooded her room the morning after. The obstetrician and midwife welcomed me, because, in that bygone time when international migration was an exception to the norm, I was the first new-born with dark hair and eyes that they had ever handled.

In prior months, my parents had travelled from Phnom Penh via Thailand to various cities in India, after which they had set off for the United Kingdom to board a ship from Newcastle to Norway. In the years ahead, we moved every so often, from Oslo to Delhi to Warsaw to Rabat to Tunis to Madrid to London… and so on. Mine was a travelling childhood where we all knew and accepted that we were ‘here’ only for a while.

Throughout, my parents made reference to ‘home’, a place of undefined location that pointed to India. I never knew if they meant the whole country in its vast diversities or a specific place there – and, if the latter, which place? The truth was that a good part of my family were internal migrants, with one set of grandparents and various aunts and uncles moving to the big cities, as India became independent and moved into the second half of the twentieth century. Modernity, decolonisation and the needs of the everyday had turned most of our extended family into migrants. Home, therefore, was ill-defined in space and time. Home, of course, meant wherever one lived, but also wherever one thought – with that stubborn folly of the migrant that refuses to recognise the irrevocability of change – that one might, in the final migration, return to. ‘Home,’ a blurred constant that buzzed like tinnitus in the background, signaled a mythical referential frame for our identities, poignant as that which was both intimate and distant, even as it was so hard to locate. Our lives were lived against this idea of ‘home.’

In actual fact, my parents and I left landscapes and locations, criss-crossing climates and cultures, learning that humans, however different they may be, have more in common than not. But, with the angst not untypical of adolescents, for me there were also many unanswered questions as I was growing up. What of community? What of belonging? What of identity? Were they not all defined by place? 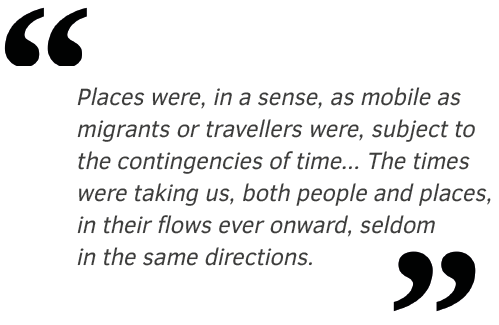 Each time we left, we vowed that we would, in time, return, revisit our street, reflect on our house from the outside, meet old friends. We seldom managed to. And whenever we did, the visit would only serve to confirm distance and departure. The small vegetable shop we once knew so well would have morphed into a supermarket, its toothless owner now long dead, the quince tree on the street outside would have been felled to create parking space, or the old, rambling house would have been knocked down and turned into a posh apartment block. The places changed too and the people we had known often moved on. Places were, in a sense, as mobile as migrants or travellers were, subject to the contingencies of time. Place, it would seem, was not a great guarantor of belonging or identity. The times were taking us, both people and places, in their flows ever onward, seldom in the same directions.

Gradually, it became clear that the dilemmas of identity could not be easily resolved through reference to place, because places also, in a sense, migrate or transform. That somehow cast a certain comfort onto the blur of ‘home.’ In any case, if we had thought about it, we would have noticed that places have a way of slipping beyond the definitions one gives them, of being multi-layered and kaleidoscopic (and all the more so for those from the margins of the West, from places that bear the history of colonial imprints upon local cultures). For families like mine are born into a kind of displacement that comes from the fact that the ‘here’ always contains a ‘there’ and every affirmation of the former includes that of the latter. Thus, when my parents spoke of ‘home,’ it was not just of the humid heat, the coastline of tropical seas, the scent of jasmine at night or the ringing of the temple bells, but also of pink tulips in springtime, of grey daylight that cast no shadows and of the green vales of England – part and parcel of colonial education in the tropics that turned place into a doubled and restless question mark. Every ‘here’ contained the dissonance of a ‘there,’ so that ‘home’ – always beyond our reach – signified the one constant in the imagination of the colonised – the sense that this place, this ‘here,’  even this ‘now,’ is not a whole unto itself.

I was not born a colonial subject (officially), but I was born a migrant and I live my life so. My colonial heritage has stood me well in navigating the open-ended routes that shape my story, in thinking through the life stories that I have encountered through my work on migration and in working towards a political acceptance of mobility that is reflected in policymaking. I think of places as paradox, both as fixed or identifiable locations on a map, and also as open to flux, subject to contingencies that are shaped by the global and that impinge upon the local. Place, for me, is not just about settlement, but about settlement unsettled: about daily life in its plethora of practices, about departures and arrivals, about the migrant in the everyday and the everyday lived in terms of migrancy.

About the Author
Parvati Nair is a cultural specialist who works on the nexus of migration and culture. She joined UNU in 2012 to found and direct the United Nations University Institute on Globalization, Culture and Mobility (UNU-GCM), based in Barcelona. In 2019, she joined the UNU Vice-Rectorate in Europe as Special Adviser on Migration. Parvati is currently seconded from Queen Mary University of London, where she remains Professor of Hispanic, Cultural and Migration Studies, engaging in research and doctoral supervision.
Share this page