by Rajneesh Narula
Asia, business, working paper
Comments are off

The Journal of International Business Studies (JIBS), one of the most cited inter-disciplinary journals in the social sciences, marked its 50th anniversary in 2019. Although considered by many to be a business discipline, ‘International Business’ today covers a wide intellectual space from trade, FDI, R&D collaboration, to sociology and political economy studies. It sits squarely between economics and management, often cross-fertilising between the two subjects. Indeed, a number of UNU-MERIT researchers have actively published in JIBS, and several (including myself and René Belderbos) are engaged with its editorial boards.

Arguably, the highlight of the 50th anniversary was the dedicated special issue, with a selected group of papers highlighting societal challenges in a globally interconnected world, as well as more management-oriented perspectives on the growth of cross-border firms and actors. I was therefore honoured to have my paper included in the special issue (a version appears in the UNU-MERIT working paper series) that observes that even when multinational companies try to do ‘the right thing’ in developing countries, this can have unintended negative consequences for society.

The inspiration for the paper came from a field trip to Bangladesh, where my doctoral student and I went to investigate how (and if) domestic suppliers in apparel global value chains upgraded their activities. In the midst of these interviews, I noticed that almost without exception, everyone went out of their way to emphasise that they only relied on domestic suppliers in the supply chain who were able to maintain and enforce globally accepted health and safety standards for their workers. I found this uniformity strange, since, at least initially, labour standards were irrelevant to the subject of the interview.

A few basic facts about Bangladesh and the apparel industry: Apparel is its largest export sector, and all major brands source a considerable proportion of their merchandise from the country. Bangladesh’s comparative advantage derives from low cost labour. Women account for most of the unskilled jobs, which has been great for female economic empowerment and emancipation.

Like most developing countries, the informal sector dominates the Bangladeshi economy, with close to 90% of all economic activity undertaken by unregistered firms and workers. The informal sector is unregulated and cash-based, and consists of unregistered small businesses, including subsistence farmers, corner shops and pieceworkers.

Informality happens to be one of my key research interests so I wondered to myself, ‘How have these informal actors adapted to these strict, new requirements?’ How has this affected the substantial number of informal workers and enterprises? Informality is a major barrier to economic development. Such workers and enterprises are unable to move beyond subsistence because they are inefficient, have limited access to public goods, skills development and capital. Governments want to formalise the informal sector so that it can be regulated, prompting smaller businesses to grow, create employment and improve productivity through training. Overcoming underdevelopment relies to a great extent on formalising the economy, and being able to help these actors to be more efficient and productive. 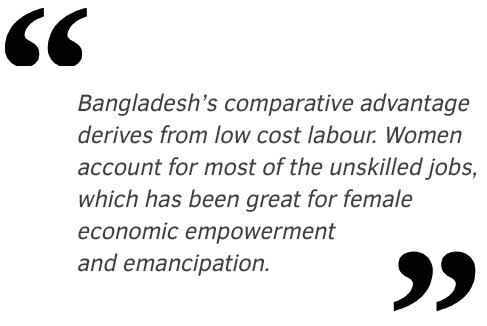 The pressure for major international firms to improve working conditions throughout their supply chain has been increasing over the last decade. NGOs and other stakeholders now expect multinationals to accept greater responsibility for the labour practices of all sub-contractors, in what is known as a ‘full-chain approach’. This severely increases monitoring and enforcement costs within a large network of suppliers, which threatens their competitiveness. The costs of full-chain responsibility are even higher in developing countries, where global value chains typically rely on actors and resources from the (large) informal sector to achieve low costs.

Essentially, NGOs and interest groups want labour standards to be enforced through audits based on internationally recognised codes. However, these are most appropriate for factories mainly employing a formal, permanent and educated workforce. It results in these multinationals (and their major suppliers) to restrict access for small-scale sub-suppliers, informal enterprises and informal sub-contractors (and the largely female unskilled workers they employ) to global value chains, and effectively prevents smaller, informal firms from upgrading to higher value-added segments of industrial production. Actors or enterprises who cannot afford to be certified as compliant are excluded from the global value chain.

Meanwhile, formal suppliers have benefitted from the exclusion of the informal sector, by expanding their own operations and undertaking less outsourcing, reducing costs by increasing productivity through greater investment in modern, automated production methods. This allows them to be compliant with stricter labour standards, but doing so inevitably reduces employment opportunities for unskilled workers, and leads to a tangible reduction in female workers.

In developing countries with large informal sectors, and with government unable to assist in monitoring of compliance, higher standards can have significant negative consequences because they make it difficult for local actors to engage with global supply chains. In a global world where countries rely on multinationals as catalysts for employment and growth, it becomes challenging to attract foreign investors.

Full-chain responsibility may only be achievable in an economy where the majority of the actors are formal, and state institutions are effective. So I leave the reader with three interlinked dilemmas: In an economy with a high level of informality, can multinationals credibly orchestrate thousands of spot-market transactions, and still remain competitive? What, if anything, can governments do to square this circle? The third question is an ethical one: To what degree should the multinational be responsible for the actions (or inactions) of its suppliers and sub-suppliers, especially if they are far removed?

About the Author
Rajneesh Narula is a Professorial Fellow at UNU-MERIT and the John H. Dunning Chair of International Business Regulation at the Henley Business School, University of Reading, UK. His research and consulting have focused on the role of multinational firms in development, innovation and industrial policy, R&D alliances and outsourcing, and he has published over 100 articles and book chapters on these themes.
Share this page