Why girls and women flee with birth control

by UNU-MERIT
Europe, human security, migration
Comments are off

Migration risks bringing Europe to a breaking point. It is about refugee boats, borders, Islam — about us and them. These are themes that not only concern society and politics, but also science and academia.

For more than 13 years, Prof. Melissa Siegel has been working on the theme of migration, most recently as Head of Migration Studies at UNU-MERIT. She is currently working on a book about the links between migration and many other themes such as employment, children and health. The subject of migration raises many questions scientifically and influences the lives of many people on a daily basis. “It’s a subject that never gets boring. Migration is simply in human nature. The strange thing is that many societies do not see it that way.”

Siegel recently joined an expert meeting with Dutch parliamentarians in The Hague. One of the questions she was asked was how migrants could be “sent back”. Siegel, herself a migrant from the US, reframed the question and asked if she should go home. “‘No, that’s different’, was the answer, which is so often the case. When we talk about migrants, we’re mainly talking about people who are not like us, who may be less educated or have a different religion, which we perceive as a threat. They either have to go back or stay in the country where they are.”

Lately, Siegel has been researching the links between corruption and migration; corruption as a direct and indirect reason to migrate. “Not being able to find work is sometimes a reason to migrate. But indirectly this may be linked to corruption in the country concerned.” She points to a small survey among Italian academics in Germany and the Netherlands which showed that corruption did not play a role in the decision to leave initially, but once abroad becomes a reason not to go back. “The academic world in Italy is known to be very hierarchical and closed. It’s about who you know. Once outside Italy, they find out that things can be done differently.”

Siegel and her colleagues also look at gender effects in relation to migration from Africa, the Caucasus and Central America. “The likelihood that a woman fleeing has to deal with sexual violence is very high.” For example, border guards demand a higher price from women. When they cannot afford it, they are expected to pay ‘in a different way’. Sometimes they do not get that choice and are immediately supposed to pay in both ways. 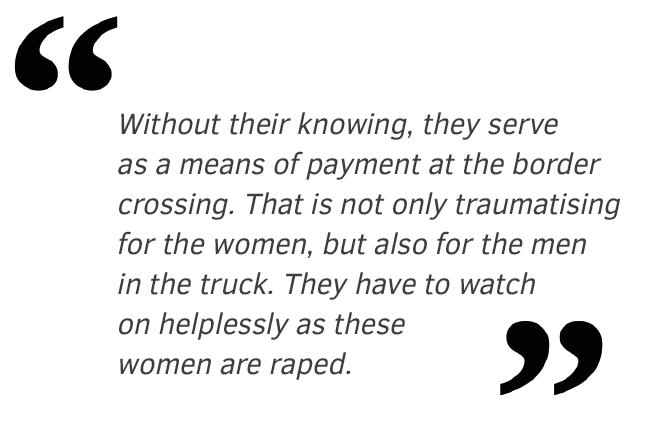 According to Siegel, human smugglers ensure that one or two women are always aboard the trucks that travel through the Sahara on their way to Europe. “Without their knowing, they serve as a means of payment at the border crossing. That is not only traumatising for the women, but also for the men in the truck. They have to watch on helplessly as these women are raped.”

This is just the tip of the iceberg, says the professor. There are so many stories, it is such an urgent and topical theme. On 3 December 2018 The Red Cross released a report detailing that the number of migrant children worldwide has increased fivefold since 2012 – and that many children are exposed to sexual violence, rape, sexual exploitation or trafficking throughout their journey. It is not for nothing that fleeing girls and women, both in Africa and in Central America, often take a birth control shot [which lasts for three months] before departure. “There are also many women who arrive pregnant – unwantedly – in Europe. They have lost their human dignity on the way.”

Siegel is often disturbed by the migration debate, both in the Netherlands and abroad. In this debate, facts and self-reflection are hard to find, she says. “There is a lot of interest in the subject, but not for the facts. In most countries, moreover, only the own little bubble is looked at. For example, if I remind Americans that there is also a lot of migration towards Mexico, they look at me in amazement. What?! When I tell Europeans that 84% of refugees live in developing countries, and not in Europe, I get the same response.” The trend in which people now have their DNA tested for ethnic origin, she calls positive. “This kind of testing provides insight and immediately shows that almost everyone, when he or she goes back a few generations, has a migration background.”