by Katie Kuschminder
Africa, Europe, migration
Comments are off

Eritreans on a bus on the road between Keren and Agordat in Eritrea. Eye Ubiquitous/UIG via Getty Images

Most Eritreans understand the horrors that await them as they travel to seek refuge. Researcher Katie Kuschminder reveals some of the coping mechanisms developed in response.

For years, Eritreans fleeing their homeland have known that, even if they make it to Libya, they will be kidnapped and ransomed. The extortion is systematic. Since the fall of Moammar Gadhafi, the southeast of Libya has been under the partial control of the Tubu tribe, which has established a successful cross-border trade in goods, drugs and people. Kidnappers in this region are ruthless, holding people in appalling conditions and torturing individuals.

Women are particularly vulnerable to sexual violence and can be detained long after their families have paid for their release. More recently, the route of extortion has expanded beyond Libya. Eritreans are now at risk of being kidnapped and ransomed in northern Ethiopia, when crossing the border into Sudan, and when leaving Sudan from Khartoum.

Biniam was kidnapped three times on his journey from Eritrea to Italy. He spent eight months in Ethiopia, but when he left for Sudan he was kidnapped “by the people” in the north, near Gondar. He had to pay for his release and, after eight days, was able to enter Sudan.

In southern Sudan, he was kidnapped and held for one month before being ransomed and then able to reach Khartoum. His aunt in the Netherlands who assisted him with the first ransom payment was unable to pay the second one, so his family in Eritrea paid. Once in Khartoum, he began to work as a laborer to save money for the next leg of the journey.

After three months, he left to cross the Sahara into Libya. In Libya, he was kidnapped and had to pay for his release again. Fortunately, his family were able to raise the money and, after seven months, he was delivered to the coast.

“Every day we lose so many lives,” Biniam said, “By the soldiers of Eritrea, at the border and while crossing the Tekeze river in Ethiopia and especially in Libya. Many people die, more than the ones that make it. Our sisters were victims of rape and are forced to stay there with the smugglers as sex slaves, even after they [have] paid.”

The perils of the route to and through Libya are well known among the Eritrean community. Women and families in particular have developed strategies to reduce risk. First, couples and families rarely migrate to Libya together. One reason is the cost of ransom is clearly higher for groups.

By migrating separately, the ransom is smaller and more affordable for the family. The second person leaves when the family has had time to save in anticipation of a fresh round of ransom payments. Most families do not have the resources to pay large sums all at once, even though it may be cumulatively more expensive to pay two sets of ransoms over a longer time period.

Second, people know that they risk death in the Sahara, at the whim of kidnappers and at sea. Migrating separately is a risk-diversification strategy. Third, Eritreans are aware that women are liable to sexual assault. If the husband tries to intervene to prevent his wife from being taken, he is at risk of being killed for challenging the smugglers.

Finally, it is also known that pregnant women or those with young children may receive better treatment from the smugglers. Tirhas said she was given preferential treatment because she traveled with a young child: “While we were on our way to Khartoum we were kidnapped by the Rashaida people. They told us to bring $10,000. We were four at first, including my son, but then they brought another 21 people and then separated us into two groups. 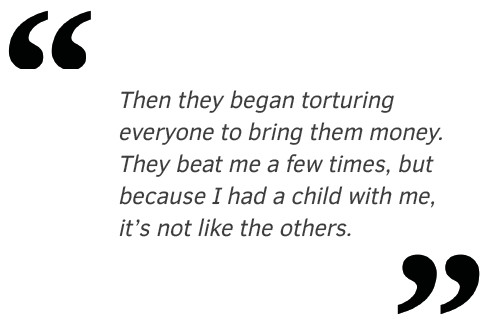 “Then they began torturing everyone to bring them money. They beat me a few times, but because I had a child with me, it’s not like the others. The men were beaten naked. There was one man who suffered more than anybody else in the room because he didn’t have anyone from the outside [to pay the ransom].”

“After I stayed for three weeks there, my brother from Germany paid them $6,000 and then a Rashaidan woman took me to Khartoum. She paid $200 for me to enter Khartoum and connected me with people who can take me to Libya. I stayed for five days in the process before entering Libya. They told me they will take care of me because I had a child with me. Then we crossed the Sahara and entered Libya.”

Tirhas was able to pass through Libya without problems assisted by the Rashaidan woman from the initial kidnapping.

Other women have developed strategies to try and protect themselves in Libya. Adiam only left Sudan to make the journey to Libya with her young daughter when she knew her uncle in Israel had enough money to pay the ransoms. Her uncle did not want her to go because it was too dangerous, but she felt that staying in Sudan was no safer.

She left for Libya and told her friend to call her uncle and prepare the money. When she was kidnapped and told to call for money to be transferred, her uncle was able to do it immediately. She was released and was able to pass through Libya unharmed in less than a week.

Eritreans face exceptionally dangerous journeys long before they set eyes on the deadly Mediterranean. Yet they still travel. Of the nationalities arriving in Italy this year, Eritreans were the second-largest group. The costs endured by these refugees to find a place of safety and security is a global human rights atrocity. Urgent action is required to assist Eritreans stuck in Libya and elsewhere along this tortuous journey.

This article was originally published on Refugees Deeply. Read the original article.