Why and how do some female child carers in Lesotho manage to stay in school despite being responsible for running a household? This was the question that researcher Brenda Yamba, originally from Zambia, wanted to answer. She defended her PhD at Maastricht University last June.

“Brenda was what you might call a model student”, her supervisor Melissa Siegel says immediately. “In addition to being disciplined and eager to learn, she also dealt extremely well with feedback. She was hugely motivated to get her PhD while holding down a full-time job, which made her a pleasure to work with.”

Positive view of the future

It was no coincidence that Yamba decided to dive into this subject. “I’ve been focusing on vulnerable children in Africa for years thanks to my work as a programme manager and adviser at organisations like Save the Children and the United States Agency for International Development (USAID). I’m constantly surprised at how strong and resilient many are, so I wanted to figure out what could explain this attitude to life.”

Yamba’s research showed that girls who take on the role of caregiver have different coping strategies, or ways of dealing with stress, which enable them to stay in school. “Their care tasks continued to occupy them during the lessons. But for many girls a positive view of the future was the most important factor preventing school dropout and allowing these teenagers to continue to fulfil their dual role. External help, too, as well as support within the family, school and community, all foster their resilience and help them keep up their attendance.”

Melissa Siegel (1981) was born in the USA. She is a professor of Migration Studies and Head of Migration Studies at the Maastricht Graduate School of Governance and UNU-MERIT, where she manages several migration research projects, coordinates the Migration Studies specialisation as part of the master’s in Public Policy and Human Development and heads the diploma programme in Migration Management. She also leads the research on migration and development at the Maastricht Centre for Citizenship, Migration and Development (MACIMIDE).
Brenda Yamba (1967) was born in Zambia and studied at the University of Zambia. She completed her PhD in June 2017 in Maastricht, where she participated in the Dual Career Training Programme in Governance and Policy Analysis (GPAC²). Fellows enrolled in the GPAC² hold jobs that allow them to spend a minimum amount of time on research eventually leading to a PhD. Yamba now lives in Pretoria, South Africa, where she works as senior regional adviser for orphans and vulnerable children for USAID in Southern Africa.
— 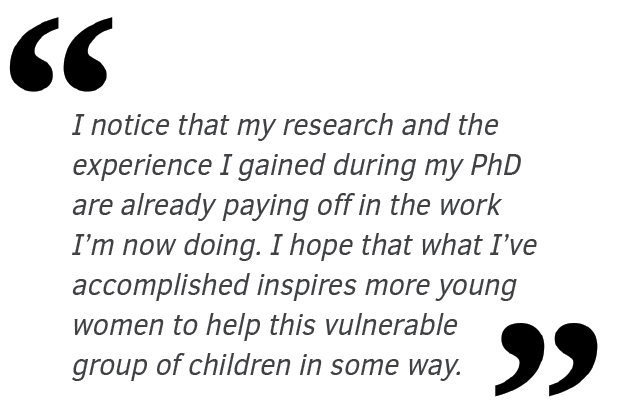 Yamba’s data consisted of interviews with the teenagers themselves, but also with teachers, policymakers and employees from a range of societal organisations. “The university pointed me towards Melissa as the ideal supervisor for the type of research I was doing, and looking back I’m happy with this choice. She’s an expert in qualitative research and she knows parts of Africa well, having done projects in countries like Rwanda, Morocco and Nigeria.”

Although Siegel only came on board in the latter stages of Yamba’s research, the two immediately hit it off. Siegel: “Brenda came to Maastricht twice a year for an extended visit, and otherwise we did a lot of emailing and Skyping.” The synergy between them meant Siegel, in turn, learnt a lot from her PhD candidate.

“Although I know parts of Africa reasonably well, Lesotho was new to me. I came to know more about it from Brenda and from her approach to the research. AIDS has had a huge impact on the country. Mortality rates are high and as a result Lesotho has many orphans. Thanks to Brenda I was able to learn a lot about how they live and the care structures surrounding them. Brenda’s stories were always inspiring. I consider her a role model, not only for her own daughters, but also for other PhD students. And it was nice to see from close up an African woman getting her PhD.”

Although Yamba’s research was on the positive factors motivating the girls to stay in school, she often felt powerless. “Especially when I spoke to the girls myself and realised how high the chances were that they’d quit. Knowing I couldn’t do anything concrete at that time to help them was sometimes hard to deal with.”

Yamba made a number of recommendations to policymakers that should make it easier for teenage girls in Lesotho to stay in school in the future. She calls for more secondary education to be provided free of charge, and for teachers to be trained in providing specialised psychological support. “And school programmes need to be developed that promote support among fellow pupils and community members for vulnerable groups such as these teenage caregivers.”

Yamba may have a little more breathing space now that she has finished her PhD, but the work doesn’t stop. Based in Pretoria, she works as an adviser for orphans and vulnerable children for the regional HIV/AIDS programme of USAID Southern Africa. “I notice that my research and the experience I gained during my PhD are already paying off in the work I’m now doing. I hope that what I’ve accomplished inspires more young women to help this vulnerable group of children in some way.”

This article orginally appeared on the Maastricht University website.
Text by Graziella Runchina, images by Herman Pijpers.
Share this page