by UNU-MERIT
Africa, ICT, policymaking
Comments are off

Information and communication technology is developing rapidly in Africa – but there are worrying trends, such as a growing digital divide between men and women, and between urban and rural areas. These are the basic findings of a new policy note by Prof. Samia Nour, an affiliated researcher at UNU-MERIT.

The author investigates some of the main causes of the digital divide, including differences in economic development, literacy, schooling and education levels. She then delves into the major characteristics of the divide. For example, “the digital divide by gender is 23 percent in Africa, the highest of all regions in the world, almost twice as high as the global average of 12 percent,” says Nour.

“Moreover, there is the digital divide in terms of urban / rural location. This divide is very large in parts of sub-Saharan Africa. For example, in Zimbabwe 36 percent of the urban population use the internet, but less than 7 percent of the rural, according to ITU [the International Telecommunication Union].” Then there are the language challenges: “The English language has a dominant position in the ICT domain [but] less than 20 percent of Africa’s total population speak English as either their native or a foreign language,” says Nour. 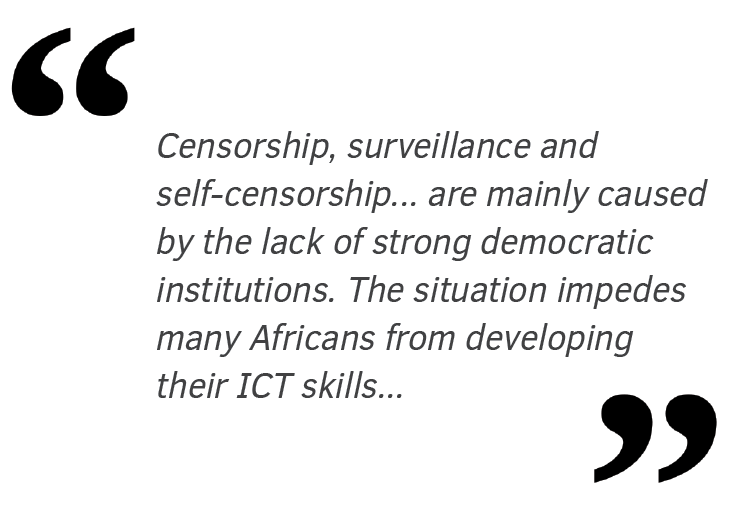 The author also considers the effects of Internet shutdowns in 2017, including in Ethiopia on 30 May and Congo-Brazzaville on 11 June. “Censorship, surveillance and self-censorship, which often follows in the wake of surveillance, are mainly caused by the lack of strong democratic institutions. The situation impedes many Africans from developing their ICT skills and deriving educational and entrepreneurial benefits from full access to the internet. Hence, it contributes to the global digital divide. The trend seems to be towards increased government abuse of internet users’ rights.”